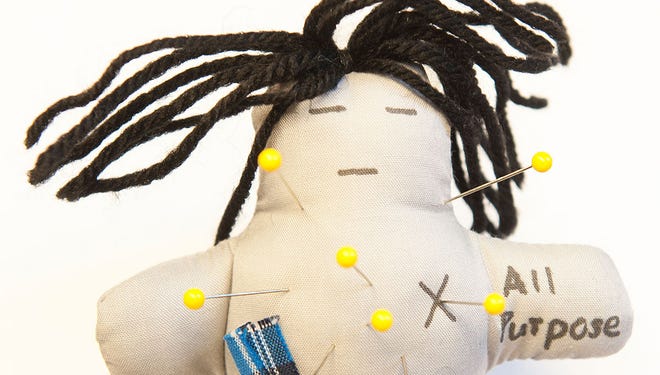 If you are a follower of mine, there is a good chance you already know I'm an investigative journalist. And you may also know from my work that I've become quite an expert on curses over my illustrious career. So much so that even my national media buddies consider me their go-to guy whenever they want to know if somebody in the sports world is saddled by a curse or not.

My claim to fame? I have a real Voodoo Ph.D. (a doctor of potions and herbs degree), and I was the first to successfully diagnose the curse on Carson Wentz. I was also right about the Titans #42 and #10 jerseys being cursed and so many others, too many to mention.

But this time, I really blew it: I totally whiffed when it came to confronting one of the most potent curses in the National Football League in the past 15 to 18 years: "The Clowney Curse."

This terrible curse most likely cost the Titans an easy 2020 Superbowl win, so this curse ain't no joke, it's a real thing, and it's as serious as a heart attack!

I will tell you how I unexpectedly stumbled across the Clowney Curse and about what the Voodoo prophets say will happen to the Titans in 2021. And I'm also going to tell you how this curse turned a perennial playoff contender, like the Houston Texans, into the worst team in pro sports.

I remember the exact moment I first found out about Jadeveon Clowney being cursed, just as if it happened yesterday.

It was immediately after Clowney's vicious hit vs. Michigan in the 2013 Outback Bowl. There was a lot of buzz about that play. A lot of it came from Voodoo enthusiasts and practitioners. And for as long as I live, I'll never forget the words coming from this blind, 103-year-old Voodoo queen. She simply told me, "Dat boi is cussed." I remember thinking at the time that that old lady was nuts and probably senile, even though I knew she had been in the game for years, and she had never been wrong about a curse before.

That Clowney hit had to be perhaps one of the most incredible defensive plays I've ever seen. But I just couldn't wrap my brain around how someone with so much obvious talent could be cursed.

So, I would argue with people about the Clowney Curse. First, I would tell them how much I knew about curses, and I'd remind them of my credentials. And then, I'd say that there was NO WAY the curse on Jadeveon was real. How could it be real when Jadeveon hasn't even taken a snap in the NFL yet?

But some within the Voodoo community would give me details and distinguishing characteristics about this particular curse. They'd explain that it's the type of curse that will follow Jadeveon from team to team.

They also gave me foreshadowing predictions. For example, they said Jadeveon would initially spend his first few years in the NFL with one team. Then the curse would force Jadeveon to have to go somewhere else, and he'd eventually have to seek one-year deals and then move on to other franchises in his attempt to try to stay ahead of the curse.

The notion that Jadeveon was cursed still didn't make much sense to me, and I was even more confused about Jadeveon and training camps. I could never understand why he hated camps so much.

I was told that Jadeveon didn't hate camps. He avoided minicamps, OTA's, and training camps because it had something probably to do with him wanting to limit the curse's exposure on his teammates. They said the curse was so powerful that it would spread to everyone in Jadeveon's sphere.

They continued to explain that the Clowney Curse would start out by attacking all the former first-round picks on whatever team Jadeveon was playing on at the time. After that, the curse will make its way to wreaking havoc on all the other players, coaches, waterboys, and everyone and everything else associated with that team. Finally, they said that if Jadeveon is on a particular roster for a prolonged period, the curse will eventually take over that entire NFL franchise and could continue to inflict damage on that team for years, even well after Jadeveon is long gone.

Fast forward from back then (the year 2013) to seven years into the future: Jadeveon and his curse had been run out of two NFL franchises, and he was now in Tennessee. And I was in denial. I was still the world's biggest Clowney Curse skeptic as there were clear signs that a curse had taken a firm hold. Even a dead Ray Charles could see that!

It wasn't until I started seeing some unusual and odd occurrences before I changed my opinion about the Clowney Curse.

Anybody that knows anything about curses knows that a curse will cause people to lose their minds. The clincher that persuaded me was when I saw what happened to the Titans' 2020 first-round pick Isaiah Wilson. By all accounts, before the curse, Wilson was a steady, thoughtful, and genial person. Then the curse hit him, and all of a sudden, just like a lightning bolt, he snapped, and he lost his damn mind and thought he was a rap legend.

Vic Beasley was another former first-round pick affected by the Clowney Curse, but he had already lost his damn mind before he got to Nashville.

And then there was Adoree Jackson, a Titans' former star cornerback and another former first-round pick. Adoree's damn mind was okay. It was Adoree's damn knee and damn ankle that caused him to be mysteriously placed on injured reserve on opening day.

Every single one of Jadeveon's former first-rounder teammates in Tennesse had been either beset by injuries or had regressed backward in their play. So it was scary just how accurate some of the Voodoo predictions were.

The Voodoo predictors also said the Clowney Curse would be big trouble for NFL franchises, and they were right. The Titans had a historically lousy 3rd down defense, and COVID shut down their facility more times than any other team in the league.

And the predictions were right about Jadeveon's first few years in the NFL too. The Voodoo community had told me that some freaky curse-type things would happen to the team that drafted Jadeveon, and it happened to the Houston Texans in spades, almost precisely how the Voodoo prophecy was explained to me.

Former Texan JJ Watt was the DPOY multiple times BC (Before Clowney), but Watt had regressed and began to have numerous injury issues immediately after Jadeveon was drafted. Watt, of course, was a former first-round pick.

Bill O'Brien was Jadeveon's first NFL head coach. By all accounts, before the curse, O'Brien was a steady, thoughtful, and genial person. Then the curse hit him, and all of a sudden, just like a lightning bolt, he snapped, and he lost his damn mind and thought he could be a coach and a GM at the same time.

The skill level of the Voodoo'ers and their ability to forecast the future is through the roof. These guys are real pros. They run circles around me and everything I know about curses.

I can't help but wonder what would have happened to the Titans 2020 season if I had believed my Voodoo friends and taken the Clowney Curse seriously from the beginning.

What if I had just told someone, anyone, about the Clowney Curse? What if I had warned the teams' controlling owner, Amy Adams Strunk? What if I had bypassed the security at Saint Thomas Sports Park and kicked in the doors. And burst right into Miss Amy's office and got all up in her grill, screaming and yelling at the top of my lungs like a wild man, warning her to heed the Voodoo prophecies? I wonder what would have happened if I had done that?

And I wonder what would have happened if I had told Titans fans that Jadeveon Clowney is not a villain? Because he's not. Jadeveon didn't ask to be cursed.

Right now, he's with a new team, and he's talking a lot of trash and saying many negative things about his time with the Titans. But my Voodoo friends recently pointed out that Jadeveon protected his Tennessee teammates from the curse when it really mattered.

I was told that Jadeveon purposely placed himself on injured reserve about halfway through the 2020 season, and "things could have been a lot worse" for the Titans had Jadeveon stayed in Nashville longer than he did.

Since Jadeveon initially arrived at the Titans a week before the 2020 season opener, he essentially was at the Titans facility for around 60 days. Which was long enough for the Clowney Curse to give the Titans headaches but not enough time for the curse to really get its sea legs.

My friends in the Voodoo community told me that Jadeveon played in Houston for five seasons, which is a whole lot different from being on the Tennessee roster for two months. So five years was more than enough time for the curse to deeply embed itself in Houston.

The national media mocked Houston for their moves, but Houston thought their actions would help them avert future curses or stop the current one, but curses don't operate that way. Instead, a curse is like a nasty, incurable STD that has to run its course — at least that's what my Voodoo friends told me.

So now you know how the once-dominant Houston Texans became the worst team in professional sports.

Jadeveon Clowney is long gone, but the Clowney Curse will officially continue to be with Houston's former first-round picks and their entire organization for many years to come.

And what about the Tennesse Titans and their 2021 season and beyond, you may ask?

According to my Voodoo friends, the Titans have been given a clean bill of health; they've rid themselves of the Clowney Curse, and that's official too.

I've said it before, and I'll say it again about my Voodoo friends: These guys are real pros.