How does the Tennessee defensive front seven look heading into the 2015 season?

Ray Horton and Dick LeBeau will have their hands full trying to turn this Titans defense around in 2015. This group was a letdown last year, finishing in the bottom half of most meaningful categories. Run defense in particular was a big problem with this squad. The lack of leads and ball-control from the offense didn't help matters much (something that should be improved this year), but it doesn't take this squad off the hook either. In year two of the 3-4 installation, it is now a good opportunity to evaluate the Titans roster and see how the alignment may look on opening day.

In Horton's 3-4 Hybrid scheme, the under-end has to not only be a space-eater, but also possess the athletic ability to pass rush as well as prevent blockers from getting to the second level ("Keeping the linebackers 'clean'"). There was a lot of talk before last year about how much Casey's role would change, given his tremendous success as a 4-3 DT in the prior defense under Jerry Gray. His primary fit didn't end up changing much, but he was asked to do more. While the numbers may not have been quite as favorable as his 2013 year, he was a consistent bright spot on a defense bereft of them last season. Casey continues to show his explosive first step, which he employed to penetrate offensive lines and disrupt opposing backfields.

The Titans have have done some work to alter their defensive line configuration over the past few years, but Casey is still the primary starter here. Mike Martin, rookie Angelo Blackson, and Karl Klug will also likely get time at this spot.

Horton and LeBeau demand a lot from their Nose Tackles, and rely on them to anchor the line. They must be quick off the snap, and be strong enough to command the double team. Hill was solid, if unspectacular in this role last season, but carries an injury that is lingering into training camp. Second year DaQuan Jones has an opportunity to get some playing time here, possessing the strength and body type that the staff prefer at 322 pounds. Al Woods was an expensive backup that the team picked up from the Steelers last year, and he saw very few meaningful snaps in 2014. I don't expect anything spectacular from him this year either, barring a standout camp performance. As with last year, Horton, and now LeBeau, will likely employ a healthy rotation here, talent permitting.

The defensive end opposite the under spot demands a balanced player who can fit the run. Pitoitua was the go-to man last season, with Derrick Morgan making the transition to OLB. Pitoitua is an under-appreciated player at this juncture, who is solid if unspectacular. His main strength is in run defense, as he offers little as a pass rusher. He caught a lot of criticism for this deficiency. The Titans were rarely in a position to pin their ears back and focus on pass rush last year, however.

If that trend changes this season, Karl Klug could also see time here. His undersized stature and pass rushing expertise makes him an ideal pair to the 2-dimensional Pitoitua. UDFA Derrick Lott is a name to watch in camp. It would be an uphill battle for him to make the roster, but he is an intriguing fit here with a lot of promise.

The Elephant plays a vital role in Horton's 3-4 hybrid scheme. Outside containment and pass rush ability is the name of the game. With both Kamerion Wimbley and Shawn Phillips gone, Derrick Morgan is the primary starter here. Titans fans should feel better about this spot than they did at the same time last year, as Morgan shined in his first year as a "stand-up" linebacker. As I have said in the past, he will likely never be a 10-sack per year guy, but his balance against both run and pass will be important for Tennessee moving forward.

Horton and LeBeau's defenses are heavy rotating units, and having multiple players to fit into this role is crucial. When you factor in the injury risk, this depth becomes ever more important. The Titans claimed Jonathan Massaquoi off waivers from the Falcons over the Summer, and he could fit in well at this spot as well. Behind him, though, depth is almost non-existent. Look for the team to possibly sign another team's cut to reinforce this spot.

The Sam Linebacker in this scheme has to be versatile and explosive. They will be asked to play both run and pass, and more importantly, put intense pressure on opposing quarterbacks. This roster spot has been cleaned out over the past year, with Brian Orakpo brought in to fill the starting role. The Titans will utilize Orakpo as a primary pass rusher with the athleticism to chase down backs on the perimeter. His tape as a member of the Redskins (while he was healthy) is extremely positive, and bodes well for his fit in Nashville.

The team also drafted Deiontrez Mount over the Summer, who will learn behind Orakpo this year. He possesses the size needed to hold his own at the position, and will hopefully develop as a pass rusher in the next year or two. As with the Leo spot, depth is lacking.

The Horton/LeBeau "Will" linebacker plays closer to the line and is focused on defensing the run. Brown is coming off injury, but has the physical tools needed to play on the interior. These physical advantages will allow the team to use creative blitzing schemes, especially with stunts. His speed and instincts are valuable assets for the Titans to take advantage of. Brown has shone in the past as a pass rusher as well, but he has been a very up-and-down player over the past few seasons. If he can return to his rookie form, the team will likely fare much better against the run than they did last season. If he doesn't, the team will be looking for a new ILB in the draft next Summer.

Horton's "Mike" linebacker must be versatile enough to drop into coverage, as well as play the run aggressively. Williamson was one of the lone bright spots on this defense last season, and fits the mold to a tee. Highly instinctual and physical, Williamson will be tasked with commanding the defense and striking a vital balance on the interior of this defense. Much of the defenses run-stopping responsibilities will fall to him, and the unit's performance in this role is something the Titans desperately need to improve upon from last season. If Williamson can continue to grow in this role, the Titans will have their first true run-stopping ILB since Stephen Tulloch. Embarrassing, but true...

Behind him, Wesley Woodyard can play in his ideal role of a sub-package pass defending linebacker. With the speed to match opposing tight ends and the awareness to play in space, Woodyard will be given the chance to improve on his performance from last season. He's not an ideal run-fit linebacker, however; and his role will be limited by this weakness. The Titans will employ him to track down screens and delayed release routes by running backs. 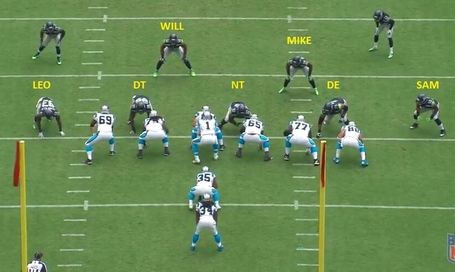 I used this picture in a piece last year to give a visual representation of where these roles fit in Horton's 3-4 scheme. In the picture above, the Seahawks are lined up in the 3-4 under. Equating this to Tennessee's roster, and my above projections, from left to right would be: Brian Orakpo (LEO), Jurrell Casey (DT), Zach Brown (WILL), Sammie Hill / DaQuan Jones (NT), Avery Williamson (MIKE), Ropati Pitoitua / Karl Klug (DE), and Derrick Morgan (SAM).

Camp has just begun, and many of these alignment slots may be altered with additions (and subtractions) to the roster. But this gives a better picture of what this team will look like on the defensive side of the ball come week one.