An abbreviated film review this week. My football soul can't take any more.

Share All sharing options for: Titans-Bengals Film Review: The Play the Music Died

I was out of town this past weekend.  My exposure to the game was limited to ESPN updates, and NFL RedZone glimpses.  I'm grateful for missing this game.  Heading back home from the weekend, I felt, in many ways, that I had been spared.  Then, the All-22 came out.  Curious about the QB performance first and foremost, I immediately watched every one of Locker's throws.  I wish there was a way to escape the images now ingrained in my brain.

Unlike the conventional broadcast, the All-22 is presented without audio.  As I watched these throws, though, I couldn't escape the feeling that it was missing the overlayed audio present in those depressing, SPCA late night commercials with Sarah McLachlan.

There we go.  The depressing overture this film was missing.

We'll look at only one of Locker's throws from this game.  Mostly because I don't have the desire to review a game that I view as an even worse performance than the previous game (which, as the time I though was his worst as a pro - I'll let you do the math there).

The throw we'll review is the one you'd expect us to review.  The interception at the end of the second quarter. 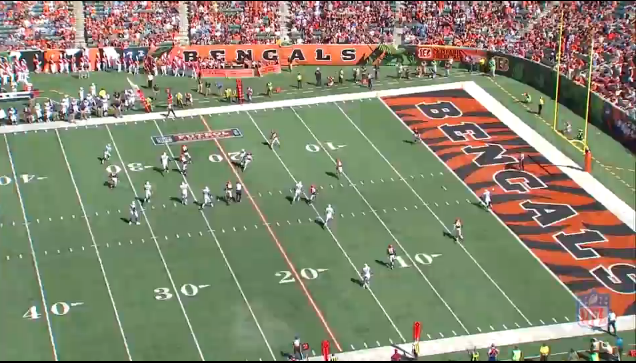 This is what Jake Locker was seeing.  In many ways, it's a microcosm of Locker's career.  When you see the still, there are probably ways to dismiss it, if you were so inclined.  He does look open, after all.  But, it also highlights one of the fundamental issues with Locker's game.  He's playing a dynamic game with a static state of mind.  It's that old Wayne Gretzky saying, "Skate to where the puck is going."

Locker doesn't play that way.  The anticipation isn't there.  The game is moving too fast.

The throw into the end zone that was intercepted, obviously you would like to have that back. What did you see?

When did you realize he wasn’t wide open?

"When the guy caught it."

This ball can't come out.  If it does, it certainly can't be thrown to this spot.  He's throwing to a point in time that no longer exists.  And, the safety makes an easy play on the ball.

Heading into this year, I was looking for improvement from Locker, but I actually think we're seeing regression.  The offense has changed and he's not adapting with it.  Now, more than ever, the game appears too fast for him.

There are numerous plays from this game that could further that point.  I just don't have the energy or the interest in going over those.  Mostly because it seems pretty clear, at this point, that Locker's career in Tennessee is over at the end of this season, and possibly sooner.  In my opinion, the things that are showing up on tape aren't the sort of issues that get resolved in a short period.  The only fix is reps.  And, I don't mean a few weeks worth of practice reps.  I mean the thousands of QB reps he missed as a high school and college player when he was playing in systems that didn't require much QB play from the pocket.

As I've said many times before, I hope I'm wrong.

The game wasn't all bad, though.  Well, it was mostly bad.  Almost exclusively bad.  But, at least we saw some flashes from two of our young rookies:  Bishop Sankey, and Avery Williamson.

Decision at the point of attack.  We've missed it at the inside linebacker and RB spots for years now.  And, these two young rookies are flashing special things.

So, turn up the volume, hit play, and let Sankey, Williamson, and Wilson Phillips guide you.  Just hold on.