Titans vs Bengals: A Review

A look back at the Titans debacle against Cincinnati.

Share All sharing options for: Titans vs Bengals: A Review

The Titans had what can only be described as a miserable outing against Cincinnati over the weekend. They were thoroughly beaten despite matching the Bengals in most offense categories. Below we take a deeper look at the loss, and break down performances by position group.

The Titans offense averaged a solid 5.1 yards per play, but converted at a paltry rate of 16% on 3rd down. There was notable discord on that side of the ball, where the passing game never seemed to get going and Cincinnati had the upper hand. As for Jake Locker, the performance at Quarterback was poor for the second week running. Locker looked uncomfortable, and more than once bailed from the pocket when he didn't need to. The deep throw was off all day long, and Locker's confidence seemed shaken by the second half.

That said, there were a few bright spots. Below I have posted some still shots of Jake's first interception. While it is difficult to glean a silver lining from such a negative play, it wasn't a bad throw on Locker's part here. Let's look closer. 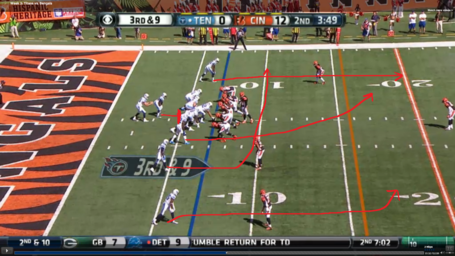 The Titans run a flood play to the left side of the field. Washington runs the deep post, Wright a soft drag route underneath, Delanie Walker carries a shallow cross to the left, and Hunter hits the vertical. The Bengals blitz an extra man, and Locker has already identified it. 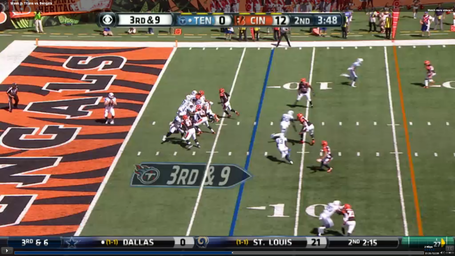 The Titans Offensive line and Shonn Greene pick up the blitz and hold back the first push of the Bengals defenders. Locker surveys the field from a clean pocket, and can see what is likely underneath zone coverage from the Bengals linebackers. Wright is covered, Washington is being jammed off the line, and Hunter is yet to break into the deep secondary. Delanie Walker is in traffic, with eyes on the space behind the linebackers. 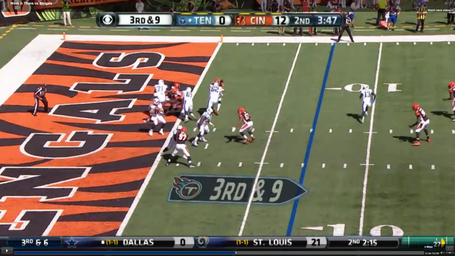 With the pocket still clean, Locker climbs and steps into the throw. Wright is open at this point, but it's clear that a completion to him here won't get the necessary yardage for a first down. Locker cuts the ball loose to Walker, who is one on one on the intermediate crossing route. The ball hits it's target, but bounces off the hands of Walker (which a case can be made that he is being interfered with by the defender), and into the waiting arms of Geathers for the interception.

Locker needs to play better across the board if he's going to remain as the starter of this football team. We know that potential for success is there; it's whether or not he and this coaching staff can bring it to the surface week to week. Any less is doing the team no favors.

The wideouts had another rough day, and are especially out of place when the play is extended. You would think the opposite in an offense where the mobile Jake Locker is your QB, but they lack direction when the play breaks down and they have to improvise. Delanie Walker was, yet again, the only real bright spot in the grand scheme of things.

The offensive line had a good day, keeping a relatively clean pocket, especially considering the talent of their opposition, and paved some pathways for their running backs, who churned out 149 rushing yards on the day. Andy Levitre again had his struggles, but the breakdowns across the unit were rarer than we've seen in the past. This was clearest when the Titans handed the ball off to Shonn Greene, and better still, to rookie runner Bishop Sankey, who looked unstoppable at times. There were many that lamented that the Titans didn't run the ball more, but they ran plenty vs Cincinnati, just under 40% of their snaps. When playing from behind you're not going to see much more than that.

The Titans defense allowed only 300 net yards, yet they generated a single hurry on Andy Dalton and gave up four touchdowns and 25 first downs.

The front three were quiet throughout the game, lacking the burst to put heat on Dalton when the Bengals dropped back to pass. They were respectable against the run, highlighted again by the efforts of Jurrell Casey. Both the linebackers and the linemen were flat throughout. Derrick Morgan, who had excelled early on in the season, was invisible. Below, I took a few quick snaps of a Bengals pass play that ended up completed to the deep right to AJ Green vs Jason McCourty. 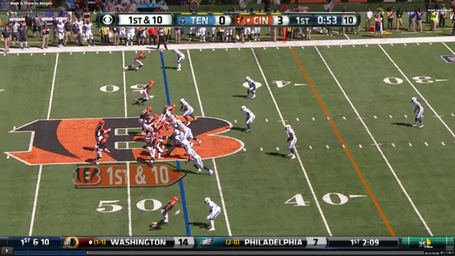 The Bengals see that the Titans are showing a blitz look. They indeed, blitz with five rushers. That gives the offensive line plus the Bengals RB, six blockers to cope. The other Titan linebackers and Bernard Pollard (who has walked up into the box), appear to be in zone coverage underneath. 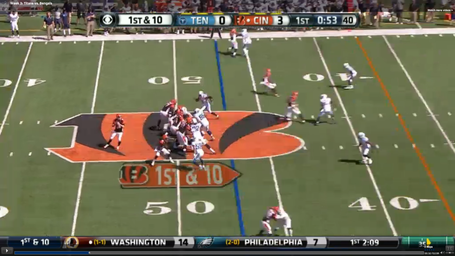 The Titans pass rush is immediately stymied, despite a few one on one matchups, and Dalton has an entirely clean pocket from which to survey the field. For any QB, this is time enough to find a target. Dalton ends up finding AJ Green, who has had time to work over Jason McCourty, and the result is a big first down.

Blidi Wreh-Wilson caught a lot of flak after this game, and there was reason behind it. He struggled covering both Mohammed Sanu and AJ Green, and was a constant source of flags that hurt the team. That said, it has been noted by other analyst that he is practically a rookie as far as his snap count is concerned; but if he's going to be playing in a starting role, he needs to be more consistent than he was against Cincinnati. The safeties were quiet as well, save for George Wilson on his head's up interception.

A magical day of blunder would not be complete with the coup' de gras. The Titans cost themselves by eight points with their special teams play alone (2 field goals missed, 1 safety allowed) and the returners were not able to provide any notable boost to the team's field position, an element in this game that they struggled against constantly.

The Titans have a long way to go before we consider them ready for post season football; and plenty of issues need to be addressed heading into the teeth of their intra-divisional schedule. Performances like this one in Cincinnati can't be repeated.