Breaking Down the Titans Rushing Offense

This article looks at the Titans rushing attack through the first two weeks of the season.

Share All sharing options for: Breaking Down the Titans Rushing Offense

With two full games in the books, I thought this would be an appropriate time to assess where the offense stands at this point in the season with regards to the running game. In addition to looking at the normal things like yards per carry, I want to dig into things like personnel groupings, types of run plays used, running backs used, etc.

In the Titans week 1 win over the Chiefs, Whisenhunt called an impressive 32 running plays, averaging 4.6 yards per carry with the running backs. The Titans mixed in the running game early, then leaned on it especially hard late when trying to kill the clock in the 4th quarter. One thing I noticed about Ken Whisenhunt from his San Diego tape, is that he loves to run the ball from shotgun and out of 11 personnel. I also noticed a nice mix of zone and gap plays at San Diego. Here's how the running plays from Week 1 break down:

This shows that the Titans preferred running under center very slightly to running from the gun.

For those personnel numbers, recall that the first number is the number of running backs in the formation, and the second number is the number of tight ends in the formation. That data suggests, then, that the favorite grouping was 3 WR, 1 RB, 1 TE. Of note, though, the Titans ran 47% of plays with 2 tight ends on the field. Interestingly, in this game they were often lined up on the same side of the ball, creating an unbalanced formation.

In terms of running backs, Greene and McCluster were the clear lead backs, with Sankey getting some late game action, and Washington only being used on two draw plays.

Much to my surprise, I charted 53% gap plays, when I felt like the Titans were relying more heavily on the zone when watching live. However, I did count the several draw plays ran as gap plays, which skews the numbers a bit.

In general, some of this data was skewed a bit by having a comfortable 4th quarter lead. The Titans opened the game by showing some unbalanced 2 TE sets, but for the better part of the game, they were running primarily zone plays out of 11 personnel shotgun, as I expected to see. In the 4th quarter with the game in hand, the team switched over to jumbo packages including at least 2 TEs, and usually 2 TEs and 2 RBs. Those jumbo packages were used very effectively, moving the ball extremely well in the 4th quarter and successfully icing the game.

Week 2 was a different story. The Titans ran fewer plays on offense overall as a result of not sustaining many long scoring drives, and they were playing from behind for the better portion of the game, so the total number of carries from week 1 to week 2 decreased. I only charted 11 rushing plays in the game, all of which came in the first 3 quarters, most of those coming in the first half. The breakdown:

This game showed some similar trends. The Titans favored shotgun running to under center running this time, likely because of the lack of clock killing 4th quarter runs. They strongly favored 11 personnel in this matchup, but still showed a fair number of 2 tight end, unbalanced looks that were prevalent in week 1. The running back breakdown is about what you would expect after week 1, but Washington did not receive a carry in this game. The Titans once again favored zone rushing plays, but still struck a nice balance between zone and gap concepts. The yards per carry in week two was a very impressive 6.7.

One thing that really surprised me was the frequency with which the Titans ran unbalanced, 2 tight end formations in the running game. See one example from the 4th quarter of the Chiefs game below. 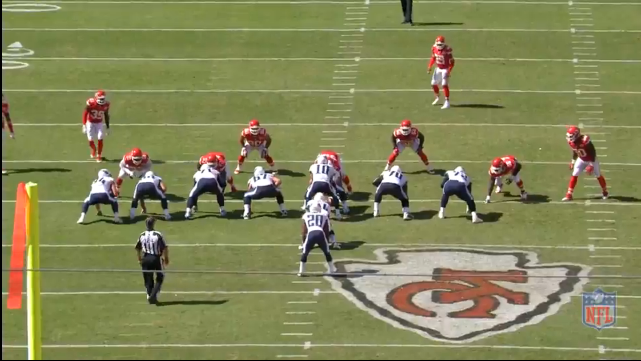 In the above image, the Titans have 22 personnel (2 backs, 2 TEs) in I formation, but note that both TEs (Thompson and Stephens) are lined up to the left side, providing an unbalanced number of blockers on that side. 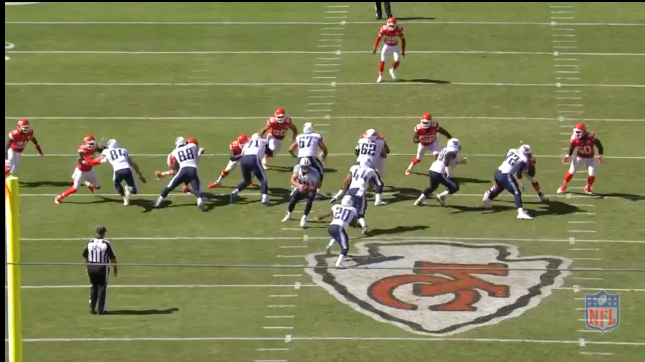 The unbalanced formation has forced KC to adjust their strength to the left, so the Titans run a zone play to the weak side of the formation using the fullback as a lead blocker. 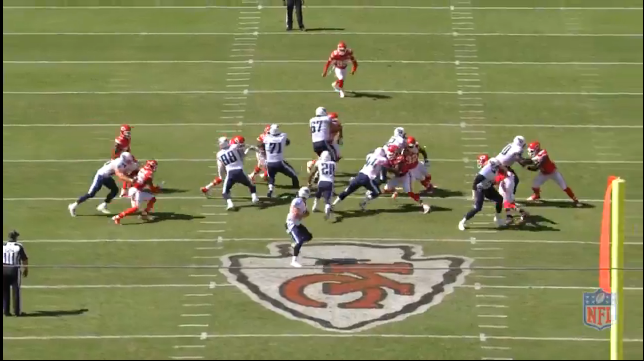 Sankey has received the handoff, and his lead blocker is kicking a player out, so he cuts quickly to an inside gap. While the play is very well blocked in this still, the space is minimal. 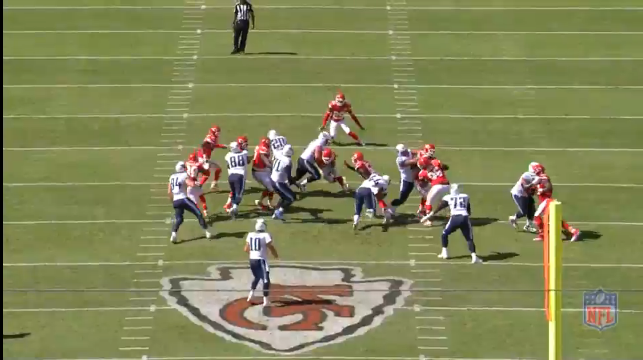 Sankey squeezes through the space on the left side en route to a 12 yard gain that helped keep the clock moving in the 4th quarter.

These types of alignments can put stress on a defense to make sure they are properly aligned to account for every gap. The Chiefs do a good job of aligning themselves, but thanks to good blocking and good running back play, the Titans are able to pick up a nice play on the ground.

Hat tip to SuperHorn for the gif from his film review of this play. Live speed really shows how impressive Sankey was to get the ball, make a decision, and cut up the field for 12 yards in very limited space.