Film reviews are SuperHorn's thing, but I looked at a few plays earlier on Twitter.

Jake Locker was terrible in the first half on Sunday.  This just in.  Here is a look at 3 plays from the Cowboys game, one good, one bad and one ugly, that pretty much define his play in that game.  People want to talk about how good he was in the second half, but the ugly play actually comes from the second half.  Sometimes the statistics don't show how well a quarterback played because he missed some opportunities on the field.  That was the case for Locker on Sunday.

The touchdown throw to Delanie Walker was a thing of beauty.  Locker fit the ball in perfectly between 3 defenders: 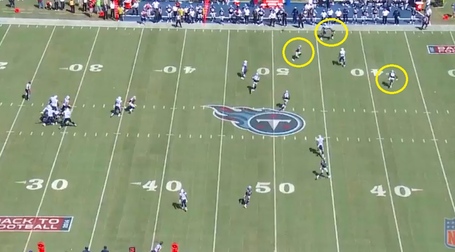 An even better aspect of this play was Delanie's effort.  Check out this view from just after the catch:

This was the first play of the second quarter.  Locker threw a pick on the next play. 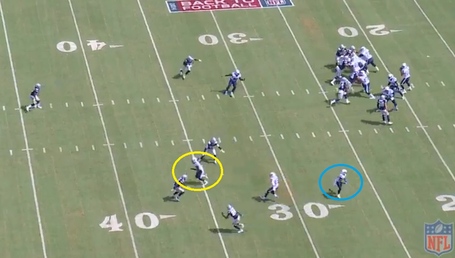 The ball went to Hunter (yellow).  Kendall Wright (blue) was wide open and would have made a big play because he would have had room to run after catching the ball.

This was first and goal from the 6 with the Titans trailing 26-10 in the 4th quarter: 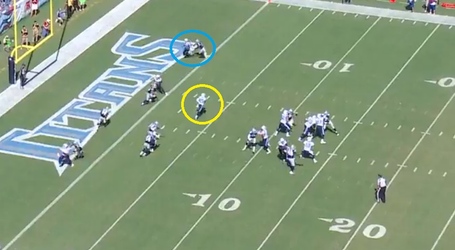 The ball goes to Hunter (blue).  Hunter actually gets a step a split second after this, but the ball doesn't get to him until he is on the other side of the goal post.  All of that should have been irrelevant because Nate is wide open underneath and can walk into the end zone with a decent throw.  That drive ended with the Titans turning it over on downs.

Locker did not lose this game by himself.  You aren't going to win many games when you give up 220 yards on the ground, but Locker could have kept them in this game had he played well.