A quick look at one play that stood out last week.

After spooling through a boatload of tape and re-watching last Sunday's game in Kansas City, I thought it would be a good idea to break down one of Jake Locker's throws that I thought stood out. But first, I want to bring up why.

Ken Whisenhunt called a fine game, not only in his ability to create "easy" reads for Jake Locker, but in his method of dictating the game from the offensive side of the ball, and exaggerating defensive weaknesses. In the play below, Whisenhunt shows unpredictability, faith in his playmakers, and an excellent understanding of how to attack defenses and exploit their coverages and personnel.

First we'll look the the broadcast view of the play. First and 10, on the opening play of the 2nd half, with the Titans on their own 20 yard line. They come to the line in 11 personal. It is worth noting that by operating out of 11 personnel (first number is count of RB's, second is count of TE's), the Titans take Jackie Battle off the field in favor of Justin Hunter. While this may seem like an obvious trade off, it's more than simply picking one player over the other and rolling with it. Playing with different personnel groupings allowed Whisenhunt to keep the Chief's defense guessing in week one. The 11 personnel the Titans went with here forces the defense to adjust (indeed it is fast becoming the "base" for many NFL offenses), and with little sacrifice to their ability to run the ball with the presence of several versatile tight ends who can block, and three talented wideouts who all have their individual strengths. The added heavy rotation of the Titans running backs also helps create uncertainty on the defensive side of the ball.

Whisenhunt knew that Kansas City were relatively thin at corner, and by bringing the extra wideout onto the field, he would likely be facing an inferior player. Whisenhunt also creates problems for Kansas City by his (prior mentioned) unpredictability. Locker got comfortable early on with some easy short routes; digs, curls, and outs. The Titans coach uses those patterns to disguise his intentions on this play.

Whisenhunt splits out three wide receivers to the right side of the formation (Wright, Hunter, Washington from inside out). Delanie Walker lined up to the left of Roos, and Dexter McCluster is split to the left of Locker in the shotgun.

Immediately post snap it's clear that the Chiefs are coming with a standard four man rush. Poe is lined up in the 2 Technique over Andy Levitre, Jaye Howard is in the 3-tech over Chance Warmack, and Brian Schwenke has no one head's up. He will immediately look for the blitz, and after clearing that, double team the DT. McCluster breaks off into the flat, drawing the attention of the outside linebacker. Walker is clearly being targeted with man coverage off the snap. 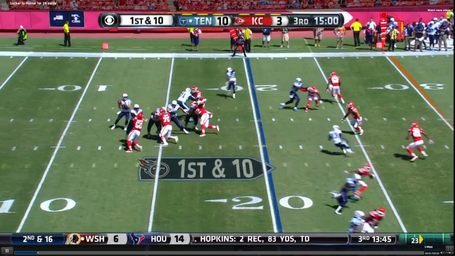 Locker completes his drop, and has a clean pocket from which to survey the field. He can see Wright breaking on the double move (curl inside, then out). Locker can safely eliminate him as an option quickly due to the underneath coverage behind him. Washington runs a quick curl on the outside, clearing out another defender. The main effort is elsewhere however. Locker's first read is making a clean break off the line, drawing single man coverage. Locker sees him the whole way. 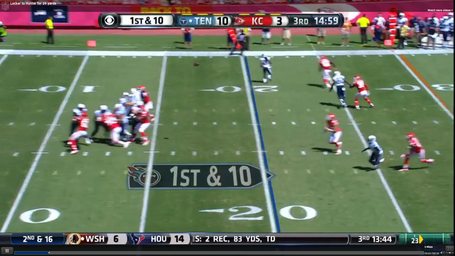 Locker steps up in the pocket to make his throw, giving it enough loft to clear the underneath defenders. The time from snap to release is quick, and his line is able to pick up the pressure. The Chiefs are in man underneath with some underneath zones mixed in (from what I can tell). 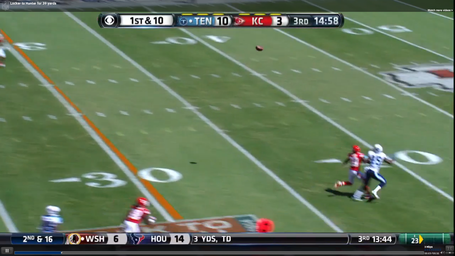 Now to the receiver. Hunter is matched up one on one with the Chiefs corner, Chris Owens, a clear opportunity for the Titans to push the ball down the field. Hunter avoids the press and gains outside leverage, using his speed to get a step on the defender. This is a situation where the Titans choice to run with 11 personnel gives them the advantage; the Chiefs drop one more into coverage, but the lessened pressure doesn't get close to Locker. With Wright and Washington "clearing down" and effectively stripping the outside coverage, Locker has a clear one on one to exploit, and better yet, it's with the Chiefs 3rd/4th corner. Now let's take a look at this same play in the All-22 view. 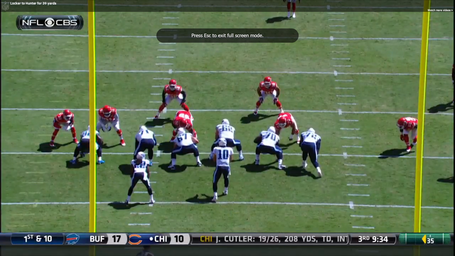 You can clearly see the Chiefs alignment here. They have four clear rushers (disregard the left most defender who's man to man with Delanie Walker). McCluster draws linebacker attention when he breaks into the left flat. The Titans have an extra man (Schwenke) to account for any blitzes. The Titans personnel grouping here limits what the defense can do, without revealing their hand. 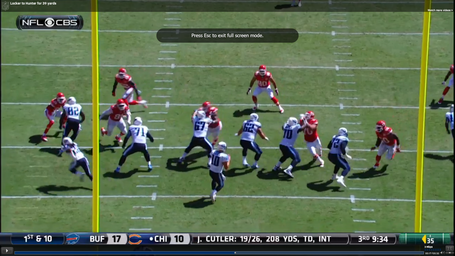 Post snap, Locker makes his drop in a very clean pocket. Warmack and Levitre engage their blocks and don't allow the defenders to gain significant leverage. Michael Roos and Michael Oher keep solid positioning to engage the outside rushers. Center Brian Scwenke checks for the blitz and, seeing none, provides extra support for his line mates.

The line continued to block well, though Levitre is obviously losing leverage on his man, Dontari Poe. Holding on much longer will no doubt draw a flag for holding. Luckily, Levitre is able to drive him into the free blocker (Schwenke), keeping the pocket clean. Locker squares to his target, and steps into the throw.

Again, Locker stands tall and steps into the toss. His point of release is high, where is should be. From the start of his drop to the ball's release, Locker has not been disturbed in the pocket. 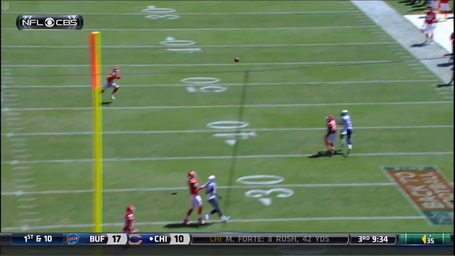 Eric Berry already knows he's late to the party. Justin Hunter has Owens by a step and tracks the well-placed ball as it glides toward him. Wright and Washington's short-breaking routes (patterns Locker had gone to earlier in the game), effectively clear out the deep right quadrant. Without seeing the other safety it's hard to gauge what coverage the Chiefs were running, but on the surface it looks like cover 2 in the deep secondary. Locker's main "read" was Eric Berry and his proximity to the edge. Once Hunter got leverage and Berry was late, he knew he could cut it loose and possibly create a big play. It's worth noting that. given the one on one, the Titans targeted Hunter deep on routes like this. They have faith in him to take advantage of those opportunities. 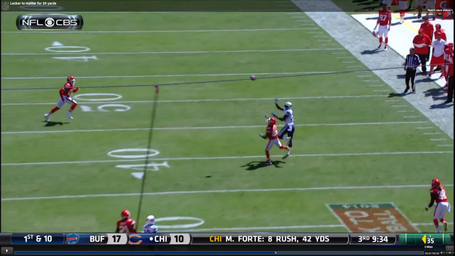 Hunter maintains leverage and times his jump perfectly. The play is one on one all the way, by design, and Locker and Hunter execute it to perfection. On 1st and 10, the Chiefs seemed unprepared for the deep throw. One of Hunter's strong suits has been his ability to out jump defenders, and he goes about his business on this one. 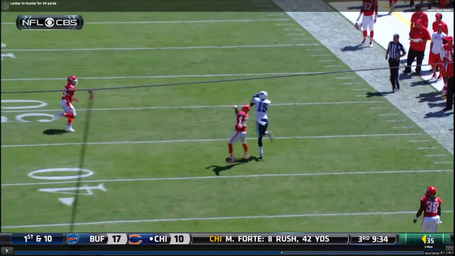 Hunter completes the reception confidently and makes a fast-approaching Eric Berry miss, gaining some yards after the catch. The play was an unpredictable one from Whisenhunt, and one that shows he has faith in Jake Locker to make all the throws.

Ken Whisenhunt's ability to use his personnel to their strengths, as well as to exploit defensive mis-matches, gives me hope that the Titans offense can continue to move the ball well this season. They have an ideal group of skill players to run the 11 personnel grouping, something many teams in the NFL can't claim. What is especially encouraging is the trust Whisenhunt has in his guys to win the one on one battles, and to take the shots when they are there. Unlike last season's opener in Pittsburgh, Locker didn't come out with the training wheels on.

When all is said and done, it is a 39 yard gain to begin the second half. This play set the tone; the Titans aren't going to let off the gas.