The Titans have released their first depth chart after the cut down to 53. There are a few changes.

The Tennessee Titans have released a new unofficial depth chart.  Here is what it looks like: 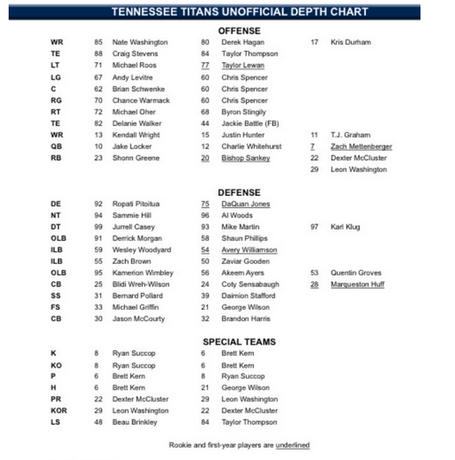 -Bishop Sankey moved ahead of Dexter McCluster.  That also doesn't mean much because McCluster will only be used as a running back in certain situations.  They are going to rely more and more on Sankey as the year goes along.

-Leon Washington is your kick returner while Dexter McCluster is your punt returner.  Ken Whisenhunt said today there is a chance we could see both of them back on punts.

-Chris Spencer is the back up at all 3 interior positions.  I would bet that Taylor Lewan would play guard if one of the guards was going to miss significant time.

-Zach Mettenberger should be the #2 quarterback, but he isn't.