A look at Jake Locker's Touchdown Pass to Nate Washington.

In the aftermath of the Titans preseason game, both Nate Washington and Jake Locker were asked about their explosive passing play.  The fact that they were asked about this play, doesn't come as any surprise.  It was a big play after all.  Their answers, however, gave more insight than we typically get out of players in interviews.

Jake Locker on the TD pass to Nate Washington:

It was something we had seen on film.  They were a team that played quarters, and their safeties played pretty low.  We saw that when we practiced against them.  We had an opportunity there with the route combination that we had.  And, we got quarters.  Nate ran a great route, made a great catch, and we were able to score on it.

Nate Washington on the TD pass:

It was just a move post.  We knew that they were going to be running quarters coverage all day, so our coaching staff has been preaching to us all week to make sure that we have a post and make sure we run it.  So, that was all I wanted to do.  Jake threw an awesome ball.  I couldn't ask for anything else.  The catch was there. 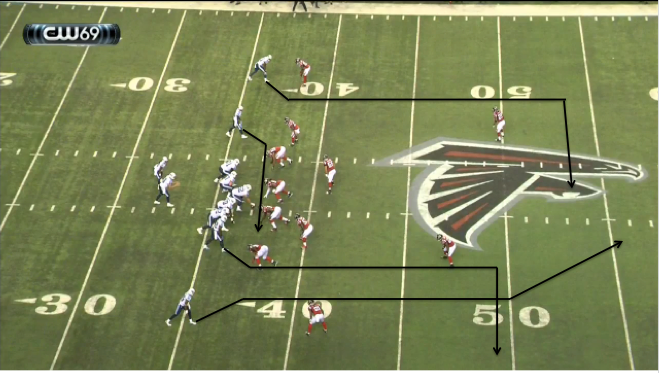 Play diagram is above.  Balanced formation.  Post-Out combination to the strong side of the formation.  Dig-Drag to the weakside.

Before we get into the play itself, a basic understanding of Quarters coverage is important.  If you want an in depth look, I'd highly encourage reading this piece by Matt Bowen.

Here's the basics, though.  It's a 4 deep, 3 under shell.  It's called quarters (also Cover 4) because the back half of the field is divided into 1/4ths.  If we ran verticals out of this look, each safety would take the inside receiver, and each corner the outside receiver.  But, there's a pattern matching element too.  The safety is going to watch the #2 receiver.  If he breaks vertically past 12 yards (behind the linebackers), then he matches up in man.  If he doesn't, the safety can then double the #1 receiver to his side.

With that in mind, let's look at the diagram above.  On the top of the screen, Wright is going to run a drag route.  This frees up the free safety to double Hunter, who runs a dig route and gets double teamed.  One safety occupied.

On the bottom of the play, both receivers begin their stem towards eachother.  At exactly 12 yards, Walker breaks out.  Just after that, Washington breaks for the post.  By Walker running his route to this depth, rules dictate that the safety will take Walker, which leaves #21, Desmond Trufant, all alone.

The route combination on it's own is well designed, but the little nuance of stemming the routes together makes it even better.  By running both receivers so close, and having two defenders pattern matching, it adds just one other element to think about.  And, at the NFL level, a split second can mean a touchdown.  Moreover, they are so close together, that it almost acts as a rub route.

Desmond Trufant plays Nate with outside leverage, steering him towards the middle of the field.  The out route by Walker provides the single coverage (in addition to Hunter occupying the FS with the dig) for Nate.  The design of the routes, and running them so close together, actually ends up giving the Titans a pick play from the Falcons strong safety as he runs between Trufant and Washington to break on the dig.

All in all, beautiful play design and execution.  Locker does a wonderful job of taking a small step forward in the pocket which affords Nate extra time to break free.  And, the read is a simple one.  If that safety breaks, you know Nate has leverage.  Cut it loose.  The ball is then thrown - in a cluttered pocket - with precision.

This play is a great display of a coach who understands the enemy, how to attack it, and how to put players in positions where they can execute.  While the route combination isn't revolutionary, the details are impressive.  I like what I'm seeing out of the offense, and I think we're just scratching the surface.  Whiz won't reinvent the wheel, but he'll get the little things right.  At this level, the details can amount to all the difference.