What have we been able to glean from this 2014 squad to date?

Share All sharing options for: 2014 Tennessee Titans: What We've Learned So Far

The Titans enter this 2014 season with a clean slate and a large number of questions to answer.

Obviously question number one starts and ends with Jake Locker. We knew that Whisenhunt was bringing his own system to Nashville, and with it a whole new set of offensive principles and, more importantly, an entirely new philosophy. When talking with Keith Bulluck last night, he mentioned how much St. Thomas Sports Park has changed since the days he walked in the door; how this is the first true break from the Oiler/Titan regimes that pervaded every inch of the franchise for the past two decades.

In regards to Locker, we're still looking. While the deluge at LP last weekend prevented us from seeing the type of game we'd like out of the young signal caller, it has to be noted that Whisenhunt, despite the conditions, was willing to put Jake in the gun and open up the play calling. That's a vote of confidence in my book, however minor.

We now know for a certainty that the running game has undergone a metamorphosis of sorts. With a new committee approach, with each member specializing in his own thing, the Titans have much more versatility on the offensive side of the ball. The early signs from camp and the first pre-season game have been positive ones. The scheme seems a perfect match for guys like Dexter McCluster and Bishop Sankey. Throw in a tough-nosed short yardage back like Greene and you have yourself a formidable group, and one that doesn't get sunk with one poorly timed injury.

The offensive line should be one of the best in football. Well, we know how statements like that pan out. I wasn't blown away by their play in game one, and definitely have my eye on the unit going deeper into the pre-season. That said, Ruston Webster's decisions to invest in the offensive line looks to be paying off.

"Until somebody else beats them out, I think that's an important thing. It establishes an espirit decor and pride in your unit, and that's important...I think you see flashes of it. This will be a good test this week, and I see them working together. I like what I hear in the huddle when I'm in there with them, so I hope it continues."

- Head Coach, Ken Whisenhunt, on the Titans offensive line practicing together, and forming a cohesive unit, per TitansOnline.com.

This is a deeper unit than I can remember, talent wise. The additions of Andy Levitre, Brian Schwenke, Chance Warmack, Michael Oher, and Taylor Lewan speak to that strategy. Along with the ever-present Michael Roos, the Titans should soon be reaping the benefits, in both the running and passing aspects of the offense.

Versatility has been the name of the game. That has been a primary focus with Ray Horton's defensive group. The linebackers especially have been asked to do more across the board. Derrick Morgan has been given the task to play in space, flip his hips and cover, and also maintain his pass rushing duties. Zach Brown has been bumped inside, as expected. Bulluck made a fantastic point in last night's show, that Brown now faces a big task in adjusting the un-engaged offensive guard, who will likely have a free run at him from this multiple 3-4 front. He'll have to buck the concerns on him once and for all, that he would rather speed around blockers than effectively engage them. 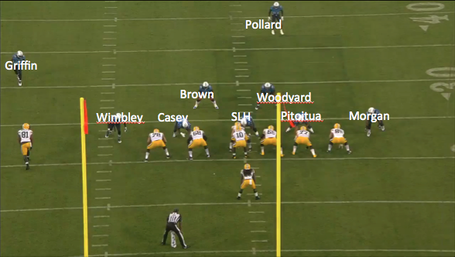 The above image shows the Titans starting defensive unit against the Packers, with more than one surprise. Contrary to our pre-season predications, Morgan was lined up in the Sam linebacker spot (as opposed to the Leo, where Wimbley is slotted), and Sammie Lee Hill was the starting Nose Tackle. While this alignment is by no means set in stone, it gave us a better look at what Ray Horton is trying to accomplish with the unit as a whole. I expect this group to play a lot better down the stretch, especially with less basic fronts and more of Horton's exotic looks/play calls mixed in at a heavier rate.

On the back end, it looks like Blidi-Wreh Wilson is winning the battle outside for the second corner role. I think Coty Sensabaugh will be getting plenty of action regardless of the final lineup. I'll be looking closely in on these two guys as we delve deeper into the preseason. Their performance needs to be sharp if Horton's defense is going to operate at full effect.

We'll know more as he get to see more snaps from the starting units in coming weeks, but we're getting a clearer picture of what the Titans want to do, both offensively and defensively, in the 2014 season and beyond.

EDIT: Credit to SuperHorn for the image from last weekend's game.