This series of articles looks at the fundamentals of offensive line play in the NFL.

If there is a group of players in the NFL that goes truly under-appreciated by the average fan, it's the offensive line. They are integral to the game, but because they don't touch the ball, they're the last players anyone notices on offense. For football fans who "follow the ball" when watching on TV, you may never even notice an offensive lineman until one of them gets beat for a big negative play.

For that reason, there's not a lot of knowledge among the average fan about the Xs and Os related to playing on the offensive line. Personally, I find the battle in the trenches to be the most interesting part of the sport, so I hope to spend a few articles talking about the details of offensive line play.

For the first installment, we'll look at pass blocking.

There are two prevailing pass blocking techniques in the NFL: Man Blocking and Zone Blocking. Man blocking has an offensive lineman focus on blocking a specific player on the defense, and is more often than not called "BoB" blocking. Zone blocking has offensive lineman be responsible for a particular gap instead of a particular player, and it normally manifests itself as a "slide" blocking technique.

"BoB" stands for "big on big" or "back on backer." This means that the offensive linemen are typically responsible for the down linemen and the running backs are responsible for picking up blitzing linebackers, hopefully preventing mismatches where an elite defensive end is meant to be blocked by a smaller running back.

In the purest form of this blocking technique, each offensive lineman will be responsible for the defensive lineman covering him, and block him wherever he goes. Uncovered linemen will help the covered lineman or be responsible for linebackers blitzing as designated before the snap, up to 5 pass rushers total. Then the running backs will often check for a blitz and block if necessary, or release into a route if not.  In the case of an overload, the QB becomes responsible for the free rusher and is forced to get rid of the ball to a hot route or otherwise before getting sacked.

If you ever hear a QB declare a defensive player as "Mike," he's telling his offensive line that they are responsible for blocking that player if he blitzes. This player does not have to be the actual middle linebacker. 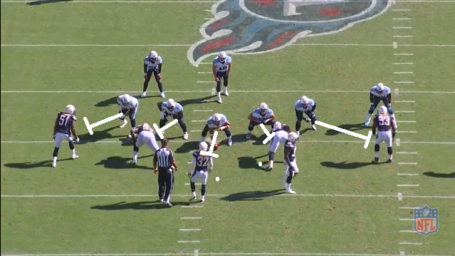 The above picture is a still right before snap where Jake Locker throws a game winning TD to Justin Hunter. If this play were pure BoB blocking (it wasn't), it might have been blocked as above.

With this alignment, Locker may also declare #32 the "Mike" so that Schwenke (C) will be responsible for him if he blitzes. CJ will then watch for a blitz, especially from the remaining box player, and block him if he comes. If nothing breaks through, he can release into a pass route. If #32, the extra box player, AND an additional outside rusher were to blitz (that's a 7 man pressure), Jake would then be responsible for the 7th rusher.

While BoB blocking does a good job of accounting for rushers and preventing mismatches, it can struggle with adjusting to defensive line stunts. If two defensive linemen (or a DL and a blitzing LB) swap gaps after the snap, it becomes hard for the lineman assigned to him to stick on him, and the offensive linemen are forced to exchange responsibilities. This can sometimes lead to confusion, and can be exploited to create free rushers.

One way to combat getting confused by a stunt is to resort to "slide" protection. In slide protection, each offensive lineman is responsible for protecting a particular gap, and he will block whatever defender attacks that gap, either by way of conventional rush, stunt, or blitz.

If a slide protection is called, the linemen will all defend the gap either to their left or to their right. This is a good pass blocking technique to use off a play action for a zone running play, or to protect a QB rollout to one side of the field.

In the above picture, imagine everyone protecting the gap away from the TE, or stepping to their right (to the left of the image). If the players all rush the gaps they are aligned in, Roos may block the 3 technique, and the TE or RB would be forced to block #53. If no other blitzers come, though, Levitre and Schwenke are left without anyone to block, while either a TE or a RB are responsible for a DE. Therein lies the downside of pure slide blocking--sometimes your backs and TEs may be forced to block some of the defense's best pass rushers while some of your better pass blockers are left looking for something to do.

What is the response of most offensive coordinators?

Let's look at a play from the 4th quarter of the Titans - Chargers game last year. 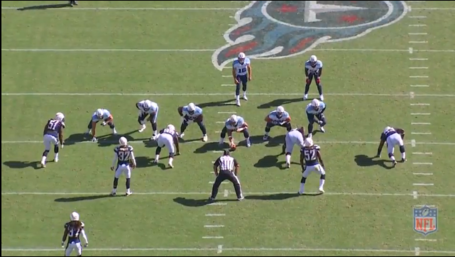 Pre-snap, the Titans show 11 personnel, shotgun. CJ is on Locker's left, so we can expect that side of the line to use BoB protection and the other side to slide block, conventionally. 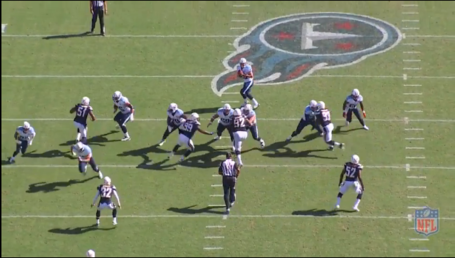 Just after the snap, the TE has released down the field, leaving 5 OL and CJ to protect. Stewart, Warmack, and Schwenke all appear to be slide blocking. Warmack and Stewart have taken a step to the outside, and have not engaged anyone. The DT lined up over Warmack released inside, so Warmack is letting him go because he is responsible for the outside gap. Schwenke is helping Levtre on the block, but he is keeping his right arm free to engage that gap.

Levitre and Roos, on the other hand, have immediately engaged and started blocking the defenders lined up on them. This is clearly BoB blocking.

CJ is checking 52, sees that he is not blitzing, and has released into his checkdown. 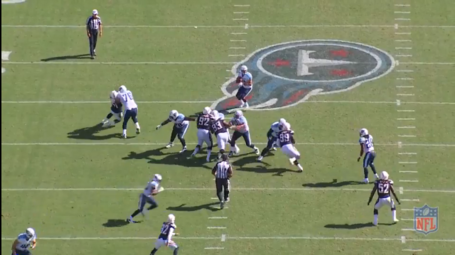 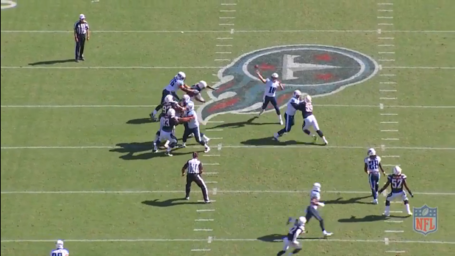 All in all, a well blocked play and a clean pocket for Jake to throw down the field.