A look at schematic success within Horton's system at Inside Linebacker, and how current players on this roster fit into Horton's madness.

In our continuing series on Ray Horton, we'll take a deeper look into how our current stable of inside linebackers may fit into Ray Horton's pressure packages.  Thusfar, we've seen pressure from the ILB in Fire Zone, with additional corner pressure, and with delayed pressure.

When asked by TitansOnline about his preference for the 3-4, Horton had this to say:

It’s simple, a number of things. It gives you more athletes that can play in space. It should help your special teams because you have more athletes that can play in space, and it also helps where, in the simplest terms, if you have four down, the offense basically knows, 1, 2, 3, 4 are rushing every time, basically. Well, in the 3-4 they have to account for, they know three guys are going to rush, the three big guys but now, who is the fourth rusher? They know in theory four guys are coming every play, but which one of the four is the next guy? Is it going to be the left guy? Is it going to be the middle guy, the other middle guy, the right guy? … It makes their blocking schemes, you’ve got to account for the three plus one, but it can be any of them so it just adds a dimension. It’s not like it’s revolutionary and they can’t do it, it just adds a dimension of, ‘Make sure you’re sound. You better be sound in your protection because if you’re not, this guy is coming.’ It just adds an element of mystery, I guess, to the layman sitting out there listening.

So, let's start with a picture. 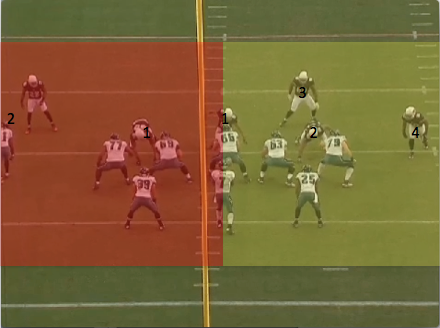 Today, we're going to review a Cardinals blitz from 2012 out of a 2-4-5 look.  Before we get into that, let's reconcile the things Horton is saying above with what's happening on the field.

I've divided the field into halves in order to understand whether each side has every potential rusher accounted for.  In terms of basic protection, Big on Big is a traditional way of handling things.  It operates just like it sounds.  The big linemen take on the big tackles and ends.  In general, these are 4 rushers that identify themselves presnap by getting into a three point stance to rush.

Now, when you're watching football on Sundays and you hear the QB call out "51 is the Mike", what he's generally doing is identifying the 5th pass rusher.  So, if that guy comes with pressure, the offensive line must protect him.  In the play above, Paris Lenon is the Mike and he's picked up by the Center.  It's worth noting that the "Mike" doesn't necessarily have to be the middle linebacker.

And, finally, what happens if additional rushers come?  Well, there are a variety of ways to handle it.  You can "throw hot" which is basically a quick throw that helps account for an unblocked rusher.  Or, in 6 man (5 linemen plus a tight end or RB), or 7 man protection, you can pick up the additional rushers with the running back in pass protection.  Many times, the RB will execute what's called a check release, where he'll check for incoming rushers, and, if none come, will leak out into a pass route.

So, sticking with the example above, everyone's accounted for, right?  Two rushers on the left side of the screen (LT, LG), and two pass protectors.  4 rushers on the right side and four pass protectors (C, RG, RT, RB).  Well, yes, but this is where a great coordinator that understands personnel, and attacking schemes can give the upper hand. 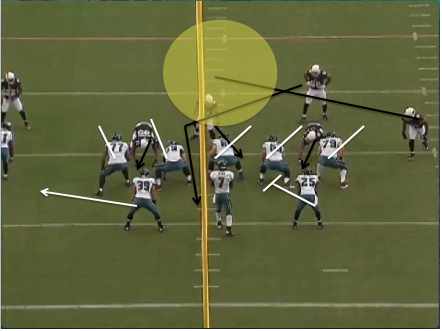 Here's how the Cardinals bring pressure.  Both outside linebackers get into coverage.  The it looks like Schofield checks McCoy for the run, and route, and then gets into zone.  Acho never comes with pressure, he's in coverage the whole way.  Though, note the reaction of the left tackle who's looking for Acho or the corner as a rusher.

The beauty of this play is that it brings fundamentally sound pressure that can still defend against the run, yet still manages to get home.  The LG is forced to block the Dockett.  Center is forced to block Lenon.  And, the RG blocks Campbell.  As Horton notes in his statement above, "who is their 4th rusher"?  Well, that comes from Washington who attacks the seam created between the Center and Guard.  Horton attacks the scheme, and forces the Eagles to account for the stunting inside linebackers.

Shady McCoy gets across the formation, and identifies the rusher, but he's too late.  Daryl Washington is too quick to the point of attack, and Shady can't recover.  It's not that the player wasn't accounted for.  But, sometimes when players are put into situations to highlight their skillset, they end up making plays.  The result here is a sack, and a nice segue into how the Titans players fit into this type of pressure.

Ray Horton has proved to be adaptive in his two different spots as DC.  While Horton did bring interior pressure Cleveland, it clearly wasn't the focal point that it was in Arizona.  In everything I've seen and read, Horton doesn't strike me as a guy hung up in dogma.  He's going to adapt to personnel.  In my opinion, our personnel strengths in Tennessee more closely mirror those in Arizona from the perspective of the front seven.  Specifically, strength in a dominant 3 tech, and a solid, even if imperfect, inside linebacker.

In Arizona, one of Horton's preferred weapons was Daryl Washington for reasons we can see in the play above.  A somewhat undersized inside linebacker that, at least according to his scouting report, struggled at times in tight quarters, yet flashed special speed for a linebacker.  Sound familiar?  Based on their combine numbers, Brown, Woodyard, and Washington all compare similarly.

Hard to draw much conclusion regarding Washington before Horton arrived, as it was only his rookie year.  But, there's no denying that Washington exploded in Horton's defense.  His tackles jumped from 64 to 94 to 108.  Sacks from 1 to 5 to 9.  And, then, poof, as the scheme left, so did his production, even if we account for the 4 games missed for suspension - 59 tackles and 3 sacks is not the same kind of productivity he experienced in the two preceding years.

In looking at Zach Brown and Wesley Woodyard, it's hard not to get excited given Washington's history.  Despite ups and downs by both Brown and Woodyard, there's no doubt that both have proved productive in the past.  My exposure to Woodyard is far limited compared to that of Brown's, so I can't totally speak to how he'll fit.  But, I'm brimming with excitement for how Brown fits in this scheme considering how he's flashed in the past.

I mean, certainly Horton can find a way to work with this, right?