Breaking Down Ken Whisenhunt's Rushing Offense: Running from the Shotgun

How does Ken Whisenhunt utilize the shotgun in his rushing attack?

Share All sharing options for: Breaking Down Ken Whisenhunt's Rushing Offense: Running from the Shotgun

In the last iteration of this article, we discussed the fact that Whisenhunt utilizes both zone and gap running concepts in his offense. In this article, we'll look at whether or not Whisenhunt prefers to run the football from under center or from the shotgun.

Conventional wisdom says that the shotgun is for passing. The QB doesn't have to drop back, simplifying mechanics, and he's moved away from the pass rush. Unless the pistol is utilized, running backs are offset to one side of the QB, changing mesh points between he and the QB and limiting the variety of running plays that can be called. Running plays should come from under center. The running back gets a nice head start, he can run to either side of the line of scrimmage with equal ease, and the whole rushing playbook is open to be called. But as always in football, going against conventional wisdom and doing something unexpected can pay off.

To collect a small sample size, I looked at every run from the first 2 weeks of the 2013 San Diego Chargers offense and recorded whether the play was run from under center or from the gun.

I tallied 48 total rushing plays. Among those 48 plays, 21 runs came from shotgun, and 27 came from under center. That's a whopping 44% of run plays from the gun, over the admittedly small sample size of 1/8 of the regular season.

As discussed above, there can be some advantages to running out of the shotgun, if you're implying that you want to pass and spreading the field. One of the most common runs from the shotgun is the age old draw play. With a draw play, you show pass, then hand the ball to your running back, typically up the middle, to try to catch the defense off guard. 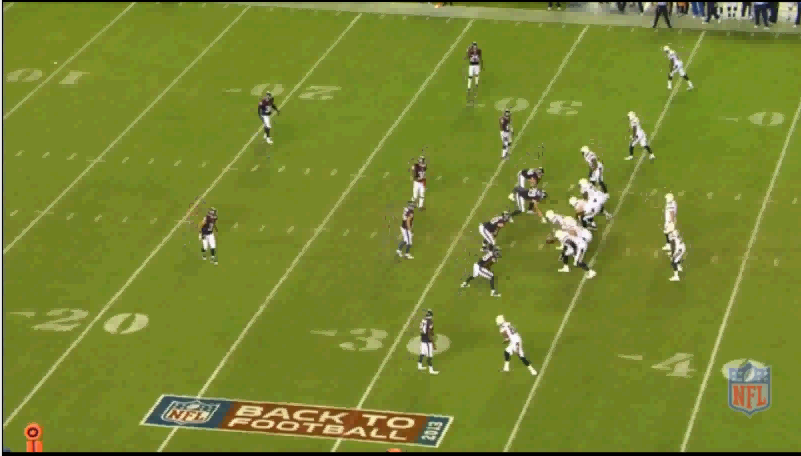 The Chargers break the huddle in 11 personnel with Rivers in Shotgun, Ronnie Brown to his left, and the TE standing up and split away from the offensive line.

Now a view from the box. 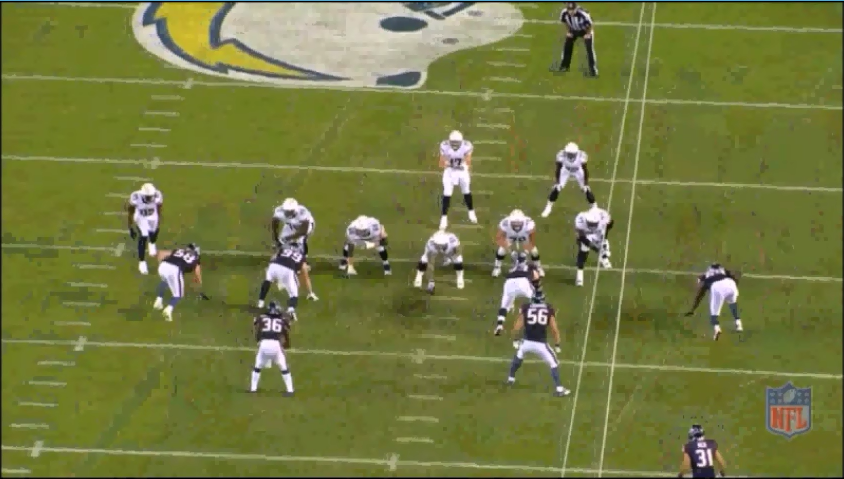 With the Chargers in 2nd and long, and a formation that is somewhere between 3 WRs and 4 WRs, if you consider the TE to be a WR on this play, the Texans show 6 men in the box.

More interesting is the alignment of the defensive line. The Texans are lined up with a two wide 5 techniques and two 3 techniques. Note, I've used "wide 5" because they are lined up wider than a conventional 5 technique in more like a 7 or 9, but since the tackle is the end man on the line of scrimmage, and I consider a 5 tech to be his outside shoulder, I'll call it a "wide 5." But that's not the important alignment. The important alignment is the two 3 technique tackles, putting them both in the B gaps. That leaves Brian Cushing and rookie safety D.J. Swearinger to defend the two A gaps. If the TE can provide a block, the Chargers have a blocker for each box defender, and should have the advantage. 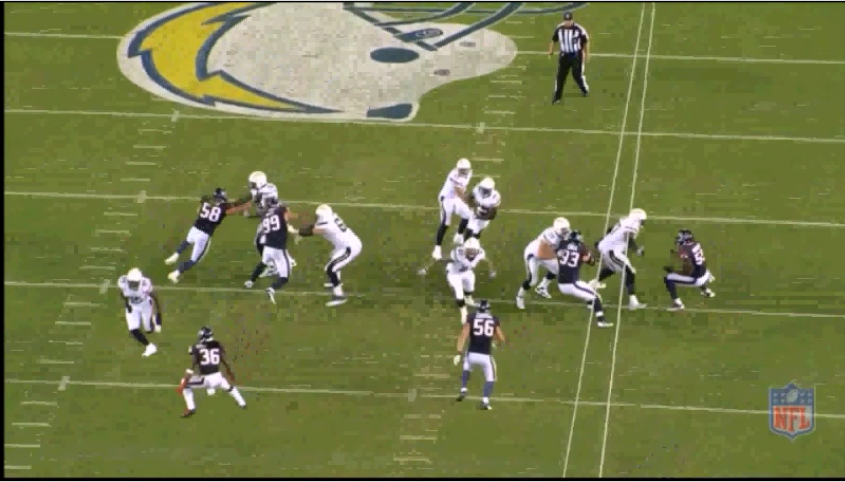 The ball is snapped, and the offense is sending mixed signals. The offensive line is showing pass, and the TE is releasing down the field, but the QB is showing a handoff to Ronnie Brown, either actually handing him the ball or performing a play action. It's worth pointing out here that in a traditional draw, the QB would obviously show pass before handing off--here he goes straight to the hand off. But the offensive line and the TE show draw action by pass setting and releasing downfield, respectively.

The offensive line showing pass does it's job. They get all 4 pass rushers up the field and out of the way, completely clearing out the middle of the field. The TE releasing down the field has grabbed Swearinger's attention, and he is also abandoning the middle of the field. Cushing is left to defend both A gaps, but he is not headed downhill, and the C is on his way to block him, and if Brown can follow his block and get past Cushing, the Chargers are in line for a big play. 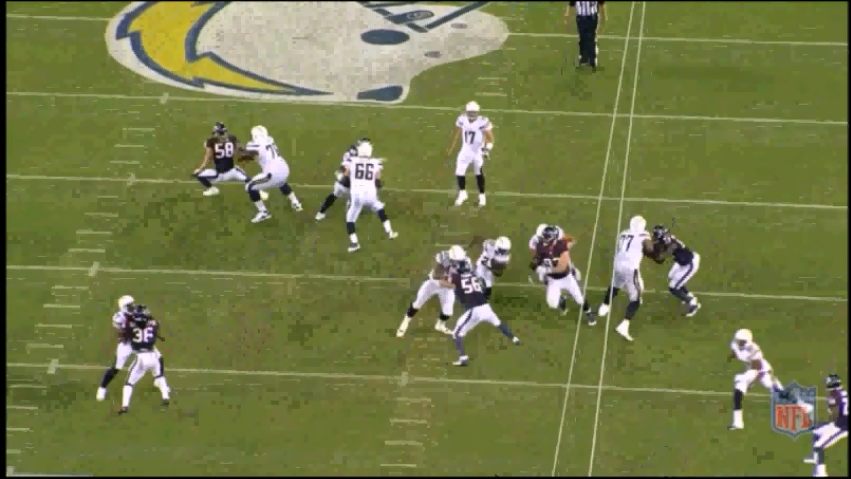 In this still, the TE has converted his release into an effective block on Swearinger. The C has successfully blocked Cushing, but instead of following the green grass, Brown is running himself into the retreating defensive line. 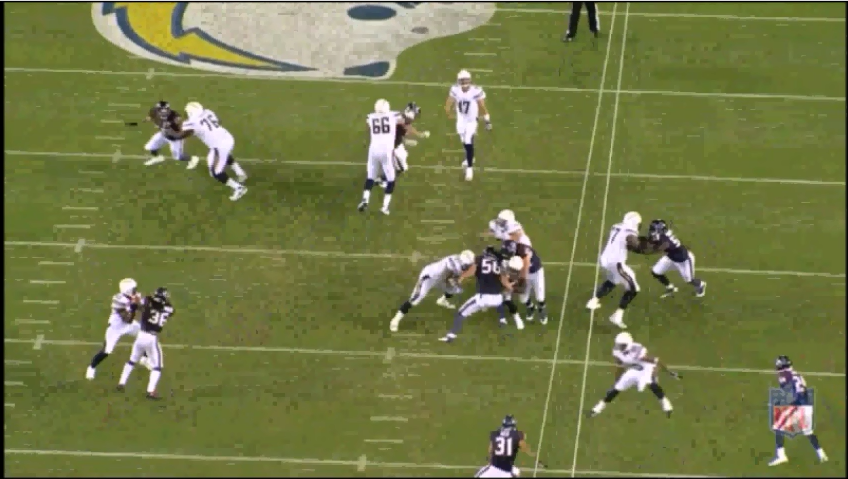 Brown made a poor decision with the football, but thanks to defensive alignment, he was still able to pick up 5 yards. However, if he had bounced it to his right instead of his left, he might have gotten into the secondary for a big gain.

There are a few things to take away from this article. We can expect to see a good mix of running from both under center and from the shotgun. Running from the shotgun can offer some key schematic advantages, as seen in the above draw-style play. By implying pass, the offense was able to catch the defense in an alignment that put them at a disadvantage and they picked up good yards despite non ideal execution.