This week we'll look at a common staple of the Ray Horton defense - the Fire Zone.

Share All sharing options for: Ray Horton Blitz of the Week: Fire Zone

Personnel:  Bears are in 21 Personnel.  Browns are in their Base 3-4 Package.

Above is a play from the Dick Lebeau's 2002 playbook.  This is one of their fire zone looks.  The concept is the same as the play we'll review, though the groupings of players are slightly different due to formational differences.  One of the great things about this rush is the balance it provides.  If the opponent decides to run the ball, you're still fundamentally sound. 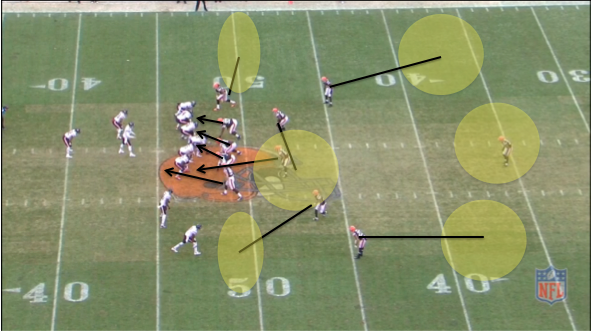 Up front, the SDE (top of page) will attack the strongside tackle and B Gap.  Both other interior rushers slant one gap strongside (from weakside A to strongside A, and weakside B to strongside B).  The backside linebacker attacks the C gap.

Behind this, the WILB is going to bring pressure into the B gap that's vacated by the weakside takle.  The SILB  will play the 3RH (3 receiver hook) zone.  Many times this will have him filling where the blitzer is vacating.  While this doesn't happen in this play, it's worth noting that this potentially will bait a defender into throwing hot into his zone.

Here's the All-22 view.  You'll note that this is a clear case of schematic pressure.  The slant of the weakside end takes the RG with him, allowing the rusher to come free.  The QB outlets to the flat, which should be an easy play for a loss as the corner is driving on the player right as he receives the pass.  Unfortunately, as the saying goes, sometimes it's not X's and O's, it's Jimmys and Joes.

Here's another look from the end zone.  The way this play is drawn up is a thing of beauty.  The execution of the tackle isn't.  While this play itself is a good one to review from a schematic standpoint, I think it also helps illustrate an important point.  You can have great coaches, but, at the end of the day, all they can do is put players in a position to perform at their best.  From there, it's on the players to step up.

Come back next week to MCM.  We'll dig some more, and hopefully learn a little more about our new coordinator.