The MCM Community mock draft rolls on with the Denver Broncos pick.

With the 31st pick in the 2014 MCM Mock Draft, the Denver Broncos, represented by C-Pain, select.... 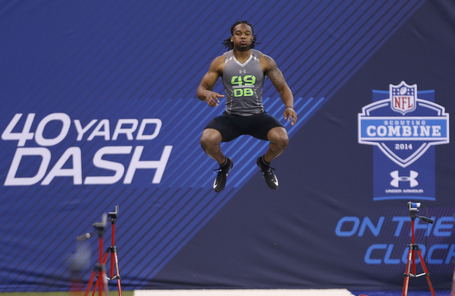 Extremely disappointed that Shazier was taken one pick ahead of them, the Broncos decide to focus on another area of need on their defense. At this point Roby presents the best value at a position of need and the Broncos should be really glad to have him (although they would much rather have Shazier). Despite the offseason signing of Talib and the likes of Chris Haris and Kayvon Webster already on the roster, Roby adds to what is a very solid unit. Elway has shared his belief that a team can never have enough talented corners on its roster and Roby provides insurance in case of an injury (Talib has a history of not playing full seasons). Also, this allows Harris to move back to nickel corner where he has thrived in the past. Roby is a quick cover corner who will benefit from practicing against the Denver receivers and should fill in nicely for the departed Champ Bailey. The Broncos made it one of their priorities in the offseason to sure up their secondary and they have done so now with the addition of Rby, Talib and T.J. Ward. The Broncos could also look at a linebacker like Chris Borland, an offensive lineman such as Xavier Su’a-Filo, or even a defensive lineman such as Ra’Shede Hageman with this pick as well.

The New England Patriots are now on the clock.