The MCM Community mock draft rolls on with the New England Patriots pick.

With the 29th pick in the 2014 MCM Mock Draft, the New England Patriots, represented by SouthTexasTitan, select.... 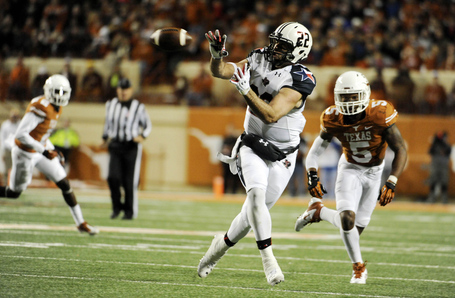 I could see the Pats trading back early into the second round and making the same pick but, we don't make trades in this draft. Mock drafts have the Pats going DL here, while I don't disagree with the choice I see the Patriots getting another weapon for the Golden Boy. The WR core is pretty crowde, Dobson, Jules(Edelman), Danny Amendola, recently acquired Brandon LaFell and not to mention Josh Boyce and Kenbrell fighting for the fifth spot. Given another year of rapport with Brady I think the WR group could be really good. TE on the other hand has been lacking some punch, with Hernandez being signed to a long term deal with Bristol County House of Corrections, Gronk's nagging injuries (most recent being that ACL MCL tear), and Hooman being primary a blocker, Brady could use another huge red zone target. Bring in Jace Amaro, while he was used a lot as an inside receiver with the Red Raider offense he racked up 106 catches for 1,352 yards and 7 touchdowns in 13 games. He has excellent size, shows good hands, combine that with a nasty streak and you have an over sized receiver who drags tacklers wherever he goes. He also brings utility to an offense that runs a lot of two tight end sets, flashes good blocking in the open field using his huge frame to his advantage and has a quick step to stretch the seam. If Gronk can stay healthy, he and Amaro could be a scary TE tandem for that offense.

The San Francisco 49ers, represented by muddykluc, are now on the clock.