In this series of articles, I plan to breakdown one running play per article from the 2013 Chargers offense, which was coordinated by Ken Whisenhunt.

As much as I would like to dive into the basics of running offenses in the NFL, I'm afraid there's just no room for it here, and I am under-qualified for such articles. However, almost any running play can be boiled down to one of two styles of play: zone running plays and gap running plays. Very broadly, in a zone running play, the offensive linemen "takes what the defense gives them" in a sense, and the running back has to make a read and find the proper hole to run through. In a gap blocking scheme, the offensive lineman and other blockers block in a way that opens up a specific hole, and the running back is instructed to run through the assigned "gap." I suggest catching up on Matt Bowen's articles on the topic to get a thorough introduction:

I started watching Whisenhunt's offense expecting to pick up a trend. Surely he prefers gap plays to zone, or vice versa. Maybe he likes running with a fullback. Or maybe he always puts his QB under center to run. In my (short) search so far, I've found no concrete trends. Whisenhunt will likely run a varied style that includes a numerous formations, personnel groups, and will incorporate both gap and zone concepts. But that leaves a large pool of plays to draw from. In this article, I'll diagram one of my favorite concepts I've seen from him.

The first image is an all-22 view of the field just before the players are set into formation. 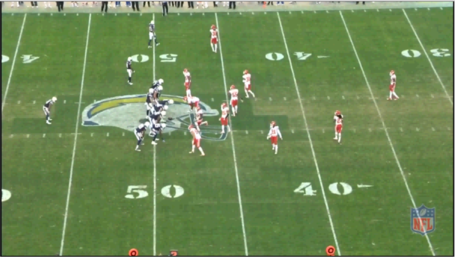 The Chargers come out in 12 personnel (1 back, 2 TEs, 2 WRs). Both WRs line up at the top of the screen, to the weak side of the offense, and both TEs line up to the right side of the formation, with the QB under center and the running back behind him.

The Chiefs show a 2-4-5 nickel defense with a single high safety, and one corner shadowing the 2nd TE to become the 7th man in the box.

After getting set in this formation, Phillip Rivers puts the 2nd TE in motion to the left side of the line, balancing the formation, as seen below. 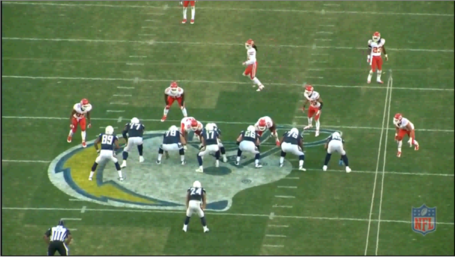 This from-behind view of the box provides more details on the defense. The box players are showing a 2-4 formation with the 2 OLB walked up onto the line of scrimmage. Note that the cornerback tailing #89 is also in the box and is still running across the formation in this still, and the strong safety has walked up closer to the LOS to help in run support and potentially to provide man coverage of the right TE.

With this, the offense and defense are essentially set, so let's look at the play diagram. 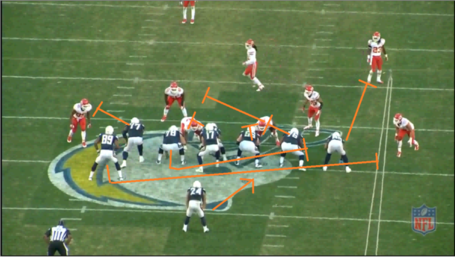 If you did your homework and read Matt Bowen's article on the Power O, then you'd immediately recognize this play as a variant on the standard Power O. The basic premise of the Power is that the playside linemen block down (towards the backside), the backside guard pulls and leads through the hole, and the full back (or backside TE, in this case) kicks out the end man on the line of scrimmage. Working right to left in the play above, the TE will release inside the outside linebacker, leave him untouched, and move downfield to block the run support safety. The right tackle and right guard will double team the 3 technique DT (this double team is staple in many teams' Power O), and the RT will release him to the guard to pick up the flowing backside ILB. The C blocks down on the backside 1 tech DT. The backside guard pulls with intention of leading through the hole, and will most likely be responsible for the playside ILB. The LT will cut off the backside DE and ensure that he can't make it into the backfield and break up what can be a slow developing play. The backside TE will pull all the way across the formation and kick out the end man on the line of scrimmage. Often, a fullback will perform this block and will have a much shorter distance to travel. 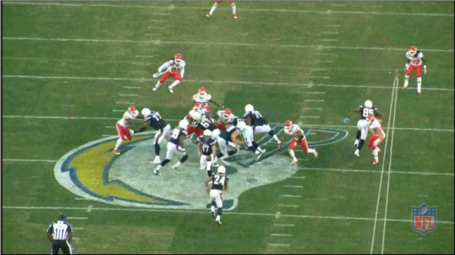 Moments after the snap, there are a a few points of interest in the defense. That strong side inside linebacker that the backside guard is supposed to be blocking is coming on a hard blitz, and looks like he's in prime position to blow this play up. But my favorite part of the play is the nickel corner who was supposed to be covering that 2nd TE. The nickel corner (top left of the screen) still had his back turned to the play side when the ball was snapped, and had to slam on the brakes and try to turn around. He recovers very well, but he nearly removed himself from the play without being blocked, all by starting the TE on the right and motioning him to the left instead of coming out balanced. 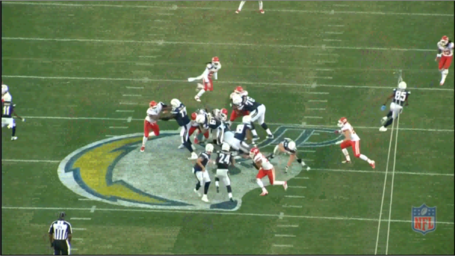 The backside guard tried desperately to turn his lead block into a kick out of the blitzing linebacker, but he barely gets a hand on him, and the ILB has the RB dead to rights. 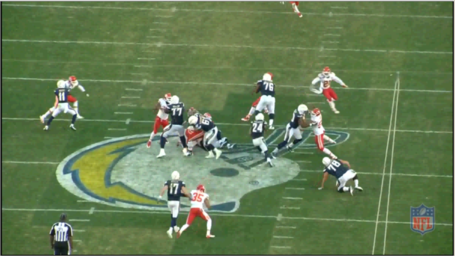 Somehow the running back escapes the pressure in the backfield, and now the play is set up beautifully. The C and LT complete their blocks. The RG and RT dominated their double team, and the RT did an excellent job of working to the 2nd level to pickup the backside ILB flowing over to make the play. That nickel corner who had his back turned to the play at the snap has somehow managed to recover well enough to overpursue and run himself out of the play to the other side of the field. And the linchpin, the backside TE performs an excellent kickout block on the strong side OLB. 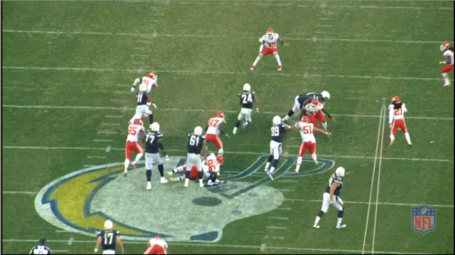 The running back bounces to the left, and he's into the secondary and off to the races.

And now in gif form (click the gif and load it in a new tab if it's not working for you here).

Though it wasn't perfectly blocked, there are a few things to like about this play. At its core, it's a basic Power O running play. But taking advantage of a motion to move the defense around, and being somewhat creative in bringing your kick out block from the backside TE introduces some variety into an otherwise basic play. Credit to the KC defense, as well, because despite not making the play, blitzing the inside linebacker was a fantastic play call to shut down the Power O as it was ran here. The offensive coordinator might prefer to see his playside TE be responsible for down blocking that LB in the future.

In terms of how this type of running scheme could fit the Titans, Delanie Walker is versatile enough to be used in motion and as a blocker across the formation in 2 TE sets, and Andy Levitre will excel in power style plays where he's asked to pull. Bishop Sankey also made a name for himself as a gap style runner in college, and should get plenty of opportunities to shine in this type of play.