Pantheon of Titans: The Story Of Blaine Bishop

Share All sharing options for: Pantheon of Titans: The Story Of Blaine Bishop

Our Titans Anthology rolls on with one of the game's hardest hitting safeties of all time; a player who struck fear into the hearts of receivers everywhere, and whose exploits helped anchor the best defenses the Tennessee Titans have ever put on the field. Beyond this, his loyalty to the organization that drafted him remains strong to this day, and his example gives hope to all those who play the game of football, that's it's not the measurables that define a player, but the heart.

"What lights the fire under me is to prove people wrong."

From the beginning, he was limited. His underwhelming size at 5-9, 200 lbs made NFL franchises wary to select him, but it was Bishop himself who would have the last laugh. Growing up in Indiana, Bishop played his ball at Cathedral High School in Indianapolis, where he was seen as an exceptional athlete. He played college football at St. Joseph's College before transferring to Ball State. Even early on Bishop stood out as a hard-hitter, but this alone was not enough to change his status in the eyes of NFL draft scouts.

His lack of size allowed Bishop to plummet all the way to the 8th round (back when there was one of those), before landing at 214th overall with the Houston Oilers.

Like always, this only drove Bishop to greater heights. Blaine was an immediate fit in the Oilers hard-nosed defense, and even before his rookie season officially began, it was clear that Bishop had the mindset to succeed, with a relentless attitude at practice that translated well on game day.

"At times, Blaine did walk around with a chip on his shoulder, but that was just how Blaine operates during the week...He meant business when he stepped on the field and always wanted to win the game."

From day one, the hard-hitting safety's emotion-driven play was a hit with fans and coaches alike. The Oilers had struck gold in the 8th. Despite having the odds stacked against him, both physically and from his ultimate drafting spot, Bishop proceeded to break the barriers of all expectations. 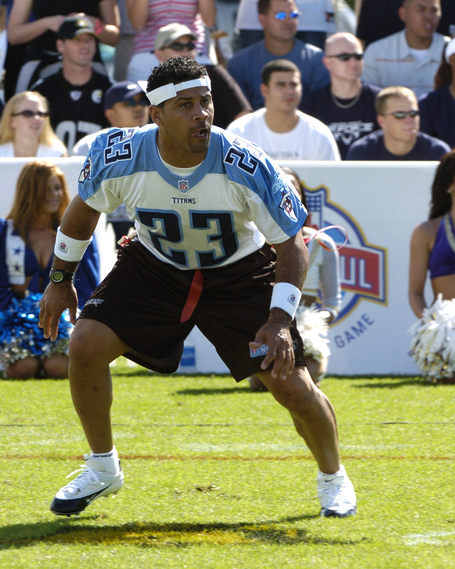 By the time the Oilers packed up shop for Tennessee, Bishop was an anchor on the defensive side of the ball; a ball-hawk who would not be denied. Renowned league over for his fearless attitude and bone-crunching hits, he was dubbed "The Hitman" by both the hometown crowd as well as all those who saw him play, or suffered one his tackles. Indeed his borderline reckless playing style earned his plaudits wherever he went.

He also helped instill an attitude of emotion, and preparedness on the Tennessee squad, becoming as much a leader as any in a locker room filled with strong figures. Beyond Steve McNair, Frank Wycheck, Eddie George, and Lorenzo Neal, Bishop stood out as an emotional figurehead, and one who's impact was felt both by his teammates and by the fans of the town's new team.

"I think with me there is (a part of Blaine instilled in me), because I learned from him why it takes emotions to play this game, and that you've got to prepare."

The newly dubbed Tennessee Titans rode Bishop and his accompanying defense to new heights, becoming the gold standard of NFL defense. The eighth round pick earned four pro bowls in his 9 years with the Titans, helping the team win their first AFC Championship Game and advance to the Super Bowl.

"I was captain of the defense, but I wanted to win. I was competitive. If I said something you didn't like, you could let me know. But at the end of the day, I'm doing what's best for the team." 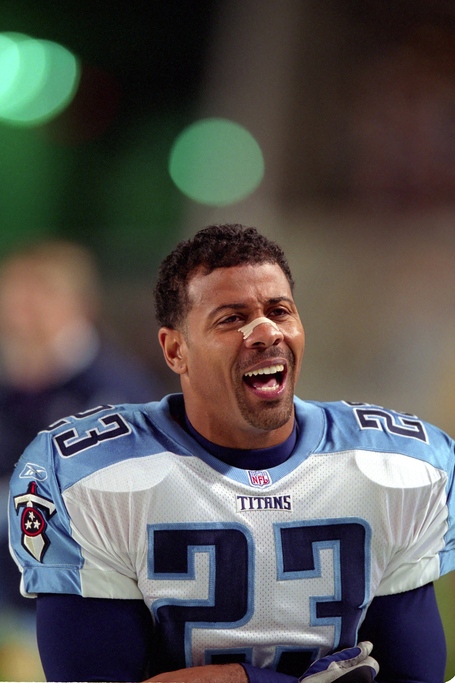 "The Super Bowl season is the year we beat Jacksonville three times, and that was really hard to do. They had a talented team. I can remember (coach Fisher) saying if we just stayed physical with them until the end of the (AFC Championship) game, that at some point, they would cave in. We believed in that, and that's what happened."

The Titans advanced to Super Bowl XXIV on the heels of a dynamic offense ran by Steve McNair and Eddie George, and physically grinding defense fueled by the likes of Jevon Kearse and Blaine Bishop. In true fashion, the Titans defense played in a slug-fest against the Rams under the Georgia Dome lights, with Bishop himself playing a major part in defensing one of the most prolific passing attacks of all time in Kurt Warner's St. Louis Rams.

Despite the disappointing end result, the Titans came home heroes to Nashville, firmly entrenched in their new city. Bishop played as big a part in that process as anyone.

"You don't replace a guy whose been here nine years and has been to Pro Bowls and has been a leader and impact player overnight. We will in time. We have no choice."

After 10 years in the NFL Bishop called it quits, but his love for the game remained as strong as ever. Bishop went straight into sportscasting with a focus on the Tennessee Titans, and now hosts his "Three Hour Lunch" or 3HL radio show on WGFX 104.5 "the zone", bringing fans hard-hitting Titans news through an entirely different medium.

In the end, Bishop's legacy stands as one of perseverance and pride. Bishop never allowed his stature to stand in the way of his dreams, nor his performance, and remained a model of excellence throughout his ultimately successful NFL career, with four Pro Bowls and three All-Pro selections to his credit, and the distinction of being the Titans all-time best safety, and a premier defender during his entire NFL tenure.

He represents everything that a professional athlete should aspire to be; an emotionally driven leader, both on and off the field, a figure that has shown time and time again his ability to overcome the odds, and an icon that captures everything there is to love about Tennessee football.