The MCM Community mock draft rolls on with the New Orleans Saints pick.

With the 27th pick in the 2014 MCM Mock Draft, the New Orleans Saints, represented by O-Line Titans, select.... 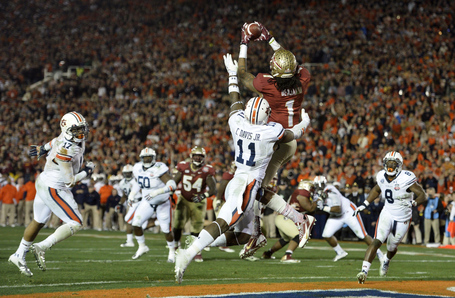 Originally, I was going to draft defense with either Dee Ford or Demarcus Lawrence, but I think Rob Ryan will find some new projects in later rounds. The New Orleans Saints have been a perennial offensive power for some years now. Led by Drew Brees they have put up some gaudy numbers in years past, but this is an aging team whose title window is closing each day Brees (35) gets out of bed. They lost Lance Moore in free agency and apart from Colston feature a WR corps of Kenny Stills, Nick Toon, and Josh Morgan. Who dat? Exactly. They were ranked 12th in the NFL for redzone TD percentage in 2013 (down from 2nd in 2012), and I believe they need to target a big-body to sway attention from Jimmy Graham when they enter the promise land.

Enter Kelvin Benjamin. At 6’5, 243 lbs. Kelvin Benjamin is big. Real BIG. The knocks against him are his tendency for dropped passes and his lack of savvy in route running. These are correctable, especially with Brees and Sean Payton at the helm. He has the size and speed (4.61) to garner 1st round consideration. Let’s just hope he resembles Plaxico Burress and not Mike Williams (DET) on the football field. Plus the Panthers are next up and targeting WRs so why not stick it to your division rival 2x a year for at least the next five seasons?

The Carolina Panthers, represented by nashvilleman, are now on the clock.