This will hopefully be part of a recurring, weekly Offseason feature that highlights the variety of pressure schemes Ray Horton will bring to the Tennessee Titans.

Share All sharing options for: Ray Horton Blitz of the Week: Delayed Pressure

Personnel:  Chiefs are in 11 Personnel.  Browns are in their 2-3-6 Dime Package. 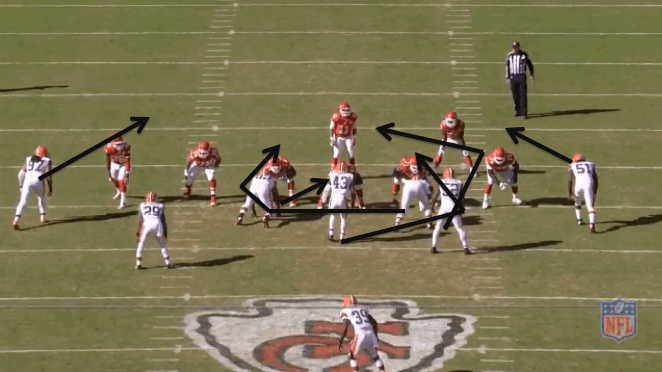 Browns run a single high, man under shell behind the front 7.  A common theme among aggressive, successful defensive coordinators is attacking protection schemes.   How do can you bind an offensive line?

Look at the right side of the line.  If we include our SS and their center, you're looking at a 4 on 4 matchup (Charles picks up the free rusher).  All protection schemes are going to, at a minimum, keep this balance (obviously), and if they can't then there's an immediate "hot" throw for the the QB to exploit the blitz.  In a straight up, downhill blitz, basically this protection scheme would easily allow the center to matchup on the SS, the guard on the tackle, Charles on the Mike, and the LT on the Elephant rusher.  Horton takes a different approach.

The first key in this blitz is the stunt up front.  Desmond Bryant crashes down into the center, driving into the A gap.  Armonty Bryant stunts behind him into the weakside B gap.  On it's own, this stunt creates a pressure opportunity.  It also sets the table for the real pressure.

The LG is in a pickle.  He can't allow A gap pressure, but he's also responsible for the weakside B gap.  The stunt takes place, and the blitz comes behind it.  Jackson comes with the first wave of pressure, which occupies the back.  Now, if the protection was passed off soundly, the LG might be able to recover and get to TJ Ward (SS) who's coming on a delayed overload blitz behind the Mike linebacker.  He doesn't, though.  Ward gets through untouched and gets the sack.

It is cliche, but it really is a thing of beauty when these blitzes come together as designed.  In studying tape of Horton, it's clear that, especially as it relates to pressure packages, he's one of the best in the NFL.  We'll look to understand this better as the offseason labors on.