The MCM Community mock draft rolls on with the Cleveland Browns 2nd pick.

With the 26th pick in the 2014 MCM Mock Draft, the Cleveland Browns, represented by danomite, select.... 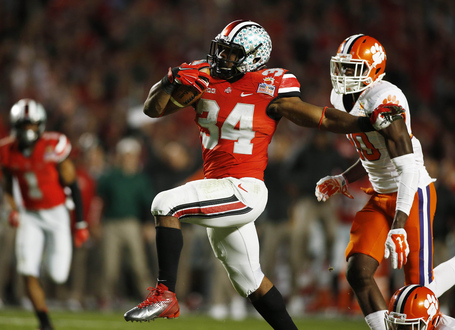 Mail in job from Dan:

I'm not going to pretend I know what the Browns are going to do this late in the draft.

In fact, I had completely forgotten Cleveland had more than one pick. (I wouldn't have chosen them had I actually known.)

So here we are---pressed against "the Jommy deadline"....all I really want to do is take a nap after a busy holiday weekend and a visit by Doc Brown (Christopher Lloyd) at work today. However, duty calls.

I have the Browns taking Hyde for one reason---(well, two.) I'm lazy...and the fact that they paired Brandon Weeden and Trent Richardson together a few years ago during the draft.

Cleveland has an unorthodox way of doing things, and I believe they'll want to pair their new QB with some fresh legs.

I understand they just signed Ben Tate etc, etc, etc, etc, it's a massive reach. I don't care. They're taking Hyde in this mock draft.

P..S. I wouldn't read this either. *returns to the shadows*

The New Orleans Saints, represented by O-Line Titans, are now on the clock.