The MCM Community mock draft rolls on with the Cincinnati Bengals pick.

With the 24th pick in the 2014 MCM Mock Draft, the Cincinnati Bengals, represented by Black Helicopterz, select.... 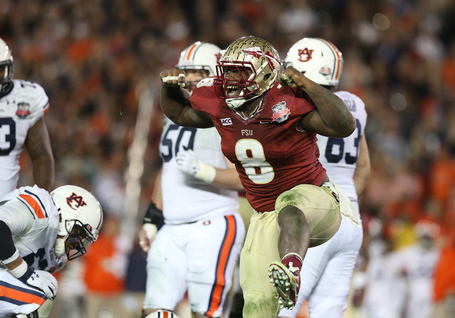 The Cincinnati Bengals will pick the playmaking DT, Timmy Jernigan.

Jernigan IS A BEAST!! He brings more depth, more size and more strength to an already talented Bengals defense.

The Bengals are a pretty decent team heading into the 2014 season. There is not a sense of panic and none of the coaches are on the hot seat yet so they have the luxury to pick the best player available. The new DC and staff will need to make sure that Jernigan stays in the weight room to add more muscle and flexibility because Jernigan eats Big Macs like he eats double teams but he will be just fine before the season starts.

Jernigan has been predicted to go between pick number 15 in the first round up until the last pick of the second round. There is no way that he makes it out of the first round.

The Stoolers, the Ratbirds and Low gain's Brownies won't have a chance this season.

The San Diego Chargers, represented by SoCalTitan, are now on the clock.