The MCM Community mock draft rolls on with the Kansas City Chiefs pick.

With the 23rd pick in the 2014 MCM Mock Draft, the Kansas City Chiefs, represented by JamesCarterTV, select.... 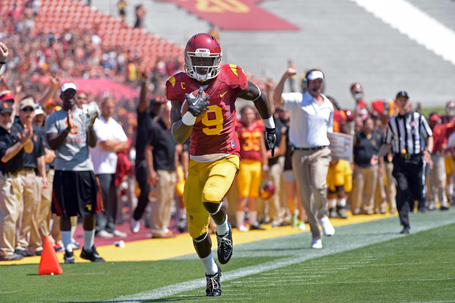 In this scenario, the Chiefs would love nothing more than to trade down and take a corner or a guard, but seeing as there are no trades in this mock draft, they have no choice but to take the best player available at their biggest position of need: wide receiver.

Despite finally having a viable quarterback under the helm, Dwayne Bowe’s productions last year was one of the worst of his seven year career, catching only 57 receptions for 673 yards. It’s clear that he can no longer be trusted as the long term option. Furthermore, the Chiefs’ leading receiver last year was Jamaal Charles with only 693 yards, so it’s safe to say the Chiefs would love to add another pass catcher. Enter Marqise Lee.

From day one, Marqise Lee would be the #2 option in Kansas City, surpassing the likes of Donnie Avery and AJ Jenkins. While his play reminds me of Pierre Garcon, his 6’0, 195 pound frame is very reminiscent of Jeremy Maclin, a receiver that Chiefs head coach Andy Reid drafted and was very fond of in Philadelphia and would love to replicate in Kansas City. Lee’s route running and run after catch abilities would make him a great fit in Reid’s offense and give the Chiefs a weapon they desperately need.

The Bengals, represented by Black Helicopterz, are now on the clock.