The MCM Community mock draft rolls on with the Arizona Cardinals pick.

With the 20th pick in the 2014 MCM Mock Draft, the Arizona Cardinals, represented by Shrapnel Leader, select.... 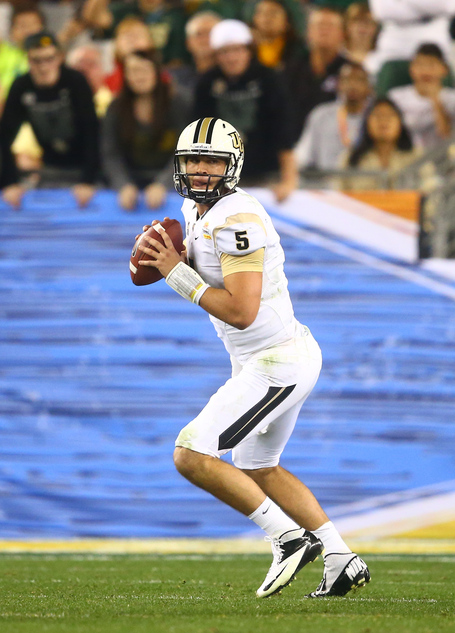 Here was the analysis from Shrapnel Leader:

To some, the selection of a quarterback, would seem like an odd choice for a team that was denied going to the playoffs despite winning 11 games in what is the toughest division in the NFL right now. This is, however, the most valuable pick for several reasons. First off, the Cardinals have few immediate needs right now. Safety is the only major priority and with both Clinton-Dix and Pryor off the board, the remaining value for the position does not justify a first round pick.

Instead, they will be using this draft for depth more than anything else, particularly at Defensive End, Inside/Outside Linebacker, and Corner. CJ Mosley would no doubt be an excellent addition to the team, but he’d be riding the bench more than anything, and while Bortles would be doing the same thing, this pick is necessary for several reasons.

Firstly, Carson Palmer is growing older and while he’s still got it (4,274 yards, 83.9 rating), he’s not as spry as he used to be. With an offensive line that is constantly plagued by injuries and sacks allowed (41), the Cardinals cannot afford to crash and burn without him if he goes down. They could attempt to draft another lineman (not a position of need), but with Matthews, Robinson, Lewan, and Martin all gone, it would be an unwise decision.

They are too close to the playoffs to take that risk. The Cardinals need to look to the future and bringing a quarterback many have considered Top-10 worthy is a perfect scenario for Arizona. At the rate they are going, they will not be drafting nearly that early next year, so why not bring in a successor who can learn the system under Palmer? Bruce Arians is known for having intricate offenses and steep learning curves, so sitting behind Palmer until called upon would actually be the best thing for both the team and Bortles in the short term and long term.

All in all, the Arizona Cardinals are a solidly balanced team right now and will continue to be so after the draft, but without a legitimate backup plan at Quarterback, they will not last long against their division rivals. With Bortles in the lineup, the team can take a sigh of relief knowing that their playoff hopes are not dependant on Drew Stanton or Ryan Lindley.

The Green Bay Packers, represented by abeck31, are now on the clock.