The MCM Community mock draft rolls on with the Pittsburgh Steelers pick.

With the 15th pick in the 2014 MCM Mock Draft, the Pittsburgh Steelers, represented by @TitansFanatic9, select... 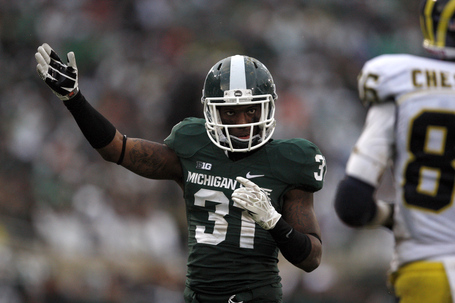 I am sure that @TF9 sent me a write-up, but I seem to have misplaced it. Stay tuned for that.

Pittsburg Steelers, known for their fierce defense led by Dick Lebeau. Now they are known for their players being as old as Lebeau. Getting some youth and speed in the secondary to match up with their vets will help their defense get back to the top. Darqueze Dennard fits Lebeau's defense perfectly with his physicality and aggressiveness. A corner that plays best in press-man coverage & comes up in the run game. Lebeau loves his corners that get dirty in the run game. Dennard has a knack for disrupting timing routes that can lead him into making plays in steelers aggressive, attacking defense. He will soon be Ike Taylor's replacement & possibly their star defender for years to come.