The MCM Community mock draft rolls on with the Dallas Cowboys pick.

With the 16th pick in the 2014 MCM Mock Draft, the Dallas Cowboys, represented by Sweet Tea Harvey, select.... 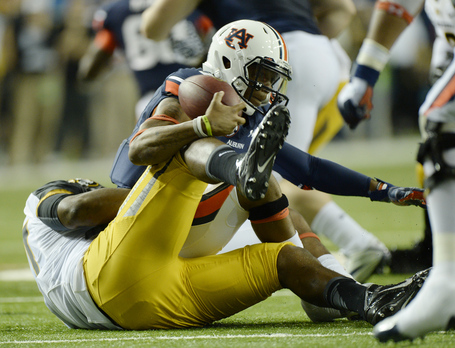 Here was STH's analysis of the pick:

Cowboys had to be salivating seeing OT Greg Robinson fall down the draft board further than originally expected, and if he had survived a few more picks, he’d be the no-brainer selection. Seeing Clinton-Dix and Pryor taken in the next picks didn’t really affect our Big Board much after that, however.

Living in South Texas, I’m in Cowboys country, so after discussing the team and needs with the Dallas fans around me, I was told that I can’t go wrong with drafting any sort of DL, OL, (or a new owner.)

Timmy Jernigan or Louis Nix were at the top of my board for a while, but after doing some thinking on the Cowboys, I have to think that losing DeMarcus Ware and Jason Hatcher in the same offseason leaves a HUGE gap for an effective pass rush, and so that’s what I think the #1 need for the Cowboys is. It came down to Kony Ealy and Dee Ford, and I think Ealy will be the better, more ready-to-start player with also the biggest upside.

CJ Mosley was also highly considered, but with Sean Lee still around, drafting an inside LB wasn’t as urgent a need as getting outside pass rush help. Ealy can play either DE or OLB, and that’ll be a big help.

The Baltimore Ravens, represented by Pratt, are now on the clock.