The MCM Community mock draft rolls on with the Chicago Bears pick.

With the 14th pick in the 2014 MCM Mock Draft, the Chicago Bears, represented by jerlindsey, select... 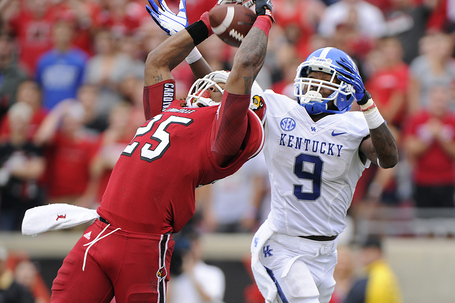 Originally I was going to look at some help on the DL, but Donald is gone, and, honestly, a viable DT can be found in later rounds (plus they spent the FA bringing in Houston, Allen, and Young on the line). Next, I’m looking for some help in the backfield, specifically at the Safety position. Clinton-Dix is gone, which is Ok, because, well, Calvin Pryor come on down! The Bears need Safety help in a bad way. It can’t be very pleasant playing in the same division as Aaron Rodgers, Calvin Johnson...and whoever plays for the Vikings not named Adrian Peterson. It would be great to have a solid, viable, and aggressive player like Pryor protecting the backend of the field. He would certainly be an upgrade to what they have going for them now.

Basically I chose Calvin Pryor because I wanted to...kind of like how I wanted the Bears.

The Pittsburgh Steelers, represented by @TitansFanatic9, are now on the clock.