The MCM Community mock draft rolls on with the Tennessee Titans pick.

With the 11th pick in the 2014 MCM Mock Draft, the Tennessee Titans, represented by TitansFirefighter, select... 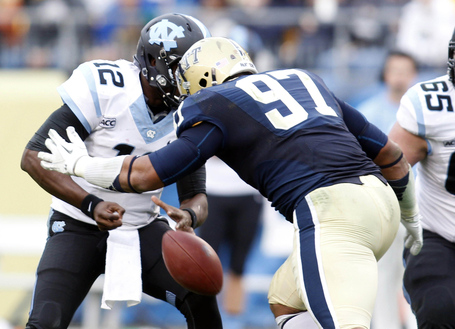 Here is TitansFirefighters analysis of the pick:

This draft has been a nightmare for the Titans. In the real draft I would expect the Titans to trade back and hope to gain a few picks. But because we can't trade back in this draft we just have to take the BPA which at this point is Aaron Donald. Now this pick does add another DT to the Titans which is already deep. We don't know what is going to happen with Casey when his contract is up, and we don't want to have a repeat of ATV this past season. But if you have an insurance policy like Donald then it goes a long way. Now with Horton taking over as DC, there has been talk about which 3-4 he is going to do. Yes by taking Donald we could run a 2-Gap 3-4 BUT it has already been stated that we will be running a 1-Gap 3-4. Like I said if the real draft up to this point turned out like this it would be a NIGHTMARE. Enjoy hearing what you have to say in the comments.

I have posted an approval poll for the pick. Be sure to vote.

The New York Giants, represented by theoriginal, are now on the clock....