The MCM Community mock draft rolls on with the Buffalo Bills pick.

With the 9th pick in the 2014 MCM Mock Draft, the Buffalo Bills, represented by TitansNDCClothing, select... 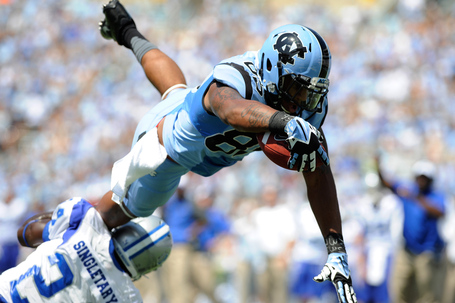 Prior to yesterday, in addition to Ebron, players like Khalil Mack, Anthony Barr, Greg Robinson and Jake Matthews were all available and were the top players who could address Buffalo’s significant positions of need. It was going to be interesting and difficult to choose one if any combination of those players remained. Yet, as you already know, only two of those players remained.

It would’ve been nice to pick a stellar pass rushing OLB for this pick (could you imagine a LB corps that consists of a top talent in the draft, Kiko Alonso, and Brandon Spikes?), but the value just wasn’t there after Barr and Mack went off the board. Greg Robinson would be a smart pick with a lot of upside. Even if he’s not super polished, my research into the Bills indicated many people identified OT as a top need and that any early draft pick could immediately come in and make them more efficient at rushing the football and simply effective in pass protection.

That said, most draft analysts seem to think that quality offensive tackles are extremely deep this year and, given that only Matthews is off the board up to this point, it’s not unreasonable to think the Bills would be able to get a quality, starting left tackle with the 41st pick, such as Cyrus Kouandijo, Morgan Moses, or JuWuan James. The strategy worked for the Bills in 2012 when they drafted their current LT, Cordy Glenn, with the 41st pick, and tackle is even deeper this year.

Ebron is the top-level TE talent and it’s not even close. The only other TEs who might go in the first round, according to many draft boards, are Austin Seferian-Jenkins and/or Jace Amaro. Ebron is the type of talent that could really help EJ Manuel in his second year make this offense hum. Assuming the Bills land a quality, starting tackle in this draft to help better protect Manuel, Ebron will create mismatches galore, burning by linebackers and safeties and rattling defensive backs as they attempt to bring him down. Ebron is not without his faults. Draft analysts seem to think his route running and hands need polishing, yet this is something coaches can work on with him, and these issues are nothing to keep him from starting and making an impact on day one.

For those of you who disagree with me, too bad…You’re not picking for the Bills. Regardless, have at my pick. I welcome your perspective in the comments below.