The MCM Community mock draft rolls on with the Minnesota Vikings pick.

With the 8th pick in the 2014 MCM Mock Draft, the Minnesota Vikings, represented by leerafuse, select... 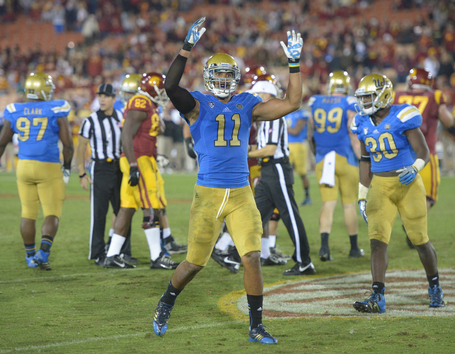 Here is the analysis from leerafuse:

With a new coaching staff in place, a hard nose defensive mind for a head coach, defense is the pick.

The heart of their defensive line is gone with Allen and Williams out the door, but did sign Linval Joseph, the former Giant, while also resigning Fred Evans and Tom Johnson. Also by adding Barr with the first rounders of last year, Sharif Floyd and Xavier Rhodes gives the Vikings a nice young nucleus to build around on D. Now the question of why 8th for a "Boom or Bust" title which seems to be following the raw Barr around. I believe with Zimmer at the helm, Barr will blossom under Zimmer who will know how to correctly use Barr and get the most of of his freakish play.

Why no QB? Even tho QB seems like the biggest glaring need for the Viks and Zimmer is probably tired of watching a average QB in his days at CIncy, I do not believe there is a sure fire hit at QB, and I believe there are some great QB's that could be had in the 2nd to 3rd rounds (Mettenberger). I believe with the pieces on offense, Patterson and reigning Simpson, Matt Cassel can start the season and hold the fort while the next QB waits in the wings. No body in Minny wants a Ponder 2.0 situation again.

I could see them trading back in the first round then nabbing a QB while gathering a pick or 2. They do also need to fix the O-Line but 8th is too high to grab a guard in this draft and trading back could be the answer for QB and guard.

So there it is. ANTHONY BARR to the Vikings!

That is the last pick until Monday. A HUGE thank you to everyone who has made their picks so far. Everyone has done an outstanding job.

The Buffalo Bills, represented by TitanNDCClothing, are now on the clock.