The MCM Community mock draft rolls on with the Oakland Raiders pick.

With the fifth pick in the 2014 MCM Mock Draft, the Oakland Raiders, represented by Dynamic Dreadlocks, select... 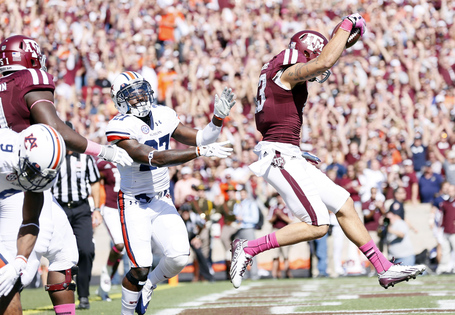 Here was Double D's analysis of the pick:

he Oakland Raiders are an organization that prides itself on making crazy draft-day selections. They are big into skill position players with speed. My pick here would have been Sammy Watkins, but since he's off the board, the Raiders elect to go with the next best WR on the board, Mike Evans of Texas A&M. Evans doesn't possess the blazing speed that Watkins has, but the Raiders signed a speedy guy with great run-after-the-catch ability in James Jones. With Matt Schaub looking like the QB for Oakland for at least this year, they need to surround him with as much talent as possible. Mike Evans is no Andre Johnson (not yet, at least), but he can provide Schaub with a great pair of hands and a tremendous red-zone threat.

The Atlanta Falcons, represented by NolesBroncosFalconsTitansDuckUnited, are now on the clock.