The MCM Community mock draft rolls on with the Jacksonville Jaguars pick.

With the second pick in the 2014 MCM Mock Draft, the Jacksonville Jaguars, represented by Xanpham, select... 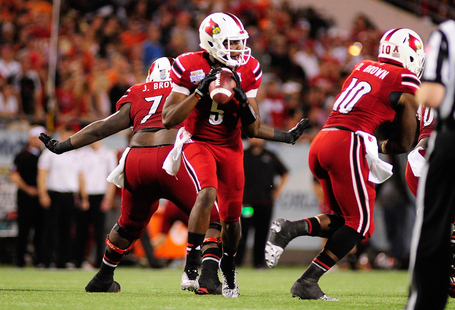 Here is X's analysis of the pick:

While there was certainly a burning need for a punter or kicker at this pick, I assured Shad Khan that the team should probably add a Quarterback, unless he thinks Chad Henne is the savior of the franchise...That's what I thought. Bridgewater immediately remedies the situation for the Jags, who have been without a real QB since David Garrard was playing well back in the day, hell, he would probably be the best signal caller the Jags have ever had before long.

With the defensive side of the ball having been beefed up, so to speak, over the past two offseasons, the team needs a guy who can take advantage of talents like Cecil Shorts (and Justin Blackmon if he can ever get his head on straight), and take the onus off the running game, which Jacksonville has been 100% reliant on over the past decade. Now that the days of MJD are done, so too should the 1 dimensional approach. Bridgewater gives the team the ability to compete immediately, as we all know a great QB can mask many other roster deficiencies.

The Cleveland Browns and Danomite are now on the clock.