Warmackin had this first pick and failed us. Why would you sign up to be a part of the community mock, especially with the first pick, and then just not to respond to anything?

With the first pick in the 2014 MCM Mock Draft, the Houston Texans, represented by warmackin Jimmy, select... 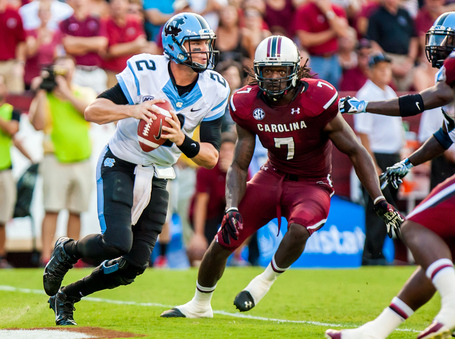 There is a very good chance the Texans take a quarterback in the real draft in May because they really need one, but I don't think that is the smart pick. While there is some upside with those top 3 quarterbacks, none of them are really anywhere close to sure things, and when you have the number one pick in the draft, you cannot afford to risk it.

Clowney is the best player in this draft. I know there were effort issues last year at South Carolina, but that was because he had nothing to gain. With the rookie wage scale the way it is now, even the #1 overall pick doesn't get paid like he did in the past. These guys really make their money on that second contract.

Clowney knows that. He will put the work in (at least until he is able to get the big pay day).

The St. Louis Rams and WelshTitan are now on the clock.