Will Nate Washington be a Tennessee Titan in 2014?

Share All sharing options for: Tennessee Titans: Nate Washington and the 2014 Salary Cap

As we move forward looking at the Titans' key players, or at least players that have key salary cap figures, Nate Washington poses a quandary. His cap number and salary are simple, $4.8M for the final year of his contract. There's no guaranteed money which means the full amount will be credited to the cap if he's let go.

The hard part for the decision on Nate Washington is whether or not he's worth the money. Here's last years stats per ESPN: 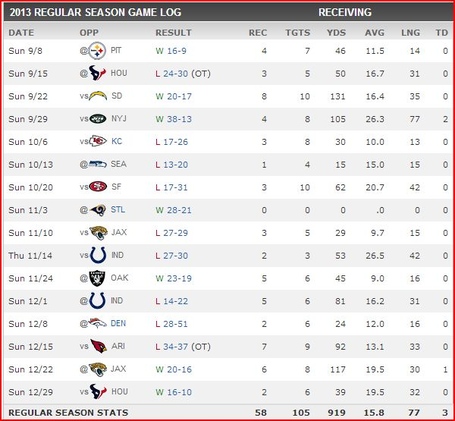 You may think the conglomerate of 58 receptions for 919 yards and 3 touchdowns on its own probably wouldn't merit his salary. He's 29th in yards, tied for 84th in touchdowns and 53rd in receptions. The one number that stands out, however, is his relatively high 15.8 average yards per reception which is 15th overall among players with a minimum of 30 receptions.

Taking stats out of the equation, Nate Washington has grown into the savvy veteran with leadership role as well. Something this team obviously needs. Leaving the receiving corps firmly in the hands of young Kendall Wright and even younger Justin Hunter from an experience standpoint doesn't seem like the best idea.

Jake Locker is another ingredient to consider as well. Washington and Locker came out this year with an obvious connection. They were on the same page with their routes and timing as Locker consistently looked to Nate for big plays down the field and key 3rd down pick ups. Their timing and rapport on the deep sideline hitch looked next to unstoppable when Jake was on the field. Letting Locker's go-to guy walk doesn't make sense if you're going to stick with him at quarterback.

Here's a list of the receivers and their average yearly salaries (column 2) per Overthecap.com. 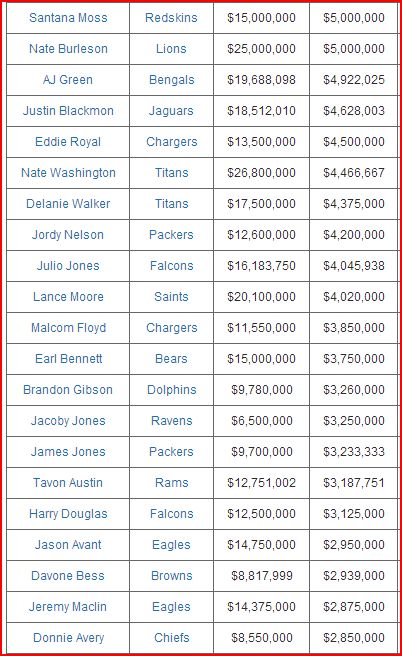 Overall, fans may salivate at the idea of garnering a quick $4.8M to spend elsewhere by dumping the receiver . But in terms of salary, Nate is actually right where he should be, between 32 and 33 on a per year average among receivers. He did seem to disappear in the middle of the season, but I believe more of that had to do with a change in play calling and a new quarterback than anything on his behalf.

If you brought in another free agent to take his place, a cheaper option doesn't get you as good a player in this instance. Without the change in quarterbacks during the season as well as a shift in game planning, his numbers could have been even higher. He brings more to the team and the position group than just his numbers as well. From where I stand I think Washington should stay.