Completion percentage has become a grossly overused stat line when talking about quarterback's accuracy in the NFL.

Share All sharing options for: Completion Percentage and Quarterback Accuracy.

The quarterback position is without a doubt the most analyzed, scrutinized and discussed position in football. Whether looking ahead to the draft and scouting the future generation, or debating a current player, the issue of accuracy is constantly brought up and is probably the most argued statistic related to quarterbacks.

But is it a statistic in and of itself? No. So we look to the closest related number that can help tell the story which is completion percentage.

Traditionally, there has been an imaginary line at 60% which dictates whether or not a quarterback is accurate or not. The Titans own quarterback, Jake Locker, has always had question marks surrounding his accuracy that followed him from the college ranks into the pros. The detractors will point to his 54% completion rate in college. His defenders would say that you have to actually look at the circumstances involved. He was on a bad team with no receivers and a horrible offensive line.

The question really comes down to, whether or not that over a year's worth of games in the NFL, we can assume that the mitigating and circumstantial situations will become a wash among quarterbacks. What I refer to are causes of an incomplete pass that are not a result of the quarterback's inaccuracy, but rather quick defensive presure, throw aways, receiver drops, or even a new system that leave the receivers and QB not on the same page all of the time.

One item in particular that I've always thought should be separated are the throw aways. A quarterback may be making a sound decision to not force an issue or avoid a sack by throwing the ball away. If on a team with an inferior supporting cast, the quarterback may be forced into that situation more than one with a better team around him. Conversely, you could argue that the better quarterback gets rid of the ball quickly and decisively, leading to less situations where a throw away is necessary. This may be true, but still does not reflect the quarterbacks accuracy so much as decision making.

Let's look at the quarterbacks and their completion percentage over the 2013 regular season. 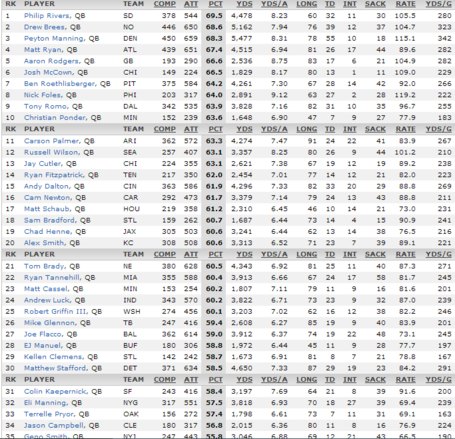 The range is large from top to bottom. Case Keenum and Brandon Weeden were actually cut off of the image with percentages of 54.2 and 52.8 respectively. I would say that there's no surprise that the quarterbacks that top the list are all considered some of the best in the game. But the 17% difference between top and bottom reaffirms the notion that while completion percentage may be a good indicator of a quarterbacks overall ability combined with surrounding circumstances, it should not be used as an indicator of accuracy. Eli Manning's ball placement can't be that much worse than Josh McCown's.

Let's take a look at the two quarterbacks that just played for the NFC Championship. Russell Wilson ended the season with 63.1%, ranking 12th overall of qualifying quarterbacks. Colin Kaepernick finished the regular season with 58.4% finishing all the way down at 31st. Is Russell Wilson really that much more accurate than Kaepernick? If using this stat as a measuring tool, then you would have to say yes. Kaepernick has his detractors for sure, but accuracy and ball placement is not one of this shortcomings.

When it comes down to it, the difference between the two players numbers in this category are roughly one incompletion per game. That's it. That one throw cold have been a drop, a tipped ball, or a great play by a defender.

It's nice to use stats to create and defend arguments. While they can definitely support or take away from a particular case, they shouldn't be the case in and of themselves. "Stats don't lie", unless you are using a stat for more than what it is. In this case completion percentage and accuracy just aren't the same thing.