This article will attempt to understand what the base formation of our front seven might look like in 2014.

Share All sharing options for: Ray Horton's Hybrid Defense - The Base Front Seven

Fans, and people in general, like to put things into a box. Categorically defining things allows wholesale, black and white conclusions to be reached definitely and swiftly. And, we've seen this pretty clearly since the announcement of the hiring of Ray Horton as the Titans defensive coordinator. You've all heard the line:

"The Titans run a 4-3 defense. Ray Horton runs a 3-4 defense. What does this mean for our personnel?"

Like most things, especially those pertaining to a defensive scheme, the answer isn't nearly as clean as fans would like. Ray Horton said as much during his first press conference with the Browns last year:

"That may mean one snap being 5-2, the next snap it may be 4-4. It will be predicated by what the offense does. We have athletes that can stand up, that can put their hand in the ground, that can run, so that's why I go back to the multi-front defense.

"I can't tell you what we're going to be right now. It depends on who we line up game one against and what do we need to take away."

This is exactly what you want to hear out of a coordinator. Multiple and adaptive. And, really, as we'll see, the things players will be asked to do up front shouldn't be all that different than what they were asked to do in 2013. Now, while the tasks may be the same - specifically one gapping - the execution will be quite a bit different. First things first, let's get to basics. 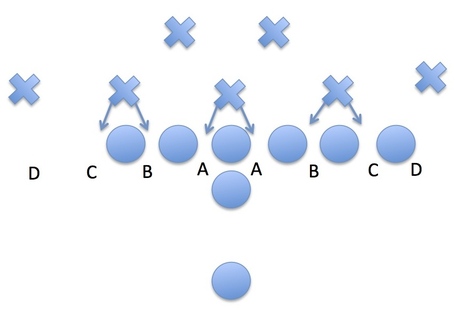 This is a basic 3-4 look. The premise is fairly simple. The nose tackle and both defensive ends are going to be head up on a lineman. By this, I mean they won't shade one way or another. Post snap, their goal is to hold their ground and eat up both gaps to their right and left. This is referred to as two gapping (as they are occupying two gaps). If executed correctly, this allows effectively all primary gaps to be occupied, allowing for linebackers to freely pursue the football.

Now, as you can imagine, the depth of this conversation far exceeds one basic paragraph. The basic take home here, for the purposes of our discussion, is the idea of two gapping. When discussing wholesale defensive changes, generally it's this principle that requires the largest personnel change. The disruptive, gap shooting defensive lineman is generally a different variety than a lineman that's asked to two gap. It's this overlying idea that leads to fear mongering among a fanbase when a 3-4 coordinator comes to town. But, remove the two gapping principles, and you're mostly just looking at window dressing on a basic 4-3 Under front - that being that the weakside EMLOS is standing as opposed to having his hand in the dirt. 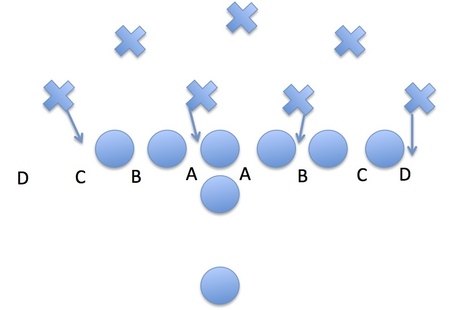 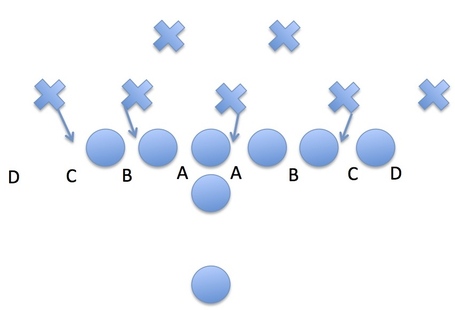 Above are the two basic 4-3 fronts. Over/Under refers to the positioning of the linemen. Over positions the strength to the offense's strongside (where the TE is aligned). Under positions the strength of the defense to the weakside of the offense. In an under front, you'll note that both the weakside defensive tackle and defensive end are isolated. This is not the case in the Over front, where the TE potentially can act as an additional blocker. For this reason, many coaches prefer the Under front as a method to get after the passer with a talented DE and DT.

You'll also note in this formation that all the personnel is "one gapping". The guys up front aren't occupying space. Rather, they are attacking gaps. Similarly, the linebackers are now just responsible for the gap in front of them (just in general - gap exchanges aren't uncommon from play to play).

A couple other odds and ends regarding lineman technique. Just like there are gaps, coaches also refer to lineman positioning along the line by number. The guys at Pro Football Focus have a great image diagramming this:

So, in a 3-4, when the NT is "two gapping", he's in a zero technique. The two gapping ends are in a 5 technique. You'll note that both of those are head up alignments.

Alternatively, in the one gap alignment, the defensive tackles are generally shaded to one side or another, in a 1 technique or 3 technique. This allows them to shoot the gap they're assigned to.

Again, all this is intended to just act as a primer. As you start adding layers, things begin to get a lot more complex.

With a base for the discussion now in place, where does Ray Horton fit into all of this? 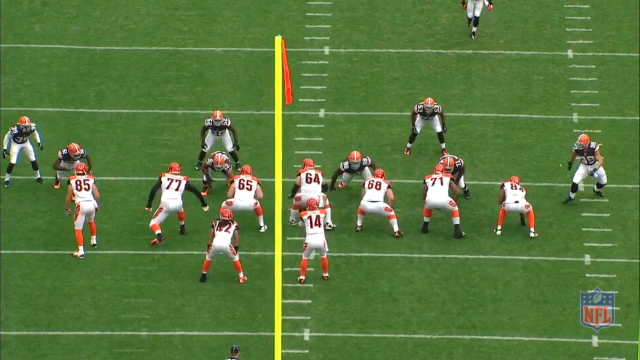 Turn on any given play for a Ray Horton defense, and this is likely the front you're going to see. By that, I mean that this is generally his base alignment. His scheme is probably best defined as "multiple". But, for those of you looking to put it into a box, I'd say it has a lot more 4-3 Under tendencies than it does 3-4. (It's hybrid in the sense that it's 3-4 by personnel, but 4-3 Under in function.) Probably the most important of which is that the front seven typically "one gaps". You'll note that based on the alignment above, which is basically reflective of the 4-3 Under diagram (note, the outermost defender on the left is a defensive back in man coverage).

What I've learned about Horton is that what you see is often not what you get based on pre-snap alignment:

This play is a 5 man rush that includes a Mike linebacker blitz. But, it's the stunt by the weakside end (or OLB/Buck) and tackle that makes the play hum. Now, this isn't reinventing the wheel, in fact we saw this quite a bit from the Titans this past year. These types of things are commonplace for Horton. Especially on passing downs, the goal is to attack protection schemes. By moving guys around to different gaps, stress is put on the offensive line to handle the exchange correctly.

Notice the rushers on the weakside (right) of this play. Presnap they show A and B gap pressure. Post snap they slant strong side to the next gap (both A gaps). The weakside linebacker follows behind the end and gets free totally clean through the B gap. When you talk about schematic pressure, this is exactly the type of play that would come up. Scheme created this pressure. But, I also included this play as a reminder that it's not always X's and O's, sometimes it's Jimmy's and Joe's. The play gets pressure exactly as drawn up on the whiteboard, but, the corner can't execute the tackle in space.

A final play I wanted to include was a standard run blitz. All the gaps are filled (note, one gapping) and the SS steps up and makes the play. In this case, the defense lines up and executes exactly what it shows.

What does this mean for the Titans front seven?

Things should feel very similar for our front seven. The concerns about Casey being pigeonholed into a two gap, NT spot are probably overstated. I'd expect him to remain in an attacking 3 technique. Perhaps this means his position is renamed as DE, but the function will remain the same. Linebackers should largely remain unaffected. Same goes for tackles for the most part. I do expect Hill to be asked to two gap some. Same goes for Pitoitua. My hope is to elaborate more on this in a future post, but my expectation would be more of a hybrid front where we two gap on one side and one gap on the other.

The biggest question mark for me is the Open End spot. In the Under, this is often referred to as the LEO position. In a 3-4, it's sometimes called a Jack rusher. Buck is also a common name for the isolated EMLOS. Whatever you want to call it, this spot has me a little more intrigued. In both Arizona and Cleveland, he dropped this rusher somewhat frequently into coverage. I wouldn't go as far as to say it was common, but it certainly happened more than we currently see from our current ends. They did, however, have more athletic DE/OLB hybrid type players. The thing about Horton is he doesn't appear to be overly dogmatic, so I can't see him forcing a square peg into a round hole. Still, I wonder how those responsibilities play out (or if they are removed altogether). Wimbley has fit in this spot in the past, but, in my opinion, hasn't shown production to be relied upon as the primary pass rusher. I like Morgan's skill set, but he doesn't fit on the open side. That is, I'm comfortable with him as a pass rusher, but wouldn't want him dropping into coverage. He'll fit just fine on the strong side. To me, this is the biggest hole for Horton if he wants to continue to take the same approach. It's one that will need to be addressed either via free agency or early in the draft.

This is just scratching the surface. My intention is to elaborate more on Horton's other sub packages he likes to mix in, as well as the coverage shells that he runs behind these fronts. The biggest takehome I got from watching film of Horton's defenses was excitement. The pressure schemes are phenomenal, but not reckless. He manages to create solid pressure, though often times it's not at the expense of gap integrity. That said, as pointed out in the second GIF, exercise patience. The scheme may be sound, but you need the guys capable of executing. We're pretty close in that aspect, but still sorely missing some good linebacker play and a true pass rusher. We might make a leap to a top 10 unit in 2014, but know that we just landed one of the best defensive coordinators in the NFL. He'll have this unit headed in the right direction.