Titans fans want a passing team. There's a lot of talk during the season about the new NFL and the way the game is changing. The playoffs seem to buck that trend when you look at the teams still standing.

It's amazing to me sometimes my head doesn't fall of my shoulders with the amount of head shaking I do. The comments on the radio or below articles around the internet are always good for a raised eyebrow, always have been and always will. The problem, however, is when a fallacy is propagated by the media, fanning the flames of knee-jerk fan reaction.

The Mike Munchak regime took a lot of heat from Titan fans for being too "old school". Their stated mission of being a team that runs the ball well and that plays solid defense was laughed at as eyes rolled hard into the backs of heads. The NFL has moved on, that's a poor philosophy, it's not like that anymore, right? The prevailing sentiment both from fans, but also national media members, is that you need to sling the ball around the yard to win in today's league.

Quite simply put. That's not true.

Let's take a look at the league's rushing statistics for the 2013 regular season. 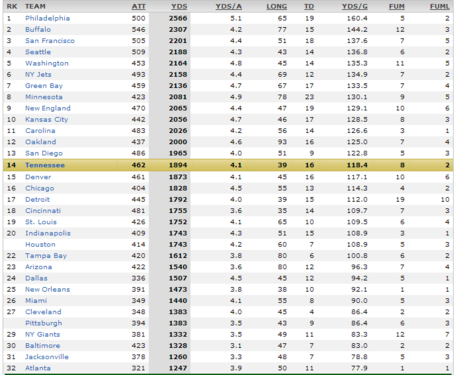 So what about defense? 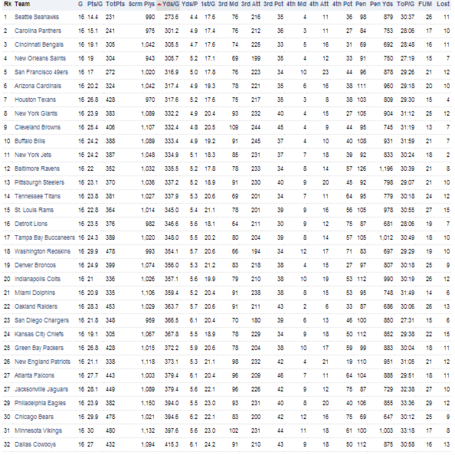 What does this all tell us? Maybe you don't know what you think you know. Maybe the eye test and your memory from the weekend's highlights have you mislead. Part of me wonders if this is a result of the Red Zone channel. When all you see is the results of drives and the final high flying play, you tend to play into the sensationalism created by the channel. No one sees how the team actually got there anymore.

To be fair in this assessment, I also looked at the league's passing statistics. 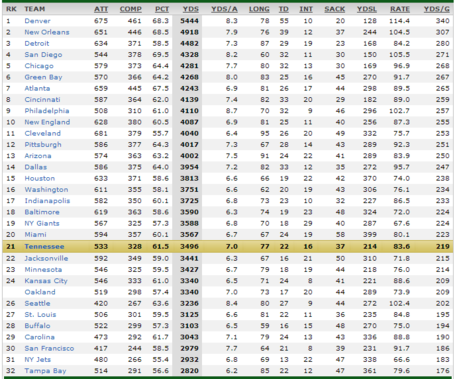 After watching a fabulous two weekends of playoff football, play by play, it seems to me that running the ball and good defense still win games. Especially when it gets cold, rainy, and windy. It certainly doesn't hurt to be prolific on both sides of the ball. 3 of the 4 remaining teams have excellent rushing attacks and solid defenses, the other team is the Broncos. That's not to say that you can't win with a different philosophy, but you better have Peyton Manning to do so.

It doesn't seem that it was Munchak's philosophies or vision that ended in his demise, but rather his lack of execution on that goal. The concept was right, the implementation is what didn't work. So the next time you're at the bar with your friends talking about the Titans, let's keep this in mind, and refrain from unfounded cliches about throwing the ball more or the concept that running the ball is antiquated. When talking about the head coach you want, keep in mind that you don't necessarily want an offensive coordinator that will have the team throwing for 4,000 yards. What you really want is to win, and go to the playoffs, however you get there.