The Titans got a huge win in Pittsburgh yesterday. Here are some interesting notes on how many plays each player played in the game against the Steelers.

The snap count from yesterday's game is below. After the chart we look at a few things that jump out. 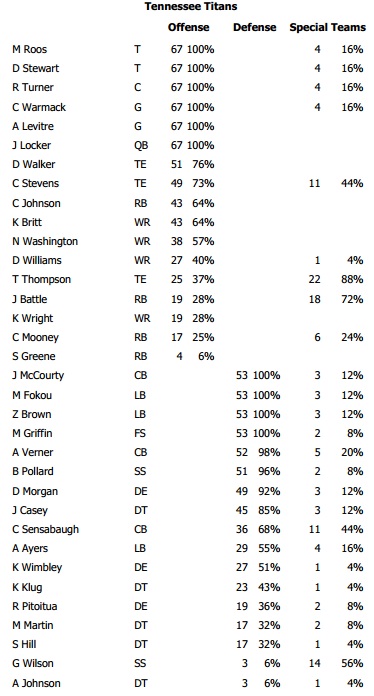 -The Titans used the tight ends a lot. Both Delanie Walker and Craig Stevens played more snaps that anyone outside of the offensive lineman and Jake Locker. Part of that is by design, but part of it is because they were just grinding it out in the second half.

-Kamerion Wimbley played on 51% of the snaps yesterday. Last year he was 80-90% in almost every game.

-Zach Brown played every single snap and made his presence known. That pick was widely criticized on draft day, but it might end up being the best pick of that draft for the Titans.

-Speaking of that draft, Kendall Wright played just 19 snaps yesterday. He is clearly behind Kenny Britt and Nate Washington right now. Expect him to get more snaps next week because they won't be using as many two tight end sets.

-Moises Fokou played 100% of the snaps and was pretty effective. That is not a good sign for Colin McCarthy.