A look at some important plays from the Titans - Chargers game.

As you'll no doubt note, this post is offense-centric - and by centric, I mean entirely related to the offense. This isn't really by design. The plays that happened to jump out at me were mostly on the offensive side of the ball this game.

Personnel: Titans line up in 12 personnel with Thompson flexed out in the slot. 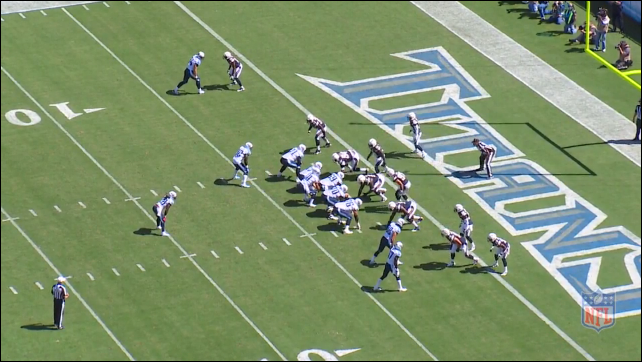 Analysis: Have I ever mentioned that I hate the bootleg? Well, if you haven't heard it before - I hate the bootleg. It's a constraint play in a similar way that the zone read is a constraint play. As you'll see in the play above, the Titans fake an outside zone run. Common in these types of runs is leaving the backside EMLOS (end man on the line of scrimmage) unblocked. Now, when that backside defender gets too aggressive in pursuit, the bootleg is - theoretically - designed to punish that defender. And, in theory, that's all great. Problems arise when that EMLOS doesn't cooperate. When you think of broken plays, sometimes there's things you just can't avoid. Like, blown blocking assignments, good defensive plays, poor routes, etc. With the bootleg, however, there's a risk everytime you call this that the play is broken up from the getgo. Even if that EMLOS does bite on the fake, there's still the normal hurdles the offense will encounter in most other passing plays.

In the play above, we run the fake to CJ - which actually may have scored if we handed it off - and the EMLOS stays home the whole way. To complicate matters, they bring a LB blitz to the front side of the play. Jake makes the only play he can by delivering the ball to Delanie, but this play is DOA before the ball is ever snapped.

Personnel: Titans line up in 21 personnel and motion Williams just outside of Dave Stewart. 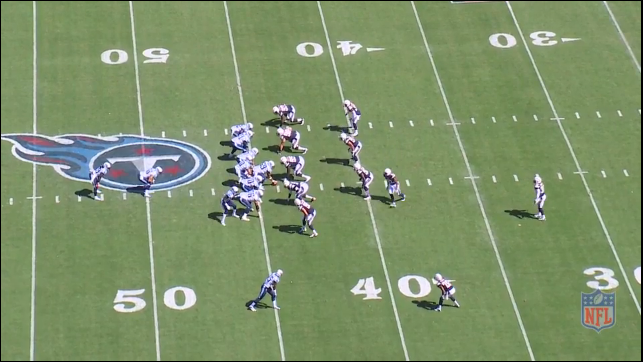 Analysis: Finally, we invite defenders into the box and take a shot deep. Titans fake the run. Jake takes a seven step drop with a hitch. Hunter is running a deep post here. Wrong read here, given that MOFC is intended to take away the deep post, but sometimes athleticism trumps scheme. We see that here. Jake does a good job moving in a cluttered pocket, and delivers a great ball. The safety gets turned around in coverage, and Hunter has him beat. The problem arises when the ball gets to Hunter. Instead of attacking the ball, and catching it with his hands, he lets the ball get into his chest, which results in an incompletion. Players touched on this post-game, and I'm sure Hunter heard about it this week. Good news is that this mistake did not repeat itself on the Titans final offensive play. 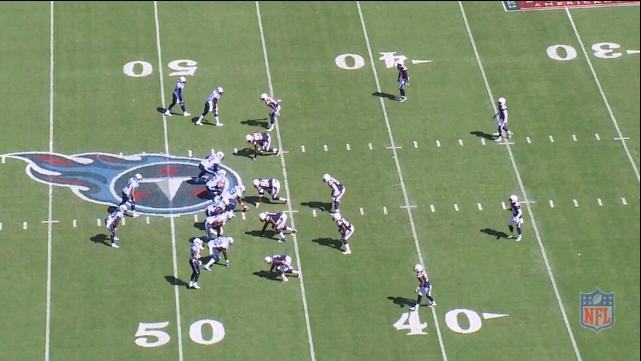 Analysis: Probably my favorite play of the game from Jake. Quick three step drop from the shotgun. Initial read is to Kendall on the crosser. The throw isn't there. Next read is to Nate who's running a curl route (and settles into the zone nicely, I'd add). Pocket is collapsing here as Jake gets through his reads, and Jake wisely elects to bail from the pocket. Poise is solid throughout the play, as is balance. From a developmental standpoint, this is great to see. Jake has struggled at times with progressions and buying time while he got through those progressions. He does both of those things well in this play.

Situation: 1st Down and 10. The play following the one above. 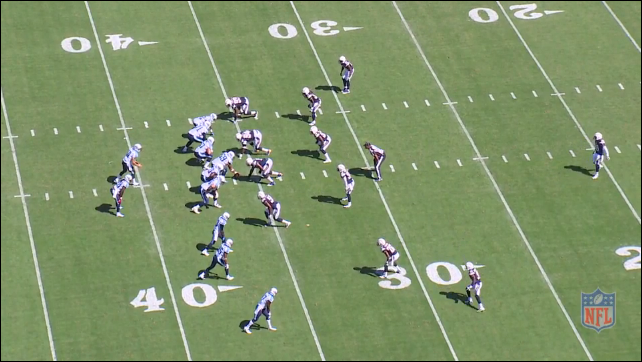 Analysis: Back to back plays of progress. Stewart gets beaten (again) here. Jake reduces the shoulder, slides outside the pocket, and throws a strike to Nate. Can't really nitpick on a play like this, but worth noting that a throw to Wright here might have gone for a big gain.

Situation: 1st Down and 10. Same drive. Two plays after the play above.

Analysis: Basic play, and one that was outlined by Loggains on Titans Online this week. Even numbers to the left side of the formation. The call is a lead draw with CJ as the lead blocker. CJ takes on the linebacker. Our receiver (which I believe is Williams) blocks the outside corner. It's on Jake to beat the safety based on leverage. The safety takes a step inside, and Jake wins to the corner.

As noted in the Hunter play above, sometimes athleticism trumps scheme. In this case, athleticism influences and creates scheme. Without an athletic QB, this play isn't in the playbook. I don't think Jake needs to be running the ball 10 times a game, but roughly 5 designed runs per game (or zone read plays) could go a long way to opening up other things for the offense.

Analysis: Titans line up in a 3x1 set. San Diego shows single high safety, and brings 5 man pressure. I'm not certain of the coverage call, but the important thing here is what's happening in the isolation route to Hunter. He's running a vertical against a soft corner. Single high safety tells Jake that if he can keep him honest before cutting the ball loose, that he won't be a factor in the play.

Post snap, protection is great. Half slide to the blitz side picks up the pressure adequately. Jake checks the safety for late rotation, and verifies the pre-snap single high look. This quick look binds the safety long enough that he's not a factor on a throw to Hunter. Locker cuts it loose to Hunter, who chews up the corner's cushion in a hurry, though he never actually "beats" the corner. Ball placement is solid from a risk reward standpoint. At this point, athleticism takes over. Hunter gives the corner a little nudge, but one that is rarely called at the NFL, and is common place on longer throws. All in all, it's actually pretty good coverage. The way that Hunter shields the defender from the ball, and reacts late to the play just puts the corner in an impossible position.

Perhaps the most exciting thing about this play is how simple it looks. While the play call itself is relatively basic, the execution isn't. Hunter's body control and balance post catch is remarkable considering the speed he's running and the distance thrown. The Titans aren't asking Hunter to do much, but as I wrote after his selection, the thing he does well is pretty powerful:

Justin Hunter may turn out to be a one trick pony. In many ways, Randy Moss had the same "problem". It turns out, though, that this one trick is arguably the most dangerous and valuable of them all at the receiver position. Even if Hunter is only targeted a handful of times a game, the vertical skill set commands respect from defensive coordinators.

Apologies for the abbreviated number of plays from the second half, as it's been a crazy week. There's more that could have been added, but Cliff's notes are that there's a lot to build on from this game. For me, this was Jake's best game to date, and by a pretty wide margin. I'm encouraged by what I'm seeing, and think we can expect to see more progress as the season continues.