There's a lot to like from the Texans game, but some questionable playcalling and lack of execution in critical moments ultimately cost the Titans a game they should have won.

Share All sharing options for: Titans-Texans: Film Review - Second Half

Today, we'll look at plays from the second half of the Titans - Texans game. You can see the first half analysis here.

Personnel: Titans line up in 12 personnel. They are facing a 7 man front by the Texans. 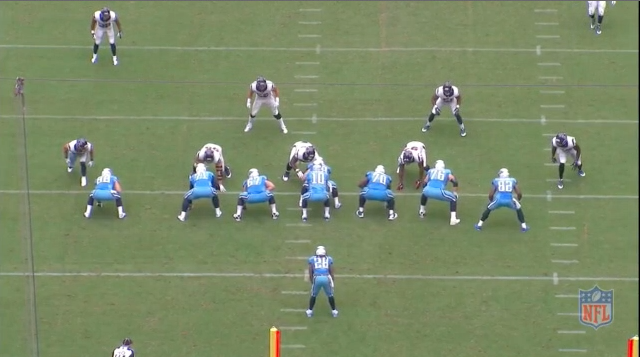 Analysis: Chris Johnson's problems with bouncing things are still very much an issue. We run a basic power play here. The play design is to follow Levitre who does a great job pulling here. If CJ attacks the hole, this actually might be a solid play. At a minimum, it's a couple yard pick up. Instead, we settle for no gain.

Personnel: Titans line up in 12 personnel. They are facing a 7 man front by the Texans. 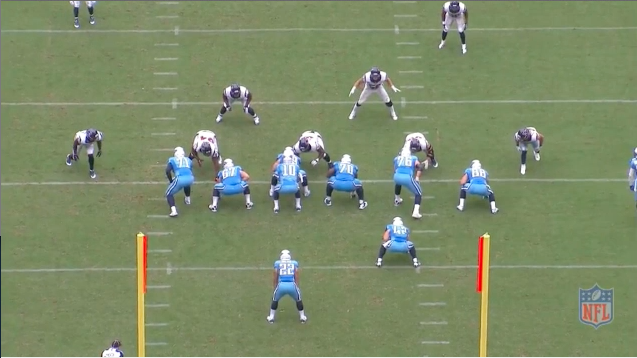 Analysis: Not a whole lot to add to this play. Warmack gets worked, which happened for a good portion of the game. Hard to say if this is cause for concern about our rookie, if it's a result of playing against JJ Watt, or some mix of the two.

Note here too, this play puts us in 2nd and 17. So, naturally, Dowell Loggains calls a run - with Jackie Battle - which proceeds to go for 2 yards. This then puts us in 3rd and 15. And, on third down - you know what, I wasn't going to include this play, but an animated picture is worth 1000 words:

Analysis: How is this man still starting at center? Are there takebacks on that whole Velasco release? I think we were just kidding. Oh, not the smartest throw by Locker, either. Roos doesn't exactly do any favors, but if Turner can hold his ground, then Jake has a clean pocket to step into.

Personnel: Titans line up in 11 personnel. They are facing a 7 man front by the Texans. 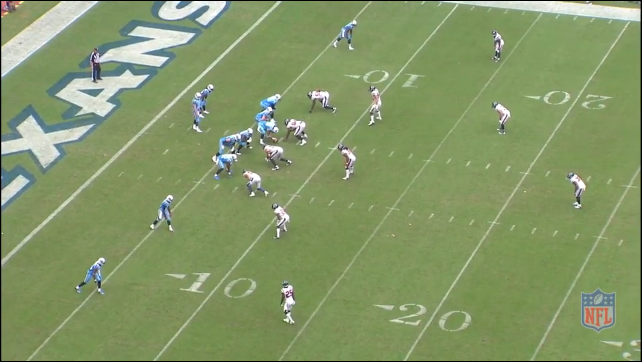 Analysis: It's throws like this that sometimes make you forget Jake's flaws. Jake reads single high safety pre snap. The Texans might be rolling that coverage post snap, but not enough for the safety to threaten. Locker identifies this and throws a strike. When he trusts the read, and the read is right, Jake can make every throw in the book.

Personnel: Titans line up in 11 personnel. They are facing a 6 man front by the Texans. 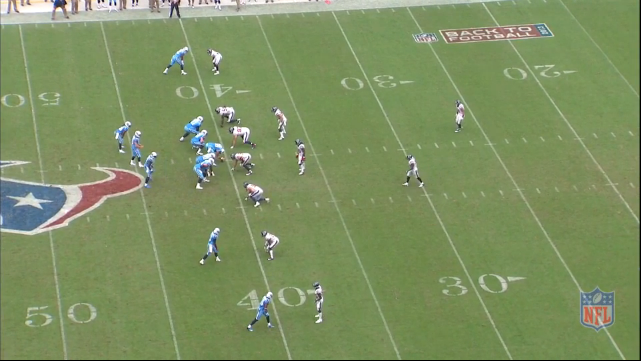 Analysis: This play comes following a deep incompletion to Kenny. The drive has been largely no huddle, but this play comes after huddling due to the incompletion. This drive has also consisted of mostly 11 personnel. Every snap, with the exception of the first one from the goal line, has come out of the shotgun.

The play here is fairly basic. It's just a counter out of the shotgun. However, by spreading the defense out, it allows CJ more room to operate, leading to a 15 yard gain. Given Johnson's skillset, creating space and defining reads is probably the best bet for success. The best way to achieve this, in my opinion, is to spread the defense and run a heavy dose of Power and Counters with some zone mixed in.

Personnel: Titans line up in 22 personnel. They are facing a 9 man front by the Texans. 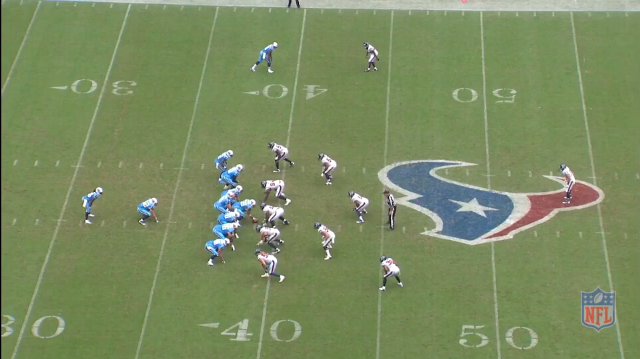 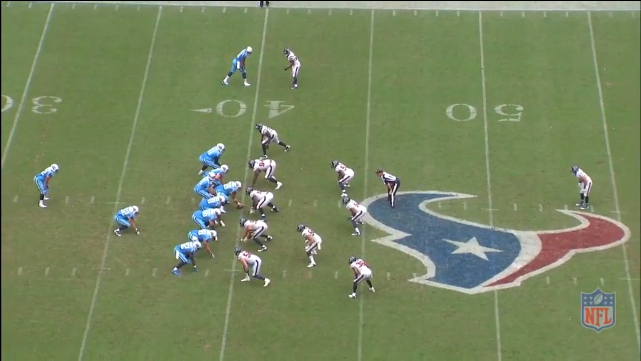 Analysis: The two plays above are back to back stills. The Titans have the ball following two back to back dominant performances by the defenses - pick six, and then a 3 and out. 4:00 left. Strategy? Play not to lose.

These two play calls indicate that Loggains was totally out of touch with the flow of the game. Two reasons:

2. The zone game was broken.

So, what does he do? He runs a zone play with Jackie Battle out of heavy personnel. Next play, he runs a power play right at JJ Watt. Third play, a screen pass goes for an incompletion.

I have no problem running the ball here. It's the manner in which he chose to do so that bothers me. Everyone watching this game - Wade Phillips included - saw them trot out this formation and knew exactly what was about to happen. Momentum was with Tennessee and they took their foot off the gas.

Personnel: Titans line up in 11 personnel. They are facing a 6 man front by the Texans, but they bring both safeties immediately prior to the snap. 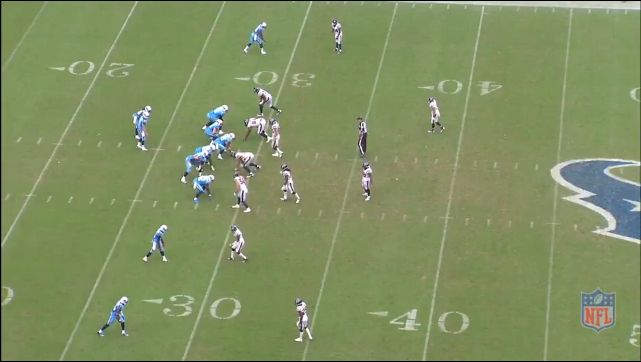 Analysis: Following a Texans touchdown drive, the Titans get the ball back with a little less than two minutes to go. On first down, Jake throws incomplete to Nate Washington. Second down, a great throw to Kenny Britt on the sideline that nearly goes for a first down. This sets up 3rd and 1.

This play is tough to watch, and there's not a whole lot I can add to it here. Jake is clearly rattled by the perceived pressure from the safeties. He never sets his feet which are basically pointed to the sideline. This is a misfire in a critical situation that, if completed, might have been an explosive play that wins the Titans the game.

There may have been some more plays after this one that I could include, but there's only so many Texans highlights I can stand to put into one post. Hard to really blame the defense late in this game. There was some sloppy play, but the reality was that they put the offense in a position to close this game out and the offense couldn't keep up their end of the bargain. There are obviously a number of contributing factors to this loss, but I'd have to say that Loggains is complicit in this blame. If Tennessee is going to be a playoff team, he'll have to get better situationally as the year goes on.