Everything You Didn't Know You Wanted To Know About Illegal Touching

There was mass confusion in the Tennessee Titans game against the Houston Texans when illegal touching was called on a punt in the second half. A lot of the confusion was set off by the announcers on CBS not knowing the rules. Luckily for us at MCM, we have an in-house official. Here he has answers the question; Illegal Touching - What's Up With That?

Share All sharing options for: Everything You Didn't Know You Wanted To Know About Illegal Touching

Writer's note: This post really got away from me. Sorry. I really wanted to explain it in depth and not just a one sentence comment.

And another: it appears that the NFL rule book calls it "first touching"  (like high school football) instead of "illegal touching." The concept is the same and Jeff Triplette gave an NCAA explanation!

So the Titans had a play occur in their game against the Texans that is actually a very common play that still managed to leave fans of both teams scratching their heads: an illegal touching on a punt. So let's see what the officials did right and what they missed on this particular play.

Disclaimer: I am not an NFL official, nor do I play one on TV. Nor did I stay at a Holiday Inn Express last night.

Kicking plays, at all levels of football, are consistently the most difficult plays to officiate. Why is that? Because kick plays have the most complex rules and there are just fewer kick plays during the game. But to know what is going on on the field, first we should cover some definitions so we know what we are talking about.

The definition of "kick" - It's important to note that during a single play of a football game, the word "kick" can have two different meanings. A kick describes the play; It's either a free kick or a scrimmage kick (more on those in a sec). A kick is also the status of the ball. Once the ball has been kicked (stay with me here) the loose ball is referred to as a "kick" until it is possessed. This is important because while the ball is still a "kick," there are special rules regarding who may touch and/or advance the ball when and special penalty enforcement rules if a penalty occurs during the play. I put "until it is possessed" in bold because that is the distinction. Possession. Not just touching by either team (touching, not possessing, of a loose ball is referred to as a muff).

OK. There are two different kinds of kicks right? Free kicks and scrimmage kicks. All of the kicks during the game fall into one of those two categories.

Scrimmage kicks: scrimmage kicks are punts, field goals and extra point tries. Scrimmage kicks are different from free kicks in that once the kick crosses the line of scrimmage, the kicking team may not possess the ball unless it has been touched first by the receiving team. So if the kicking team runs down and jumps on a punt at the five (untouched by the receiving team), the ball will belong to the receiving team at that spot. Field goals are treated the same as punts (except for rules about where the ball comes back to if it is untouched or out of bounds)(you can line up in high school and college with a place kicker and attempt a field goal from your own 5 if you don't have a punter..not sure about the NFL in that regard).

Blah blah blah. So let's get to the point. Illegal touching.

Illegal touching (called first touching in high school..many of you may recognize that) is a violation, not a foul, in that there is no penalty prescribed for the committing of the illegal touching and it cannot combine with any other foul to create a double or multiple foul..meaning it can't offset if the receiving team does something wrong. This is why there is not a flag thrown for the illegal touching of a kick, only a beanbag (usually..sometimes it's so obvious it's not needed.)

All that being said, you completely understand what happened yesterday right? Right.

OK, let's talk about the play.

So you make the call. Did Verner touch the kick? 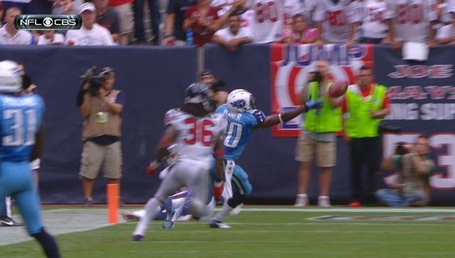