Arian Foster tied the game in the 4th quarter yesterday when he ran over Mike Martin for a two-point conversion. Here is a frame by frame breakdown of what went wrong.

The Texans needed a 2-point conversion late in yesterday's game to keep their hopes alive.  There was little doubt that they were going to go to Arian Foster.  The Titans, specifically Mike Martin, had a great chance to keep Foster out of the end zone: 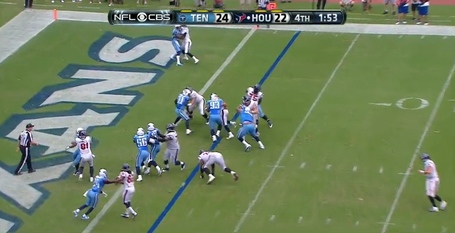 You can see there that Martin meets Foster at the line of scrimmage.  He looks like he has a great shot at bringing him down in this picture.

Another angle on the same picture: 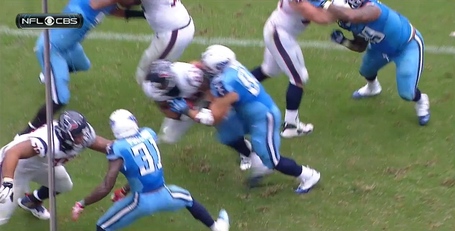 Martin looks like he is in great position to make the play here.  Unfortunately, things change quite a bit in this picture: 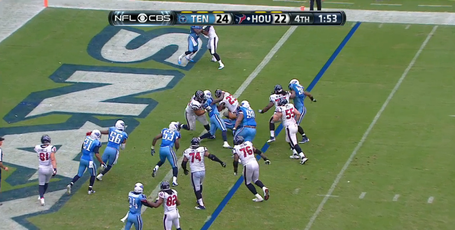 Martin has lost all of his leverage in this picture.  You know how it ends.  While this is a play that Martin has to make, there are a couple of things to keep in mind:

-Jurrell Casey said after the game that he got knocked out of his gap:

"You know, actually that was on me. I let the guy reach me on the play. If I would have been in that gap right when he cut back, I would have been there to make the tackle, but instead I got reached and he made a good run on the cutback. Good read and made it in the end zone."

Side note: I love how accountable this team is.

-There was an egregious hold on the play against Bernard Pollard.  Don't believe me? 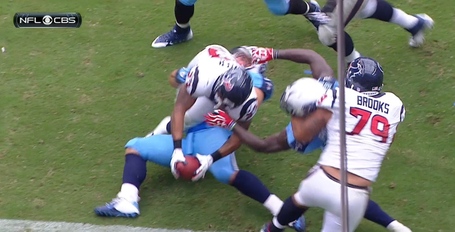 It blows my mind how that one was missed.

Like I said, Martin should have made the play, but he wasn't the only one that messed up here.  You can bet that this team will learn from this and make the play next time.