Titans vs. Texans: The safety

The referees correctly awarded the Houston Texans a safety yesterday when Chris Johnson failed to get the ball out of the end zone. A breakdown of the play.

Share All sharing options for: Titans vs. Texans: The safety

There was a lot of confusion yesterday in the fourth quarter when Chris Johnson was tackled in the end zone. The ball was originally spotted at the half yard line. Gary Kubiak then challenged the play and it was correctly overruled and called a safety.

Did the ball get out of the end zone? 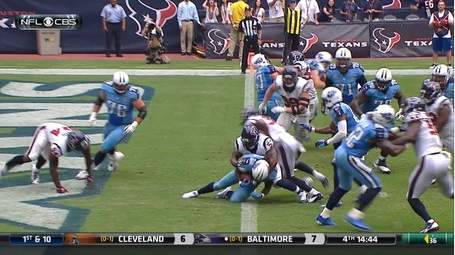 Clearly it did not, so the call was absolutely correct.

Wilcots was wrong on rules issues all day wrong. It really doesn't make sense that CBS can't get their people informed on the rules of the game. I understand the Titans always get some of the lowest guys on the totem pole, but how many NFL announcers does CBS employ? 10-12, right? Why can't they spend some time to make sure they know the rules? Inexcusable.

Titans vs. Texans everything we know