The Titans held a specials teams heavy practice today so let's talk about some return game shall we? 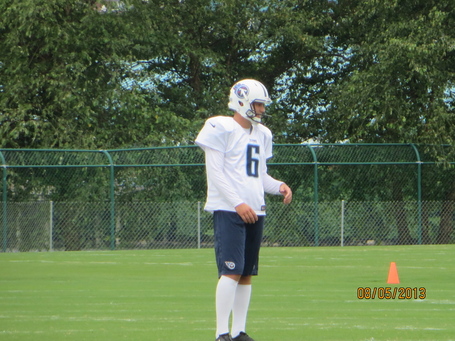 First, let me say Brett Kern was booming them out there today. There was one misfire but his leg looks as strong as ever. I haven't mentioned it but Rob Bironas hasn't practiced lately and his backup Maikon Bonani has filled in. The official word is that Bironas has some back tightness but he was never going to practice much. Bonani could get some work in preseason but he would be trying out for another team as the Titans will not carry 2 kickers. 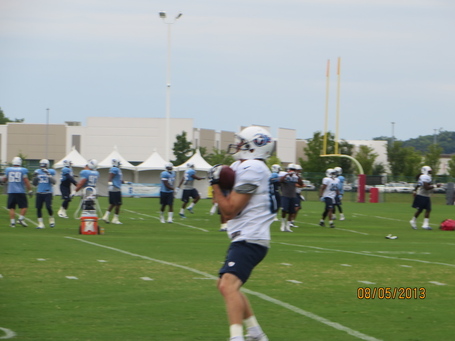 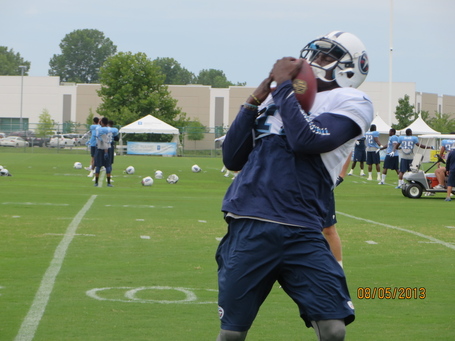 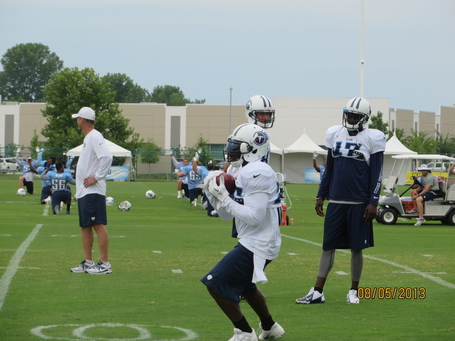 In the return game, I think it's going to come down between Darius Reynaud, Damian Williams and Marc Mariani. They have all 3 looked really good catching punts plus they have experience which cannot be discounted. Bonus in that they are all out there making plays at their positions which only helps their cause. 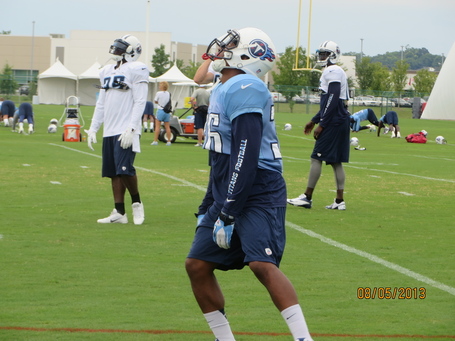 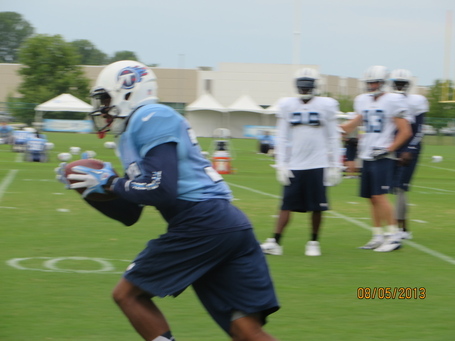 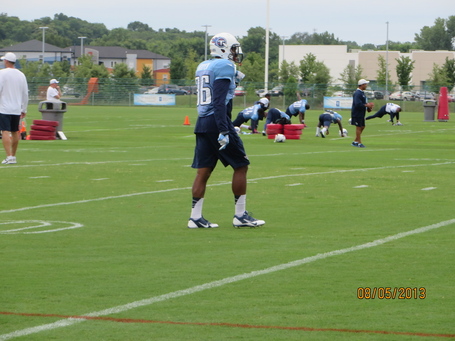 Khalid Wooten is a 6th round draft pick of the Titans and he could be a dark horse candidate to make the roster. He has nice return skills and you can tell he is comfortable in press coverage. The downside is that he is still learning the speed of the game but he definitely can play. The numbers work against him as well. He is a guy you will want to watch in preseason. 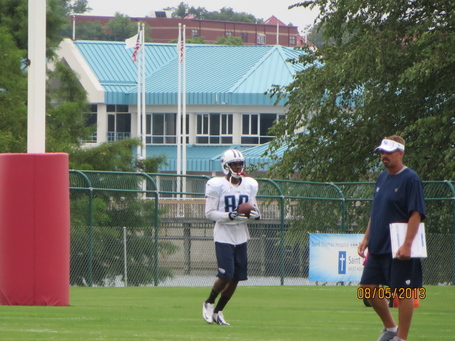 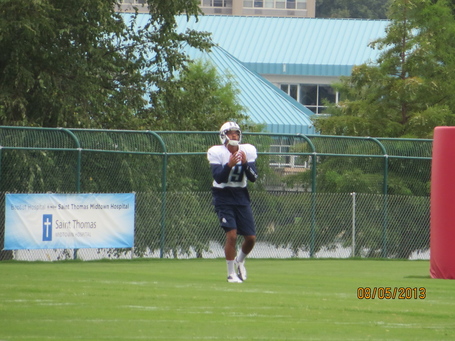 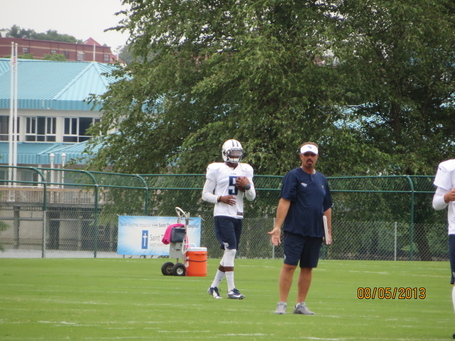 Rashad Ross, Diondre Borel, and Dontel Watkins are also seeing time in the return game and all are out there competing hard. I have tweeted this but it needs noted here and that is Watkins is almost always the first player out on the field. Unfortunately, the numbers work against them as well making the 53 but there are opportunities on the practice squad here and elsewhere. Hopefully, they will shine and show those abilities in preseason as they surely must know they are auditioning. 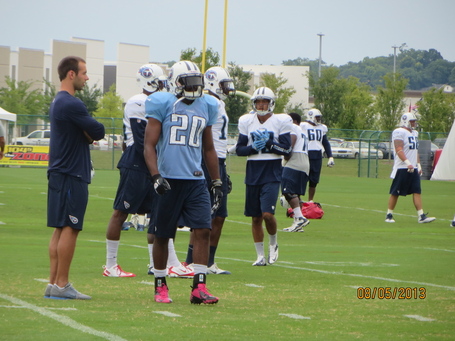 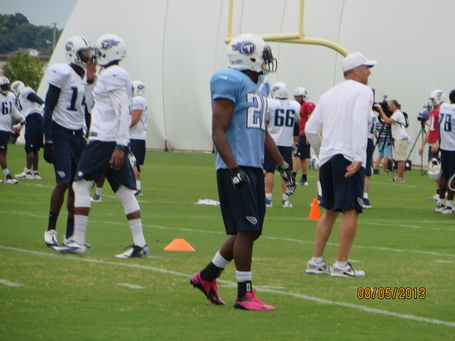 Alterraun Verner was rocking some nice kicks today and he really had a nice practice as well. The competition between him and Campbell is exciting to watch as they both split first team reps. Verner got some good work at free safety today as well. Verner made a particularly nice play today in coverage unfortunately I did not note who against. Campbell also made some nice plays in coverage. I would have to call that competition are dead heat right now and it's a good problem to have. I also want to say I was beginning to think BW3 wasn't NFL ready but he made a particularly nice play in coverage today. Looks like he is starting to make that adjustment. 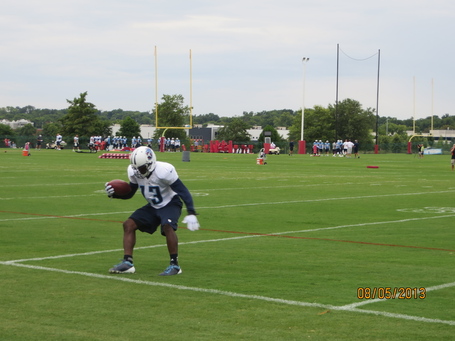 I think Kendall Wright losing weight (he lost about 15 pounds) is going to help him a lot. He is much quicker and more agile in his breaks. Still, he isn't as quick as Nate Washington who looked just fantastic in drills today. Nate the Great looks to be in great shape and he has very quietly had an outstanding camp. He was also sporting some really fly shoes today. 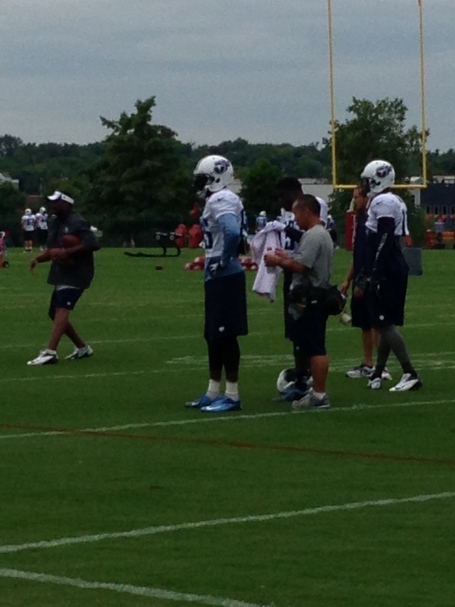 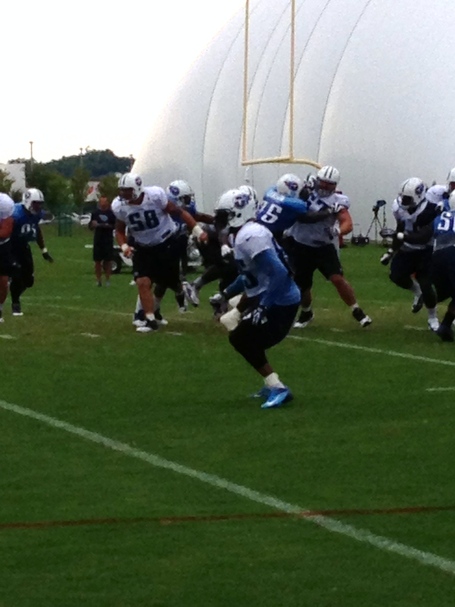 Kenny Britt, Michael Preston and Justin Hunter all had some nice catches today though Preston also had a bad drop. Still, the height of those guys makes it very difficult to cover them. Preston needed a nice camp and he is certainly having it. I find it hard to believe he won't make the roster at this point. 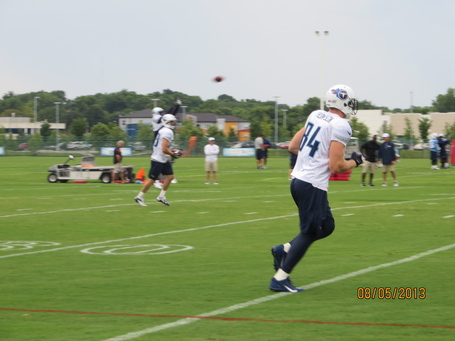 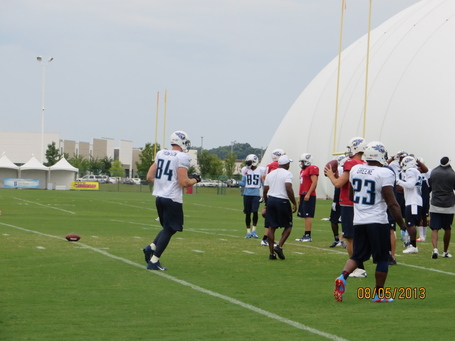 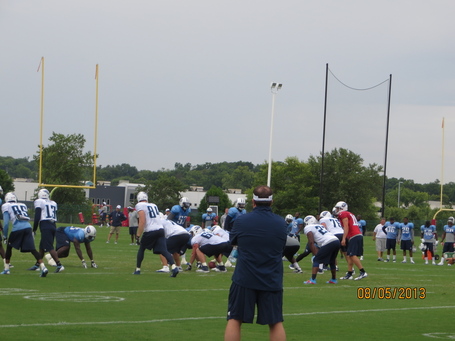 Jake Locker connected with Taylor Thompson a few times today and I think that is something you are going to see a lot this year. Thompson and Locker seem to have a good connection and Thompson has come a long way since 2012. He is also an outstanding blocker and I'm beginning to think he might get the spot in the offense the Titans originally had slotted for Delanie Walker. Walker was on the field today (he didn't practice) but he still has some noticeable stiffness in his leg.

At running back, Jackie Battle is tearing the field up with second team reps. While Shonn Green is having a nice camp I hope we get to see Battle with the first team offense to get a good comparison. Is that "battle" closer than we think? For me it's hard to tell without him getting reps with the first team. 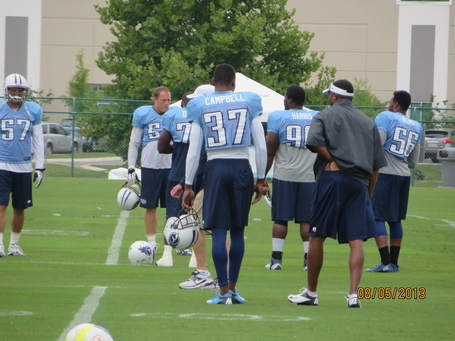 I can't say enough about how well Akeem Ayers is transitioning to playing defensive end and with his hand in the dirt. You can tell he has worked hard to learn the position and it is starting to show as he is looking more comfortable, and getting off the edge well, playing the position. I can't wait to see him play that position in preseason. It's been fun to watch him develop that part of his game. 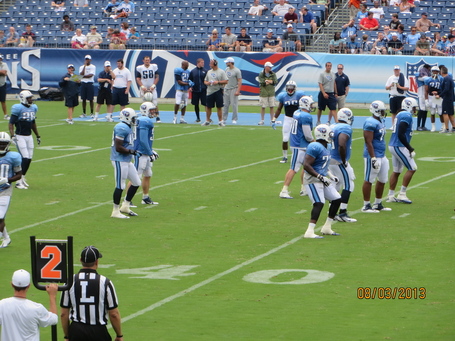 Another player who is transitioning nicely to playing multiple positions is Scott Solomon. What a difference a year has made for him. He is bigger and is doing a nice job at both linebacker and defensive end. Like Battle, this has been primarily second and third team reps. He is another guy you would like to get some time with the first team in preseason. Still, he is showing some nice moves on the field. Keyunta Dawson is showing some nice moves as well. 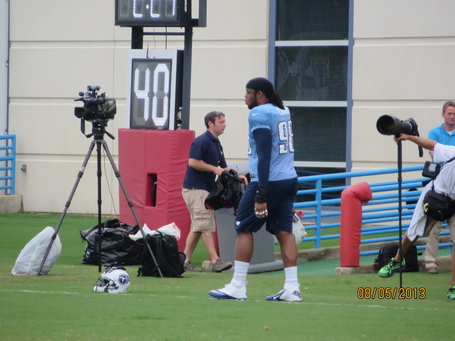 Finally, I can't say enough about how well I think Lavar Edwards looks for a rookie. He is much farther along than some young players and that likely comes from playing for a big time school like LSU. Edwards was a situational player there and the Titans look to use him similarly. Edwards is lining up at both defensive end and defensive tackle and showing the skills against the run and the pass that led the Titans to draft him. I look for the rookie to get some significant playing time in preseason as he learns the speed of the game.

One final note and that is Munchak pulled rookie guard Chance Warmack to the side and was talking and working with him today. I'm not exactly sure what prompted that but it certainly appears Munch is committed to being very hands on with his offensive line. That's really nice to see.

A few brief notes about injuries. Jalen Parmele practiced today. Karl Klug was sore and did not practice but it doesn't appear serious. Colin McCarthy and Zaviar Gooden seem unlikely to practice or play this week. Delanie Walker looks to be about a week away from practicing. I haven't heard any official word on Rob Bironas playing Thursday night.

That's it for now. You can find my photographs from today here. Be sure to post any questions you have or send them to me on twitter at @SportsBySharona.