It was a hot day at Titans training camp as the Titans head toward their first preseason game. What did we learn the day before a "walkthrough" before season ticket holders? Let's take a look shall we? 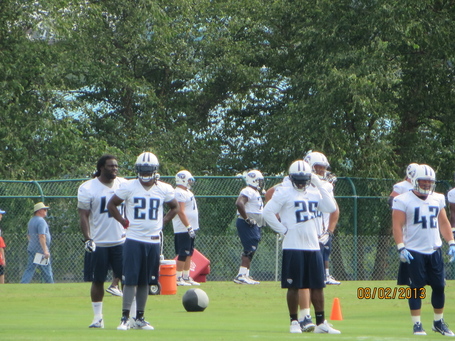 Despite reports indicating otherwise, Chris Johnson practiced today and I did not see any ill effects. Jalen Parmele is still out with what they call an "ankle." Colin McCarthy (hammy) and Zaviar Gooden (ankle) are expected to miss a week with their injuries but could play Thursday against the Washington Redskins. 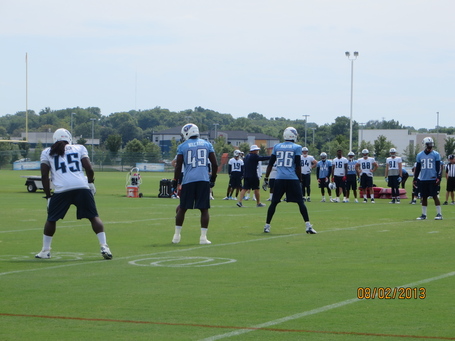 Kenny Britt did not practice but I would expect him to play tomorrow. Schwenke is still out but he might also play against the Redskins. Marc Mariani didn't appear to be limited either nor did Markelle Martin who is finally getting time on the field. 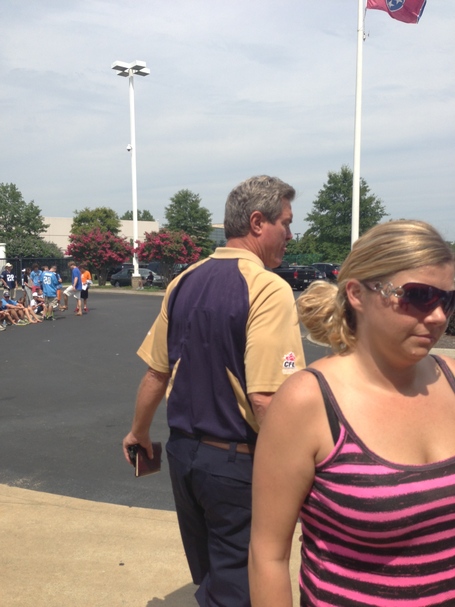 Once again a scout from the CFL was in attendance and he was from the Winnipeg Blue Bombers. I got a chance to chat with him and he was a super nice guy. I asked him if he was scouting anyone in particular and he said there a few guys. I rather doubt he is here looking at Stefan Charles but is probably scoping out the younger guys like those at wide receiver who might not make the team. 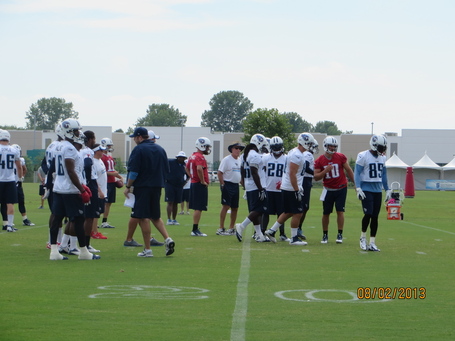 The Titans worked on a lot of red zone drills and overall I thought Jake Locker was sharp. There were a few errant passes but he connected on a couple of really nice passes including one to Michael Preston who made a fantastic catch in coverage over Jason McCourty. The photograph below of that catch is from Brian Hill who does an outstanding job taking pictures at training camp. You can find his photographs here. The photo is used by permission and much thanks to Brian for letting us use his fantastic work! 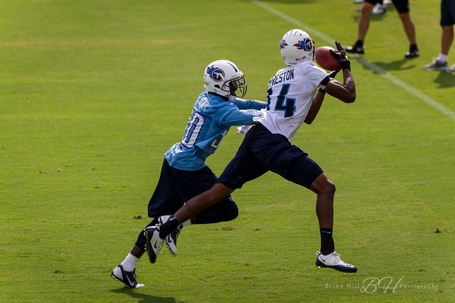 There were some mistakes out there by the receivers today. Justin Hunter is still struggling a bit with the playbook. He ran the wrong route and they sorta did a "do over." The second time around he made the catch. This was in WR vs CB drills with Locker making the throw. Kendall Wright also fell down on a play.

I have spent some time on the offense so let's talk about some of my observations from the defense. First, I believe I have mentioned before but Tommie Campbell is running with the first team at right cornerback quite a bit. He is having another strong camp and you wonder if this will be the year he finally breaks out. 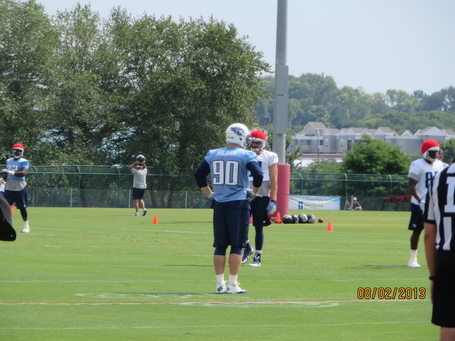 Scott Solomon has definitely bulked up and from my observations is playing mainly defensive end. I did note he practiced with the linebackers but when I have observed him in team drills he is playing DE. More on the DEs later. 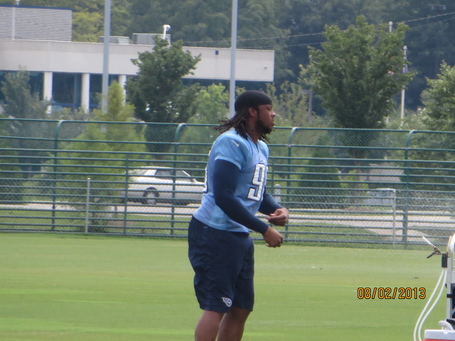 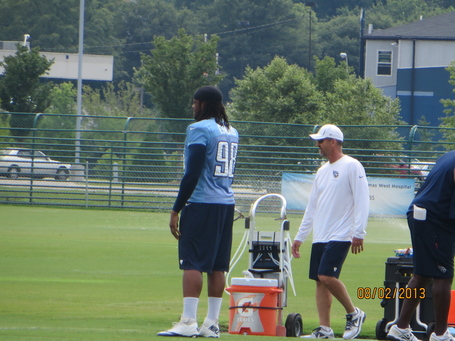 Levar Edwards played inside at defensive tackle quite a bit today. This was my first look at him inside in camp and I thought he did quite well. I'm really excited to see what Edwards can do in preseason. Again, in the coming days you will see me take a more indepth look at him. 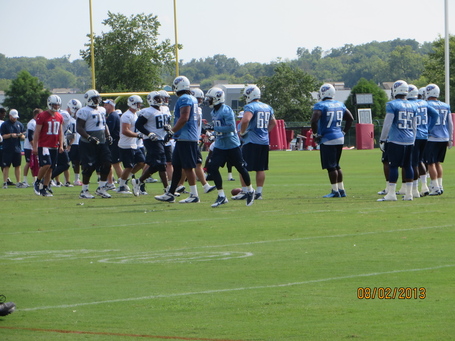 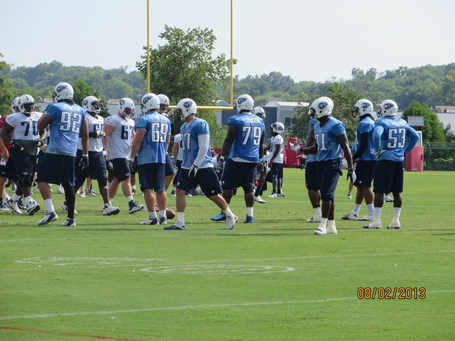 Stefan Charles had a nice play but I just don't see him making this roster unless he makes a bit push. Ropati Pituitua got more good snaps at RDE today and he batted a pass. Zach Clayton has made some nice plays as well.

Toward the end of practice the Titans were running a lot of 3 safety packages with George Wilson, Bernard Pollard and Michael Griffin. I see other people talk about Pollard in coverage as not his better suit but he looked good today. They ran some 4-3-4 and I am fairly certain they snuck in a 4-4-3. 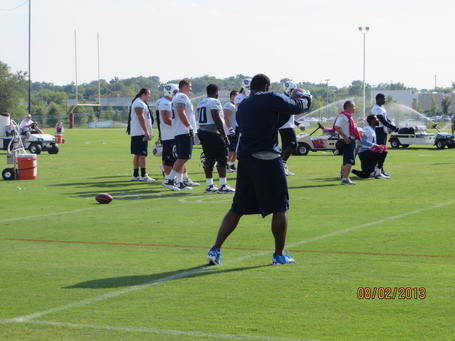 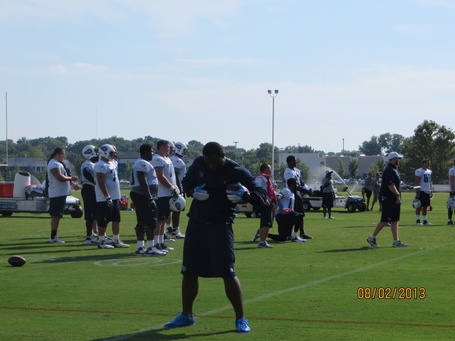 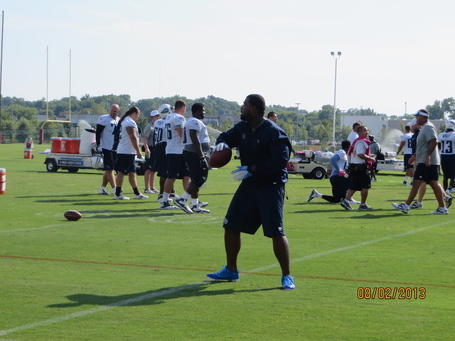 One final note and that is Delanie Walker came onto the field toward the end of practice and was catching some balls. He looks to be in good shape and I can't wait to see him on the field soon.

That's it for now and be sure to post questions you want answered either here or send them to me on twitter at @SportsBySharona. Look for me to tweet from the "scrimmage" which they are calling a "walkthrough" tomorrow. My photographs from today can be found here.