When it was initially announced yesterday that Titans running back Chris Johnson was not practicing it was thought that he was just getting a day off for rest. It turned out that he has a minor ankle injury.

Chris Johnson sat out yesterday's training camp practice after getting his ankle "rolled up on" in Wednesday's practice. It sounds like the injury is minor, and he should be back at practice in the next couple of days according to Jim Wyatt. That, obviously, is very good news. 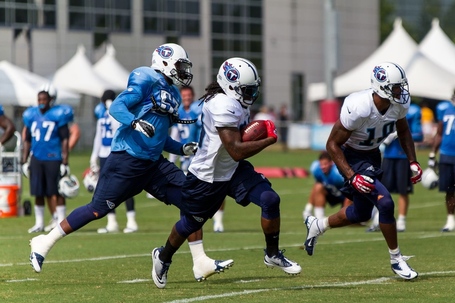 Wyatt also asked CJ about playing in the preseason. Here was Johnson's response:

It doesn’t matter," Johnson said. "Basically you just want to get in there and get comfortable.

How much running backs play in the preseason is always a subject for debate. Normally I would say get CJ about 10 carries and shut it down, but he needs to get a little bit of work in with this offensive line. I am not saying get him 10 carries per game. I do think, however, that he should play a good chunk of that third preseason game.