Well Titans fans, we come to the end of open training camp season with a full padded practice. It has been a pleasure providing you with training camp updates and I hope you have enjoyed!

The Titans practiced in full pads today but it was a pretty light practice with special teams drills and positions drills taking a big portion of the day. Like yesterday, I felt this was one of the more balanced  practices to date with both the offense and the defense making plays. 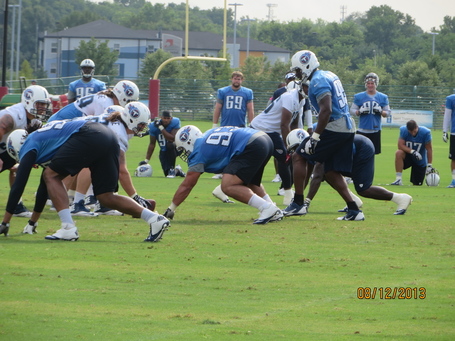 There are a couple of guys I want to talk about that I really haven't mentioned much and one is Mike Martin. The second year defensive lineman had a pretty stellar rookie season for the Titans, with 37 tackles, 3 sacks, 8 QB hits, and 15 QB hurries. Martin has been getting plenty of reps but the Titans are obviously trying to get rookie Lavar Edwards up to speed so he can work his way into the rotation as well.

Today, Martin almost had a sack and really it very well could have been since there is a prohibition against hitting the QB. He got into the backfield incredibly fast and was working with the second team. I have been much remiss in leaving him out and it isn't due to lack of plays. 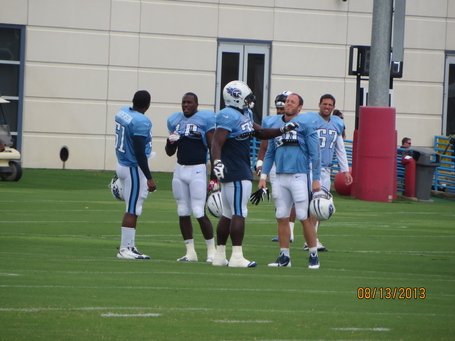 Also, a guy I had noticed but hadn't especially focused on is Kadarron Anderson who stood out to me today. He also spent some time working with the second team defense and showed some great lateral ability as well as some speed. He was particularly good in pass protection drills with the running backs. Can he make a late push to make the roster with so many injuries? The Rock Hill, SC native is an UDFA who spent some time with the Saints before being released and then being signed by the Titans recently due to injuries. He played college football at Furman. 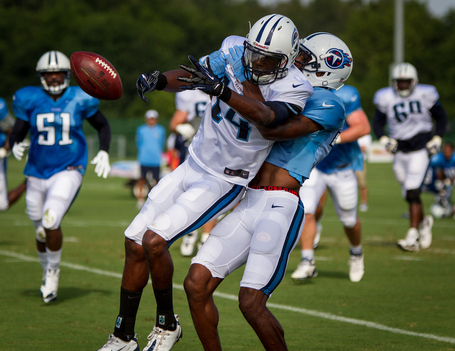 I have called the right cornerback battle close and Alterraun Verner has had a fantastic camp and has shown some great coverage ability in man coverage. He had an especially nice deflection on a Locker pass today intended for Justin Hunter. I did think Tommie Campbell had one of his better days in camp today running with the second team defense. He broke up this pass intended for Michael Preston and also looked good in coverage. I should also mention again that BW3 looks good in press and man coverage. I also haven't talked enough in these recaps over how well Jason McCourty plays. 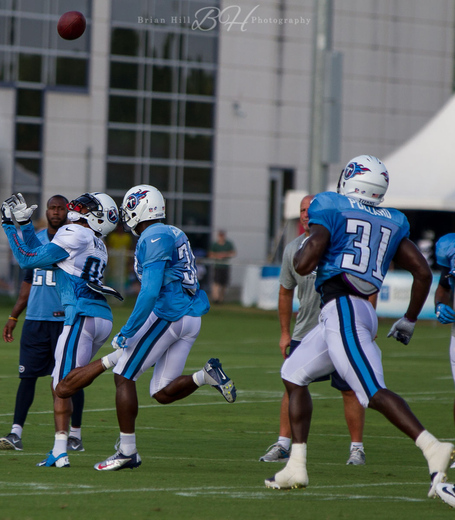 Jake Locker looked sharp today and threw this long ball to Nate Washington who scored on the play. He also threw a touchdown pass to Michael Preston. Justin Hunter had a particularly nice catch on a throw by Jake Locker. Khalid Wooten had terrific coverage on this play (he too has great  coverage skills) but Hunter made the tough grab. Speaking of touchdowns, Jackie Battle would add one on some hard running on his own. Rusty Smith threw a short  pass to Darius Reynaud who turned it into a touchdown as well. 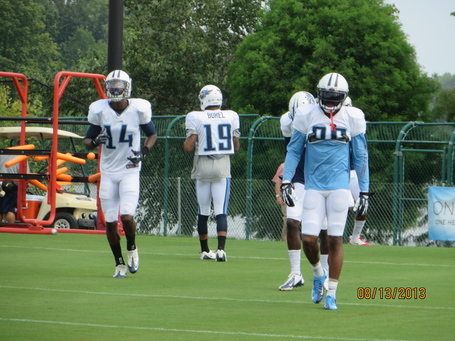 Washington continues to make nice plays in practice and in case you missed it I posted a nice one handed catch he made yesterday on my instagram page. He made another one today but unfortunately I didn't get it recorded. By the way, most of the the above photographs are courtesy of Brian Hill, who does fantastic work that you can find here. We are very grateful that he has allowed us to use his fantastic work here at MCM. 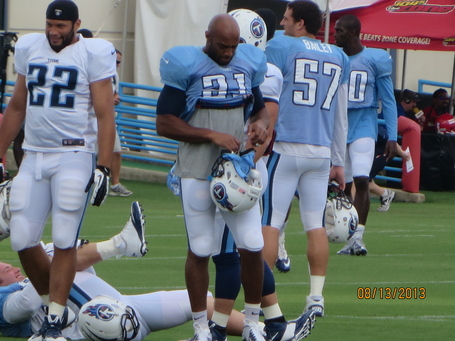 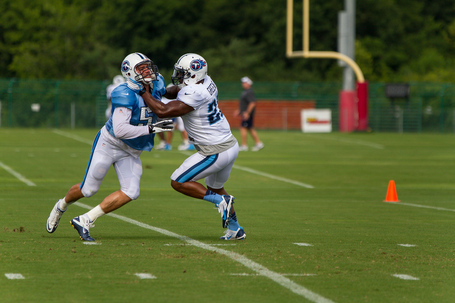 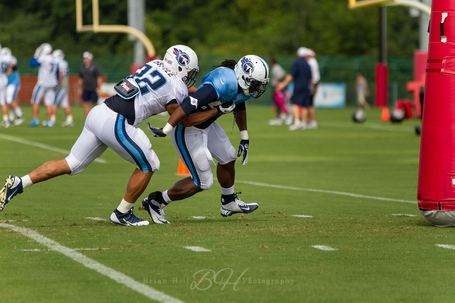 The Titans spent some time working on running back protection drills with the linebackers and well let's just say there is a ton of work to be done there. Shonn Greene had the best day but Jackie Battle is also a good blocker too. Really none of the backs did all that well but in all fairness Zach Brown and Akeem Ayers are hard to block. Also, as I mentioned before, Kadarron Anderson looked really good in these drills. 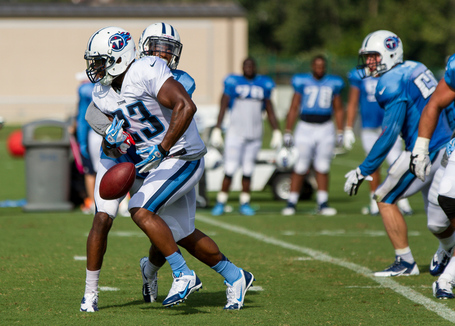 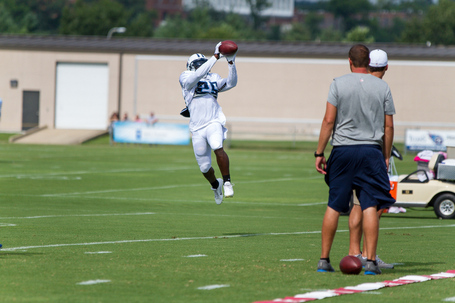 In other bad running back news, the Titans spent some time working the running backs in passing drills and Chris Johnson dropped 2 passes. Shonn Greene dropped one and would add a fumble later on in team drills. Battle, Parmele and Reynaud caught everything thrown their way. 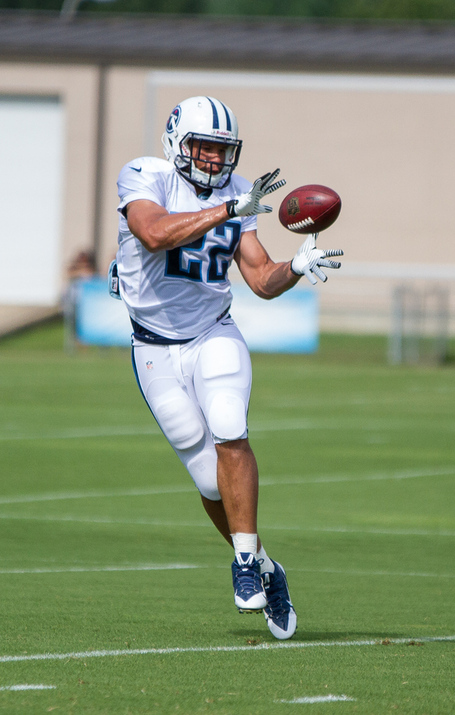 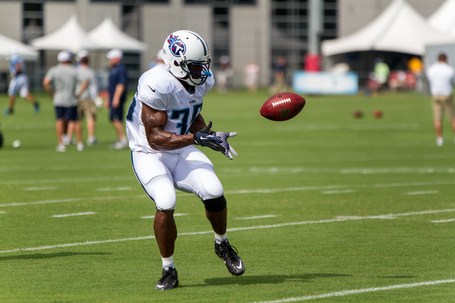 In other good news, Damian Williams took a kickoff for a touchdown in special team drills. Williams also caught a pass from Locker down the sidelines and for the most part has caught everything thrown his way. I would like to see Williams turn some of those completions into more yards after the catch, but really he has been great in camp this year.

In injury news, Rob Bironas was on the field kicking and it is reported he is expected to play Saturday against the Bengals. Taylor Thompson, Sammie Lee Hill, Greg Jones and Daimion Stafford won't play Saturday if they can't practice Thursday. Zaviar Gooden, Quinn Johnson, and Markelle Martin are out versus the Bengals. Britt, Wright and Stewart should play Saturday as will rookie center Brian Schwenke.

There you have it. The final recap for open practices of the 2013 Titans training camp season. I hope you have enjoyed them! You can find vines and instagram videos posted on my twitter page at @SportsBySharona. Also, my photographs for today can be found here.

Thanks once again to Brian Hill Photography for allowing us to use his work. If you missed it above, you can find his outstanding work  here.