Fantastic execution on a basic playcall led to one of the most explosive plays of the game against the Redskins.

Share All sharing options for: Film Review - Titans/Redskins: The Counter

On the Titans third drive against the Redskins, Chris Johnson had been relieved of his duties and Shonn Greene was inserted at running back.  The play below is nothing revolutionary.  It's a basic counter play, but the execution is flawless.  The backside of the play, which looks like the frontside at the beginning, essentially blocks down toward the sideline.  Note, however, that with the exception of Warmack pulling, this initially appears like a zone play.  The backside blockers (everyone but Warmack) block down.  Warmack pulls and kicks out the force player on the edge, while Quinn Johnson seals off the inside defender.  Greene does the rest. 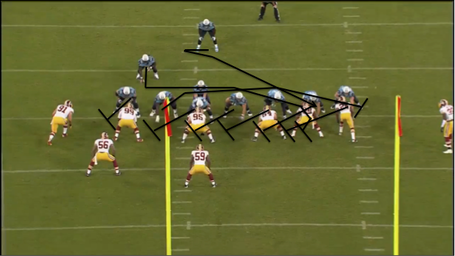 A few things caught my eye on this play: