The Titans have updated their depth chart online.

During the slow off season, we've had some fun looking at, and speculating on, the Titans official depth chart at Titansonline.com. There have been some interesting oddities in the past, such as Craig Stevens being listed as the starting fullback, but it seems as though the team has done some official rearranging. 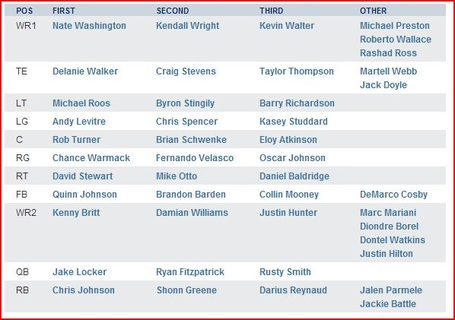 As you can see, the tight ends are now properly ordered.  Quinn Johnson is the starting fullback as he should be, but somehow Brandon Barden snuck in as the back up fullback.  I'm not exactly sure what all goes into this, but I know not to read into it too much. Either way, I don't see anyone behind Johnson's name on the FB line making the team.

The most interesting development here is the center position.  Velasco had a good year last year and was hampered by incredibly poor play on both sides of him.  Even so, the Titans signed veteran free agent Rob Turner to come in and compete for the job as part of their offensive line overhaul.  So far, Turner has gotten the coaches attention in camp, and took all the first team reps in Thursday's preseason match-up against the Redskins.

If the online depth chart has anything to do with it, it looks like Turner's spot as the starting center is his to lose.

Other Notes of Interest