The Titans showed a defensive look against the Redskins that helps give a little clarity into offseason personnel moves. 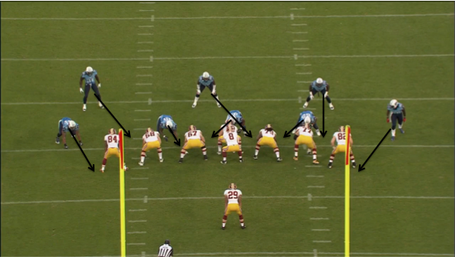 I've been going back and watching the Titans first preseason game in a little more detail.  A few plays jumped out at me, and I hope to highlight those this week.  The first was the front the Titans showed against the Redskins on their third drive.

A number of things intrigue me, especially as it relates to news we've heard trickling out of camp this offseason.

Specifically, how did Pitoitua, Morgan, and Ayers all fit together since they've all been getting snaps at starting "end"?And, here I have my answer.  The front here will function like a 5-2 on this play, but the alignment could also allow it to operate as a 4-3 under.

In a typical 5-2, you've got a NT, two DTs, and two DEs.  The original formation had some guys up front 2 gapping.  Almost always the NT, and typically the other two DTs as well.  We aren't two gapping here, at least best I can tell.

One last thing, before we get to analyzing the play.  The versatility of Ayers is what makes this interesting.  You can call this a 4-3 Under with a Sam Blitz.  Or, just a standard 5-2.  Regardless, what makes this tricky is Ayers' skillset.  This alignment doesn't tip whether he's in coverage or playing the "end" spot.

Now, note the linebacker and safety play.  Pollard is responsible for the C gap.  When Hill slants inside to the weakside A gap, Brown scrapes and fills the A gap he vacated.  Fokou does the same thing behind Pitoitua.  The result is a gap sound defense and no where for the back to run.  Helu probably should have pressed the hole to the strong side, but that would have been tough as well.

I thought there were struggles against the run in this game, and this run defense remains a question mark.  But, it was good to see how everyone fit in the defense.

I posted these two in the post game threads.  Just thought I'd throw these up in case anyone missed them.

*Sorry about the inconsistent formatting on the final GIF here.